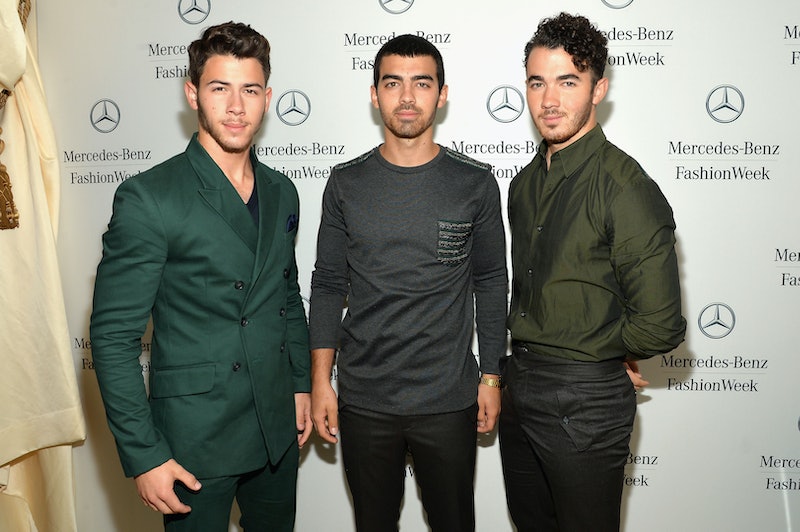 If you're a long-time JoBro fan, then you know the rumors. The ones that hint at new Jonas Brothers music, a tour, and a documentary. These new rumors might not sound that much different than all the others that have come before; there does seem to be a resurgence of JoBro fever every few months that makes fans go a little crazy with nostalgia. However, there's a different feeling in the air this time around, and the Twitter reactions to the Jonas Brothers reunion rumor makes these reports feel much more real.

According to a report, first from The Sun and then Us Weekly, the Jonas Brothers are working on a reunion that would include a documentary and a tour. While it hasn't been confirmed by the brothers — Bustle has reached out to representatives for Nick, Joe, and Kevin Jonas for comment, but had not heard back at time of publication — it's still exciting to fans.

When the Jonas Brothers broke up in 2013, leaving an unreleased fifth album and a cancelled tour in their wake, it was an abrupt end to a rather popular group. At first, as reported by E! News, they said it was just their time to end things as a band and go their separate ways. Three years later, during an appearance on Watch What Happens Live, however, Nick said that he brought up the conversation about unresolved problems, which lead to the split. And, the rest is been history: Kevin is now a father to two young girls, Joe fronts DNCE and is engaged to Sophie Turner, and Nick has a solo career and just married Priyanka Chopra.

Whether or not rumors of a Jonas Brothers reunion are true, they certainly have fans in a flurry of excitement. JoBro fans never left the fandom, and they're here to revive it at any given moment. Even if they weren't planning on coming back together, maybe they will now that the fans have spoken.

In a 2009 interview with Barbara Walters, the Brothers said their fans were in it for the long-run. After years without a joint project, and this big of a reaction at the mere thought of a reunion, it's safe to say they were right.

It's true: Nick Jonas liked a tweet about being front and center at the reunion concert, and yet another from a fan who said that a reunion concert would be the first time they can see the JoBros live. Not necessarily a confirmation, but not a rebuttal either.

There's always going to be fights about who's a "true" Jonas Brothers fan and who deserves to be noticed by the band. So just make sure you know more than just the main bops if you want to join the fun.

Adulthood, college, and real-world experience isn't going to take away the fact that you're a JoBro fan at heart. OJD (Obsessive Jonas Disorder) is gonna hit ya like this fall, for sure.

As Nick said in the Barbara Walters interview, their fans are gonna grow with the brothers, and now that means most of them are 21 and ready to act like it. This amazing rendition of a drunk JoBro fan jamming out to "Lovebug" is scarily accurate.

6. Bring On The Jams

Despite the rumors including the prospect of new music, there's nothing like their original bangers, and you can bet your bottom that "When You Look me In The Eyes" is a fave.

Again, the Jonas Brothers broke up days before their last tour was supposed to start, so the trust issues are real for fans. But while they might have broken fans' hearts before, it's certainly not enough to stop them from hoping again.

Life will be put on hold if the Jonas Brothers go on tour again. They need to know this, and they need to take fans' devotion seriously, and hurry up with the new music and reunion concert already.

9. What The World Needs Now

The world wasn't this screwed up before they broke up. Not saying that they'll fix everything, but like, that's not a coincidence, right?

This meme of three people dancing to an Irish jig is everywhere, and putting it to a little ditty called "SOS" makes it fit this situation perfectly. Plus, fans know this is exactly what's going to happen at one of these concerts.

Your mother, God bless her soul and patience, was a staple figure in your Jonas Brothers love. She drove you to concerts, sat beside you during your JoBro breakdowns, and helped hand you tape for those posters. Now, letting her know your obsession will have a new life in your 20s, she'll surely be ecstatic. Or make sure to be out of town during the concert.

In the early days of the Jonas Brothers and YouTube, fans were able to see the brothers be their goofiest selves. And if you've been around since this video was created, or since the "Mandy" video, you deserve everything.

These reactions on twitter are just some evidence that Jonas Brothers fans are hilarious and ready to strike at a moment's notice. Meaning that a reunion and tour will always be something they want, it's just up to the Jonas Brothers to bring it.

More like this
Now That 'Renaissance' Is Here, Let’s Revisit Beyoncé’s First Solo Album From 2003
By Grace Wehniainen
Selena + Chef Season 4 Was Filmed At Hannah Montana's Old Malibu House
By Jake Viswanath
Harry Styles' 'X Factor' Audition Didn’t Start Off As Well As You Thought
By Jake Viswanath
Dan Levy Showed His Mariah Carey Devotion Yet Again With A “Honey” IG Story
By Grace Wehniainen
Get Even More From Bustle — Sign Up For The Newsletter