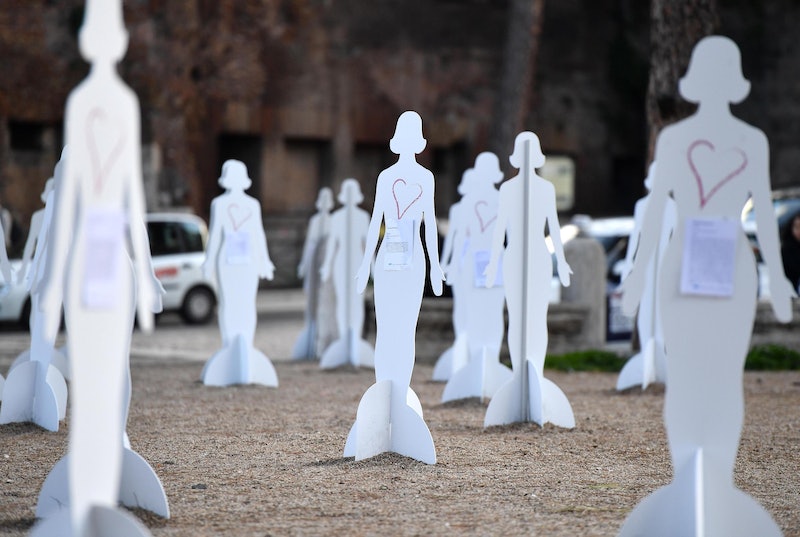 Femicide is a term which means the murder of a woman or girl because of her gender. Most often, these cases involve a man killing a woman in a domestic incident. However, any murder of a woman can technically fall under this umbrella. Women's Aid has just released its latest census on the issue and the UK femicide statistics prove that the hate crime is only growing.

The Femicide Census was developed in 2015 by Women's Aid and campaigner Karen Ingala Smith after they realised European research existed on the issue. Each year, they track the murder of women in the UK and log details of the incident on a database. This dataset now contains information relating to the murder of over 1,000 women.

The newest census has revealed that 139 women were murdered by men in the UK in 2017. This has increased from 113 similar incidents in 2016 and 119 in 2015. A huge 76 percent of these women knew their killer, while 30 of them were murdered by a stranger. (Of this 30, 21 lost their lives in a terrorist attack.) Almost half were murdered by their current or former partner, while over half were murdered inside their own home or at the home they shared with the man who killed them.

The Femicide Census also looked into what is known as 'overkilling'. This is where the force or method used in the murder was greater than the one that would have been required to kill the person. Ingala Smith and Women's Aid found that 40 percent of murders utilised overkilling and that this statistic "challenges the myth of accidental killings and highlights the brutality of the misogyny that men bring to their violence against women and sometimes an intent to humiliate, brutalise, maim, or desecrate."

According to the census, the statistics are now so dire that one woman was killed by a man in the UK every three days between 2009 and 2017. “Time and time again, we hear of cases where a woman has been killed by a man as an ‘isolated incident’; yet the latest Femicide Census report shows yet again that this is not the case,” Katie Ghose, chief executive of Women's Aid, told the Guardian. “The majority of these cases are not isolated incidents. There are too many similarities in the circumstances where women are killed by men.”

Ingala Smith also told the paper that "violence against women continues to be overlooked and made invisible." She pointed out some further surprising statistics relating to age, stating that 40 percent of women killed by men were aged over 45 and 14 percent were 66 or older.

Although the government is currently considering a new domestic abuse bill, Women's Aid and Ingala Smith want to emphasise these statistics in order to push for real change in reducing the number of violent incidents against women. They are asking for the government to take the census into account when introducing new laws and to ensure that public services such as police and social services are also aware of the level of violence.

If you or someone you know is experiencing domestic violence, reach out to Women's Aid for advice and support.