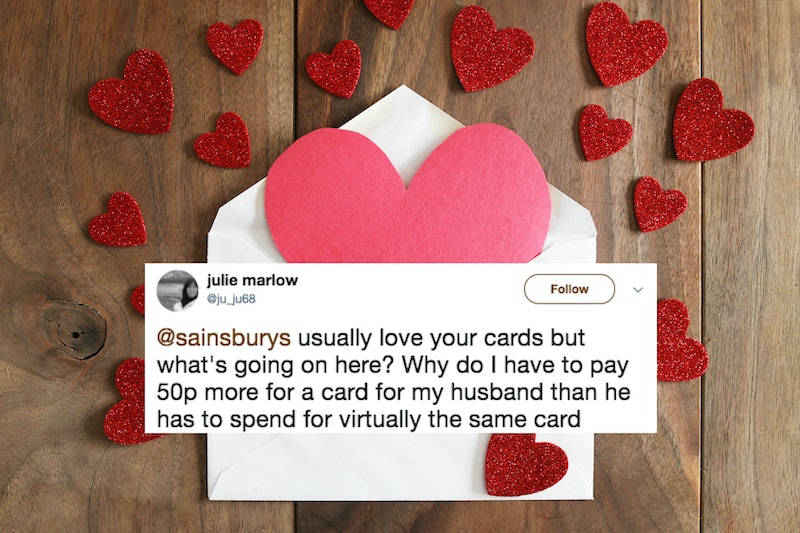 A British grocery store is promising to reprice its Valentine’s Day cards after one patron noticed that a "Husband" card was more expensive than a "wife" card despite the two greetings having a nearly identical design. A Twitter user shared a picture of the differently priced cards found in Sainsbury’s, a supermarket in the UK. The wife card was being sold for £2 and the husband card was priced at £2.50. A Sainsbury’s spokesperson gave the following statement to Bustle via email: “We appreciate this error being brought to our attention. Both designs are now available in store for £2.”

The original tweet, directed to Sainsbury’s official Twitter account, asked, “What's going on here? Why do I have to pay 50p more for a card for my husband than he has to spend for virtually the same card.” The Valentine’s Day cards in question each featured an extremely similar design, both with similar photographs of a stuffed animal dog and a fuzzy heart. The card for "wife" pictured two plush dogs with one of the dogs featuring three small gemstone attachments on the card. The "husband" card featured a photo of just one of the aforementioned plush dogs. Despite the "wife" card featuring the additional gem attachments, it was price 50 pence cheaper than the "husband" card.

Valentine’s Day is by no means a cheap holiday. Last year, we collectively spent an estimated $18.2 billion on Valentine’s Day in the United States, according to a report from USA Today. This year, the National Retail Federation estimates we’ll spend a record $19.6 billion. That averages out to be more than $147 a person. (Y’all are buying some fancy greeting cards.)

Despite spending so much on paper greeting, Valentine’s Day is not the most popular holiday to exchange cards. According to the Greeting Card Association, Christmas is when we buy the most greeting cards with an estimated 1.6 billion cards being bought during the holiday season. Valentine’s Day comes in second with Mother’s Day as a relatively close third. It’s worth noting that Father’s Day is the fourth most popular card-buying holiday. However, significantly less cards are purchased for our dads than our moms: 133 million cards for Mother’s Day compared to 90 million for Father’s Day.

Keele University economics and finance lecturer Dr. Panos Sousounis hypothesized to BBC this difference in spending habits may have been the reason behind Sainsbury’s differently priced cards. “Retailers think that women are more willing to spend more money on a Valentine's card. So they price it a little bit higher.”

However, as per the store’s statement, Sainsbury’s insists the price difference was not intentional.

Retailers have been known to price similar products differently depending on the gender of the intended consumer. This is more commonly known as the “pink tax.” Everything from razors to toys have been found to be more expensive simply for featuring a fuchsia hue and being placed in an aisle labeled “For Ladies.” However, consumers are getting smarter about spotting these gendered differences, and some companies like Cards Against Humanity are even calling it out marketing campaigns.

While Sainsbury’s pricing difference doesn’t appear to be intentional, it unfortunately wouldn’t be uncommon or even unexpected. If nothing else, it’s a reminder to keep an eye out for this kind of discrepancy in gender-specific pricing at Valentine’s Day and all year round.