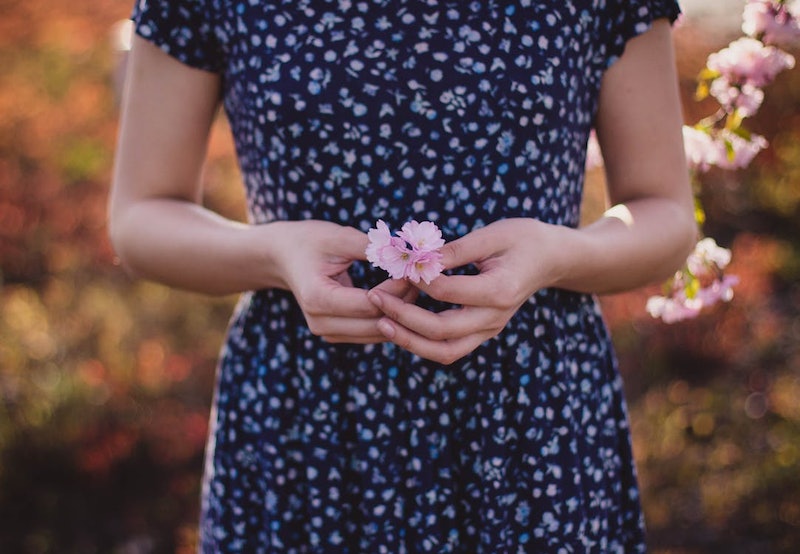 Having your period is not always pleasant, or fun, or convenient. In fact, it can be the exact opposite. But one thing everyone can agree on is that menstruation is natural. Or can we? A sect of "clean eating" and vegan bloggers are calling periods toxic, proclaiming that heavy or painful periods are signs of an unhealthy lifestyle. These dangerous claims and the dissemination of misinformation on vegan and raw food blogs and popular YouTube channels could lead to some serious consequences for women, especially teens, that may take their advice at face value.

First reported by Broadly, there's a trend of vegan and raw activists claiming that "using your diet to achieve a sporadic and light period — or one that's completely nonexistent — is healthier and more natural." Among the most notable examples is a 2013 video by perky Australian vlogger Freelee the Banana Girl (named after her penchant for eating up to 51 bananas a day) titled, "How I lost my period on a RAW VEGAN Diet." In the six-minute video, which has gained nearly 400,000 views since its posting, Freelee explains how she lost her period for nine months after adopting a raw, vegan diet. Formerly beset with heavy, uncomfortable periods, when her period did eventually return, the diet guru claims it was so light that she didn't even notice when she had it.

"I still believe that, largely, menstruation is toxicity leaving the body," Freelee states in the video. "So a lot of people are having these heavy, heavy periods and painful periods because they have a toxic body or have a toxic diet and the body is trying to eliminate that toxicity and get it out."

Of not having her period, she says, "It felt good, it felt right, and at the time I think it needed to happen for my body to balance out."

What Freelee describes is amenorrhea, or the absence of a period in women for three or more months. This can be caused by a variety of factors, such as pregnancy and breastfeeding, hormone imbalances, taking contraceptives, or menopause. A missing period can also be a result of low body weight (which halts normal hormone production), stress, or rigorous exercise. Professional athletes and women suffering from eating disorders, such as anorexia or bulimia, commonly have infrequent periods, or stop bleeding all together. Freelee briefly addresses amenorrhea in the video, musing, "Is it unhealthy? I don't know."

But Freelee isn't the only internet personality encouraging women to "hack" their diet in order to alter their period and PMS symptoms. Miliany, who runs the blog RawVeganLiving, espouses similar tactics to rid girls of their pesky "unclean" periods, telling Broadly:

If a woman or young girl decided she wanted to stop menstruating or lighten up her heavy periods, then I would recommend a raw foods diet to help them with that. The industry has done a great job of brainwashing too many women into thinking that if they do not get their periods on a monthly basis, that something is wrong with their body and hormones.

Yet another blog post published on Wausau News touts a raw, vegan diet as a way to get rid of periods and discomfort. "Most women, including myself, experience menstruation because they are not truly clean on the inside. Menstruation is the body’s desperate attempt to free itself from toxins," the post states.

Little attention is paid to what the side effects could be for such a drastic lifestyle change, and doctors agree that changing your diet to stop menstrual cycles is just not healthy.

"It's difficult to recommend a strict vegan diet without investigating hormone levels and endometrial health in these women," Dr Jackie Maybin, a clinical lecturer in obstetrics and gynecology at the University of Edinburgh, told Broadly. "It's likely that the complete absence of periods — amenorrhea — indicates that ovulation is not occurring and could have a significant negative impact on reproductive health."

The best thing one can do is continue to eat a balanced diet and try to cut back on salt and caffeine when Aunt Flo comes to town.

More like this
How To Fight For Reproductive Rights, Based On How Much Time You Have
By Courtney Young
Michigan’s Governor Is “Going To Fight Like Hell” To Protect Abortion Access
By Andrea Zelinski
16 Novels That Paint A Realistic Portrait Of Abortion
By K.W. Colyard
6 Abortion Advocates To Follow On TikTok
By Sara Youngblood Gregory
Get Even More From Bustle — Sign Up For The Newsletter