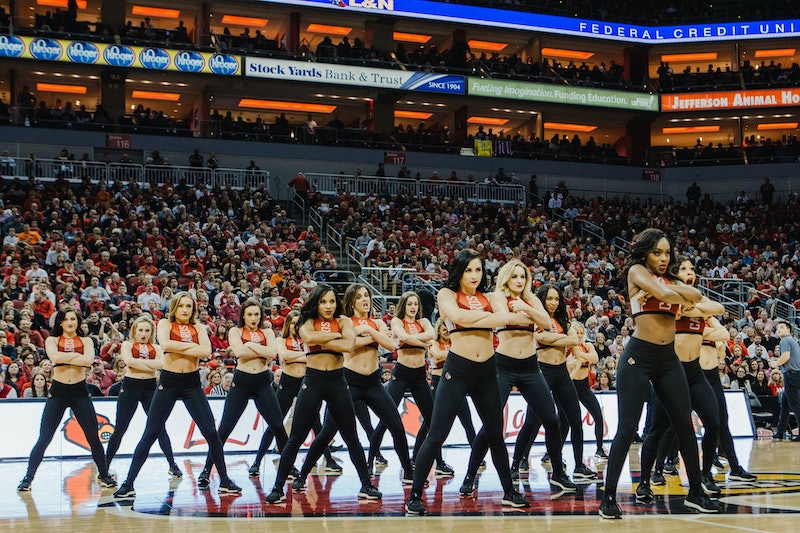 The new Lifetime reality series So Sharp premieres on July 26, and in the tradition of the network's performance-based Dance Moms, will showcase the talented Ladybirds, the national champion University Of Louisville dance team. You may not have seen the hard-working troupe perform before, but if you're even a little bit skeptical about the team's record or their achievements, these videos of the Ladybirds dancing will prove to you that Coach Todd Sharp's intense coaching style and the ambitious routines he teaches are worthy of the many accolades they've received. As the series will probably demonstrate, the team's 17-and-counting national championships are the result of a lot of very hard, very long hours of practicing and training.

The team's style is probably best described as a combination of the athletic stunts of a cheerleading squad plus a fusion of contemporary, ballet, and hip-hop dance styles — not to mention seamless teamwork. Sharp is "the winningest coach in the dance world," according to Lifetime, and the series will spotlight his "exacting perfectionism and his hard fought coaching style."

The Ladybirds are as elite as the male athletes they support. And with a quick search on YouTube, you can find plenty of evidence that their impressive record and flawless reputation are well earned. Here are nine videos of the Ladybirds performing to psych you up for the So Sharp July 26 premiere:

To begin, here's a look at the era before the team went "so Sharp." While the star of the series is credited as one of the coaches in the clip, he was still sharing duties at this point. But what will become recognizable as his signature style is already apparent.

These costumes and moves suggest that Sharp was a fan of Step Up 2: The Streets. The women are still the star of this show — with no offense to Kyle, who does easily keep up with the dance team.

No offense to this throwback video of a Ladybirds team from almost a decade ago, but while their precision was right on, it looks like Sharp's choreography has gotten more complex over time.

This clip of the Ladybirds of four years ago shows a team that's incorporated more impressive gymnastics — like half the team doing headstands — into its routines.

It's always a risk to film on the field, but I do wish that random coach hadn't walked through the shot and interrupted the expert hairography on display.

In this video, the excitement of the parents cheering for their daughters makes up for some unfortunate framing towards the end of the video that just barely cuts off some of the higher flips and tricks.

Fortunately, this video doesn't have any framing issues, so you can see how this recent Beyoncé/Rihanna mashup number ended with a coordinated group leap into splits.

The Ladybirds win championships because they are incredibly precise and seem to move as a unit. Out of all of their impressive tricks in this routine, flipping and landing in a cross-legged position has got to be the most jaw-dropping.

The Ladybirds are the reigning national champs for a reason. They have the moves, they have the ability, and they have Sharp's careful eye and imaginative style backing them up.

They're succeeding in a niche sport, but So Sharp may bring The University Of Louisville Ladybirds well-deserved recognition beyond the dance team world.