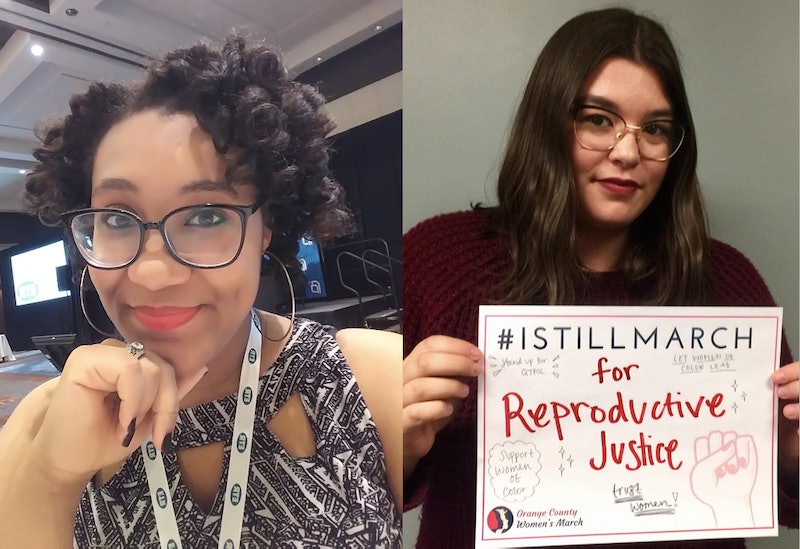 It's been 45 years since the Supreme Court's landmark Roe v. Wade decision, but the fight to secure women's reproductive rights still is ongoing. And the battle isn't just being waged in state legislatures and between lobbying organizations anymore: Young women in high school and college who are sick and tired of older generations dictating what they can and cannot do with their bodies have taken matters into their own hands.

Whether they're volunteering at their local women's health clinics, advocating for medication abortion pills on campus, or training to become peer sex educators, young women are bringing the fight for reproductive justice down to the level of their own communities — and bringing their fellow students on board, too. Bustle spoke to seven women under 21 who are getting their peers information and advocating for reproductive rights.

Me and four other ladies are trying to start a feminist group on campus, right now we’re putting in our application to try to be an official organization on campus because that’s something that isn’t a thing in my school.

In Hampton University, we have distress columns on campus with a red button; they’re all over campus. If you’re walking by yourself and you get attacked you’re supposed to be able to use it to contact the police if you press the button. But none of them work on campus. Stuff like this you can change, and nobody else has stood up to Hampton. They need someone to shake the table and call them out on these things.

Fighting for reproductive rights is very important now especially w our current leadership, as far as the president’s concerned. There’s no reason in the world someone else should be able to control your own body, whether it be birth control, abortion, anything. You’re entitled to your own lifestyle, regardless of what it is.

If we don’t fight for ourselves, who will?

I am part of the 1 in 3 campaign with Advocates for Youth. I just participated in a Just CARE (Campus Action For Reproductive Equity) event, where we lobbied for SB 320, which would allow medication abortion pills on student health centers at California state campuses.

I started getting involved in activism my freshman year of college because that was actually the first time I had access to language surrounding reproductive rights and justice. I was raised in an extremely conservative home. When I was nine I was taken to Tea Party rallies, exposed to a very negative view of abortion and everything surrounding reproductive rights and what i’m now fighting for.

In high school my views started changing, I completely went from a mini Republican to a full-on progressive, and through that time I educated myself on reproductive rights — specifically Planned Parenthood because Planned Parenthood was always like a topic in my household about how awful they were. I started to realize what I had been taught earlier really wasn’t the truth and how abortion access helps the most marginalized people and how common it actually is.

I started working and volunteering with Planned Parenthood when I first became a patient which was about a year ago. And then I realized how important it is — with the new administration I knew there were going to be attacks on women's health care, and I wanted to focus on fighting for that.

My sister doesn't have health insurance, so the only health provider she can visit is a Planned Parenthood. Both immigrant rights and reproductive rights are being attacked by the administration, so it's really important to me to keep organizing and keep informing people my age.

Back in 2012, there was the Adios Arpaio campaign and it actually went into my high school. I attended that event and we started by just registering voters in downtown Phoenix — that day I realized how important it is and how much you can make a difference in just one day by doing this type of work.

It's important for us to be involved in such a young age; people my age don't really think about these issues, but we are the future and we should be concerned with issues in our community. This administration I feel has pushed a lot of young people like me to come out and get informed. The number one step is to be informed, then try to take action.

I’m also a student organizer for the 1 in 3 campaign, and I'm the vice president of my school's Unite for Reproductive and Gender Equity (URGE) chapter. I’m planning a protest in February that is kind of like Slutwalk but not. But it’s the same idea, it’s a protest and march where we ask people to wear provocative clothing to fight victim blaming and rape culture that’s on our campus.

There was an article that went viral over the summer on BuzzFeed about a rape case that happened here and it’s caused a lot of tension on the subject so that’s something we’re working really hard on. Her name was Megan Rondini. It happened the year before I came here and I didn’t even know about it until the article went viral. And it was kind of a shock you know, as someone who organizes in this work and as a survivor myself it was really hard to hear that. But I think a lot of good work has come out of it.

Growing up as someone who identifies as LGBT and someone who is sensitive to issues of sexual liberation and victim blaming and things like that, I'm hyper aware of how these issues can really detrimentally affect young people in particular. And honestly my greatest priority in doing this is creating a safer Alabama for young people to grow up in and properly have access to do whatever they want with their bodies in a safe way.

I am currently one of the organizers at Illinois Caucus for Adolescent Health (ICAH) for the CHAT Youth and Adult Partnership Network. I am in the Title IX group and we’re focusing on creating a town hall. Title IX is a law that says no one should be discriminated against for their sexual orientation in schools. What we’re trying to do is to raise awareness and share stories about how there is still discrimination against queer and trans students, pregnant and parenting students, and survivors of sexual violence.

One of my friends Will told me about ICAH’s summer program that was going to happen in August, The Reproductive Justice Action League. I applied and then got called in for an interview. They told me what ICAH was about and that we would be working on getting Governor [Bruce] Rauner to sign HB40. Then I just thought this place is amazing! I want to be a part of this and advocate for change!

It’s important for young people to be aware about health care rights and our limited access. With the knowledge and loving support from ICAH we can ensure that all people, young folks included, will have access to safe health care.

Our clinic in Tucson is the only one we have and I volunteer at the Health Center Advocacy Program. I do a lot of the Raiz work outside, that's like partnering with other organizations like Mi Familia Vota, which is a voting organization in Tuscon; being able to vote and represent your voice on these issues that will affect your reproductive rights. [Raiz is a Planned Parenthood program that helps local volunteers organize around issues affecting the Latinx community.]

When I was a freshman in high school, I experienced sexual assault. That whole experience was very hard and I didn't really understand what happened. I didn't have sex ed that was teaching me about consent. When I was a sophomore I met one of the organizers at Planned Parenthood and her campaign at that time was comprehensive sex ed in the school district that I went to. So that's how I got involved because I wanted to help empower other students because I want them to know how to protect themselves and empowering them to have control over their own body.

I believe that with this new generation we have to fight against the older generation. They have to understand that our viewpoints and our opinions are much different from them. This administration has really emboldened the types of anti-choice, anti-birth control advocates. This is the year that all of the millennials will be 18. If we don't get out and fight, nothing is going to change. We're such a powerful voting bloc.

When I was 16 and in high school, I became a peer sex educator with my local Planned Parenthood and taught peer sex ed in my high school.

Young people are some of the people most affected by reproductive justice. I, for example, became a peer sex educator because — my story’s unique in the sense that I had pretty solid sex ed. In my high school there were two teachers who taught sex ed. Most of my friends were in the other teacher’s class, and the other teacher didn’t teach them anything; she was very shame-y and didn’t teach about condoms or anything positive in my opinion. And I realized there should not be a brick wall and a blackboard separating people that got pretty good sex ed — considering — and people that got horrible sex ed. So I thought, well f*ck it, I’ll do it. Sometimes young people have to step up when the other people around either aren’t able to, or don’t want to.

My teacher, for example, tried the best she could but she was trying not to break any laws. She wanted to teach better sex ed but she couldn’t. There’s a policy in place that prevents teachers from giving medically accurate information, and as a student, I wasn’t bound by those laws.

Reproductive rights have been targeted for so long in this country and right now I think we have a decision to make about what we want to stand for. We are in such a good position to say no and fight back. I feel like we’ve been reinvigorated. We’ve had some wake up calls and some realizations that we’re on a road that we do not want to be on. We have the power to change things.