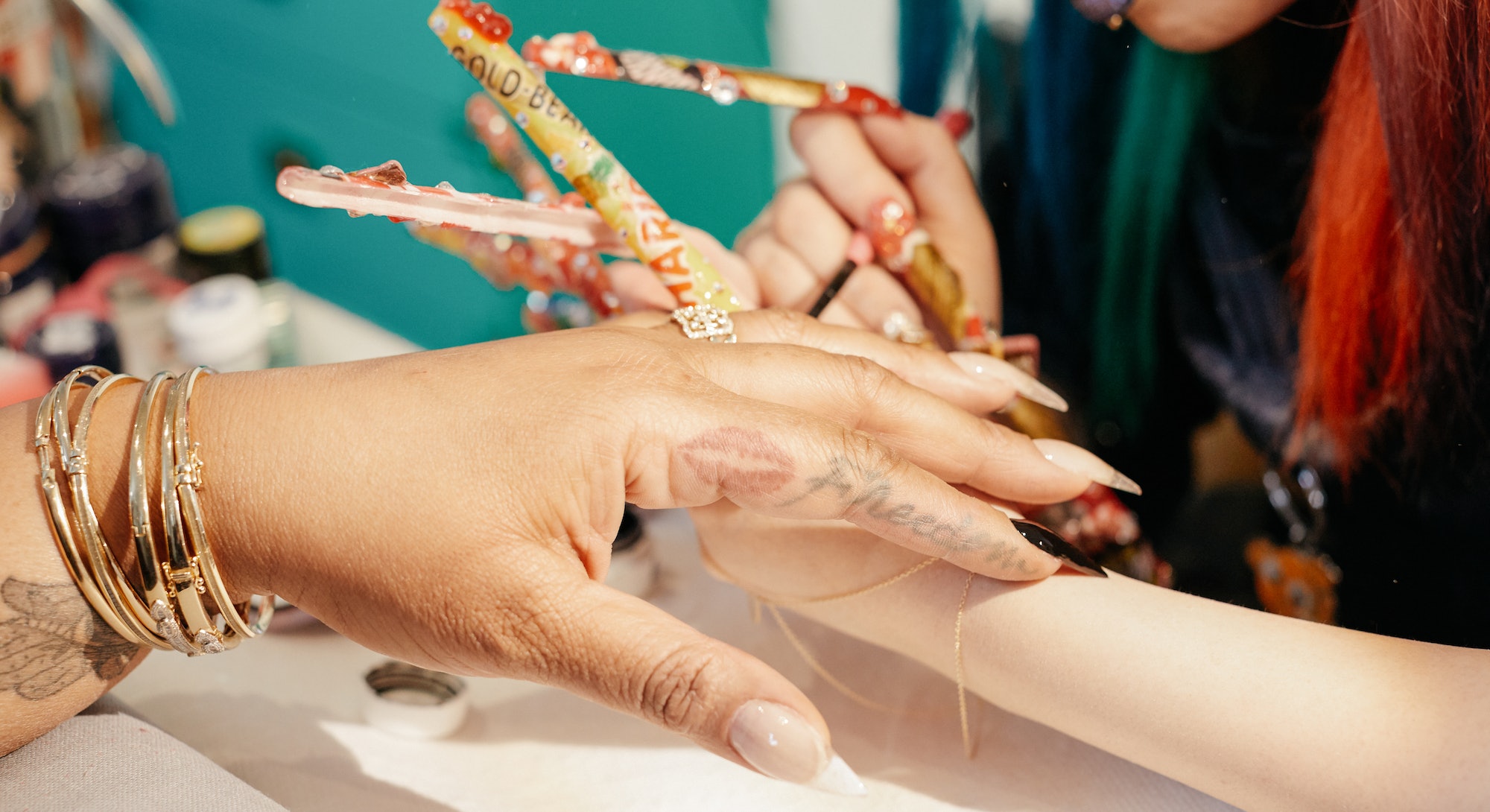 In a world now full of cosmetic enhancements, questions like, "Are those your real lashes? Your real hair? Your real nails?" regularly pepper everyday conversations. Extra-long fake nails and lashes aren't primarily designed to be a secret anymore, so it's gradually become socially acceptable for people to inquire whether or not an enhancement is natural. It's almost as if people can't help but confirm what they already must know logically — that, no, extra-long, finely-pointed stiletto acrylics do not grow on someone's hand like that. But for the people like Kate Freeman, who wear these bedazzled, carefully sculpted acrylics every single day, the nails are as much a part of who they are as anything else. Freeman, a stay-at-home mom, tells Bustle that people often ask if her acrylics are her "real nails," and she's always confused by the question.

"I'm always like, 'Yes, those actually are my real nails,' because my real nails actually are that long, but they have like acrylic over them," Freeman, who gets her nails done about twice a month, says. For Freeman, acrylics are actually more about practicality, as backward as that may seem.

"I couldn't have them long in like my daily life if I didn't have acrylic over them, they just... wouldn't be practical," Freeman tells Bustle, explaining how they would ultimately break or chip, while acrylics are able to withstand more wear-and-tear.

Diahann Warner, a consultant and mother who lives in Princeton, New Jersey, comes into Manhattan twice a month to get her acrylics done (although she admits that in her dream world, she would come every single week). Warner says that living in a small town often causes people to ask questions about her nails — or simply just stare.

"I remember one of the first times I was standing at the bus stop after having my nails done... and we usually stand together as a group as the kids get on the bus [and] make small talk," Warner tells Bustle. "I noticed that three ladies were just staring at me... so I kind of turned my head away like, 'What the hell, do I have food in my mouth?' One of them walks up to me and goes, 'Excuse me, can I ask you something? Can I see your hand?' I still didn't get it, so I showed her my hand and she calls the other two ladies over, and she goes [gestures] and she's like, 'Are those your nails?'"

Warner tells Bustle she often hears the judgment in this question, but sometimes it leads to an interesting dynamic between herself and the curious stranger.

Warner tells Bustle that she told the women yes, those were her nails — the acrylic is just added onto them. Then the women asked about the intricate polish design and embellishments (an illustration of lips on some nails, and rhinestones on others). The conversation that follows, though initiated by somewhat irritating question, allows Warner to make new friends wherever she goes.

"We literally stood there for 20 minutes and I explained the process," Warner says. "It's become a thing now where when they see me... they call me over to see my nails. And they, like, gawk at [them]."

Warner explains that getting her nails done, and making sure they are perfectly shiny and polished has become more than just a hobby — it's a requirement.

Warner and Freeman are both are religious about getting their nails done by the same artist — Yayo at Vanity Projects in Manhattan. Yayo, a 28-year-old nail artist originally from Yokohama, Japan, has been doing acrylic nails and intricate nail art for eight years and working at Vanity Projects for two years. And she does it all with 6-inch-long acrylic nails on the tips of her own fingers. Those nails, each of which Yayo designs herself, are shockingly long in a way that regular, everyday acrylics just aren't. They make your standard acrylics look like child's play.

Yayo poses with her acrylic nails.

The nails, which take Yayo two days to decorate and design each month, are just part of who Yayo is now. And she tells Bustle she's used to getting questions about her nails — questions that come every single day, without fail, she says.

"Someone once called me a Gremlin, but I don't care," Yayo says. "I like my nails and that's all that matters to me."

While you would think that Yayo would have difficulty texting or even just doing her job every day — something that requires extreme precision and concentration — she tells Bustle she's used to the nails by now... but does admit that opening a can is still pretty hard.

"It's funny, because my husband never totally got why I was like so into [the nails]," Freeman says. "And then one time we were on vacation in the summer, and I had like a really like flashy, like broken glass manicure and everyone would comment on it and... start so many conversations, and he was like, 'Oh, now I get why you like it, because you can talk to people that you otherwise wouldn't talk to...' And I was like, 'Yeah, exactly.'"

Freeman poses with her finished nails.

Warner tells Bustle that living in a small suburban town and having over-the-top, intricately designed nails has opened up countless conversations with other people. And, more than that, it allows her to challenge the idea of what a mom has to look like.

"I think people, when [they] hear that you're a mom... people don't expect you to want to put acrylics on and get all of these designs and stuff," Warner says.

All three women tell Bustle that they like the attention that having perfectly done nails brings them. But when you really listen to them talk about their nails, you quickly realize that attention for attention's sake isn't what they love about the conversations their manicures spark. Their blinged-out nails are extensions of their unique personalities — and, for once, their personality is in the spotlight. Their nails showcase a part of their personalities that isn't necessarily front and center every day.

"I worked in a corporate environment... for many years. I had to wear a suit every day — very rigid," Warner tells Bustle. "When I quit, I started getting tattoos on my fingers... started wearing all my jewelry, because I felt like for so many years I could not express myself in any way."

Warner admits that she certainly notices a sense of judgement from some people when it comes to her nails, but also recognizes that how the world view nails is changing. More and more, Warner says she thinks the world sees acrylic nails as a fashion accessory — just another way to showcase who you are.

Freeman poses with her finished nails.

"I remember sitting [in Vanity Projects] one time getting my nails done, talking to the lady that was sitting next to me. She's a lawyer. And she was visiting from Boston. And she got a different ice cream pop drawn on each of her nails," Warner says. "I mean, you would never think someone that's got a briefcase and is a lawyer would be getting ice cream on her nails. But she loves them."

If you were to ask about Yayo's extra-long and embellished nails, Freeman's sleek and shiny acrylics, or Warner's set of nails with what looks like tiny murals on each pointed tip, the women would be glad to tell you about them. But whether or not the nails are real isn't what makes them special to the women — and shouldn't be what makes them special to you. Each set of carefully shaped nails is reflective of exactly who the women were in the moment they got them, how they were feeling, what they wanted to show the world that week. But beyond that, the only fact about the nails that should matter at all is one: They love them.