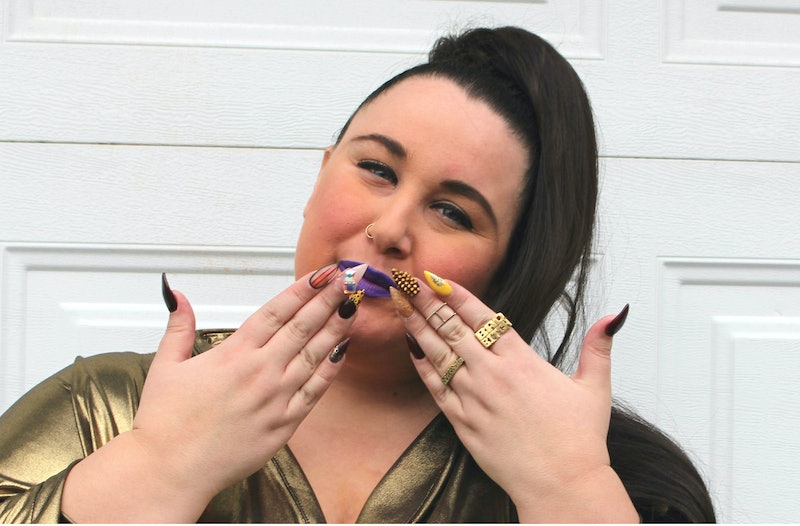 As someone who has been wearing fake nails for a few years, it can be pretty frustrating to constantly explain to folks who don't wear them why wearing acrylic nails (even long ones!) isn't, like, a major life challenge. To some, it might be a choice for vanity (totally legit). To me, it's a matter of self expression and artistic freedom.

I love my long stiletto nails, but I really don't love answering the question, "How do you function?" First of all, I think it's an insulting inquiry. I even got a free meal once when a waitress wouldn't stop harassing me about my nails and a manager overheard me discussing my discomfort with her incessant line of questioning.

As much as I hate the conversations, I also kind of get it. To an outsider, long nails may seem like an unnecessary or vapid challenge. But if there's one thing that I have learned both from my own experiences and through talking to others, it's that wearing nails is like anything else. You just adapt and get used to it.

Considering I have a few hacks that I have learned to make wearing nails a breeze, I knew I couldn't be the only one. I asked my friends and followers via social media to see what tricks they employ for making acrylic nails easier to wear while going about their day-to-day, and here's what they had to say.

1. Use Your Knuckles To Put In Hair Product

Mik of the blog CuzMikkiSaidSo told me that her hacks come into play when she is applying hair products. She says that when she uses gel, for example, she bends her finger and uses her knuckle to scoop the product out of the jar, so that it ends up on her finger and not stuck under her nail. Genius!

2. And To Tuck Your Sheets In

Blogger and model Dana of Who's That Girl Dana tells me that she has been wearing acrylics since she was 13 years old, which is dedication to a look for sure. One hack she has developed over the years is tucking her fitted sheets under the bed using her knuckles, ensuring she never loses a nail in the process.

3. Use The Nails As Scoops

Model Megan Kimberling no longer has acrylic nails, but she has grown her natural ones pretty long. She tells me she has one trick that helps when she's applying lotion or any other cosmetic product in a tub. "I will flip my finger over to use the top of my nail as a scoop," she says. "If I use the pad of my finger, I get stuff under my nail and it's annoying. But if I use the top of my nail to scoop, then nothing gets under it."

4. Go Edward Scissorhands With Them

Aussie plus size blogger and model Rhiannon Hennessy says that she considers her nails more of a help than a hindrance. She tells me that she uses them when she's at work to poke through tape and open boxes. From applying lashes to opening foil lids on dip, her claws come in handy.

5. Keep Some Tweezers At The Ready

Fellow designer Arianna Jamerson says that she considers her nails useful. She uses them for deep conditioning her scalp, threading her sewing machine, braiding, and taking out her contacts. When she needs a little extra assistance, she tells me that tweezers always make things easier.

Model Alexa Danger says she doesn't consider herself a nail pro, but that she has found that her nails have made for the best personal scalp massager and even caused her boyfriend to ask for frequent back scratches. I have to agree that a stiletto nail back scratch can be very gratifying when you have a wicked itch.

7. Use The Pliers Trick

I remember the first time I tried inserting my credit card into a machine to pay for parking, only to find that my nails were too long to get it out and my card became stuck. I admittedly panicked, and luckily my friend was there to pull it out for me. I don't always have a shorter-nailed friend with me, though, and asking a stranger to pull out your debit card for you can be risky and awkward. So now I carry a pair of jewelry pliers in my purse and use those to insert and remove my card.

I'm a metalsmith, so I have plenty of jewelry pliers laying around. But I've heard of others using tweezers for the same purpose. Just make sure that you remove your pliers from your purse before you travel because from personal experience, I can tell you that they will get you stopped by airport security.

Zelmia tells me that she can no longer wear acrylic nails because of her job in woodworking. But when she did have them on, she used to keep a clip in her wallet so that she could grab her cards out. She said it was a tiny binder clip that she glued felt to, so that it wouldn't scratch the cards in the process. This is definitely a creative way to make things work.

9. Your Credit Cards Can Actually Help You

Speaking of cards, model Cherry D'Lish tells me that she often uses a card to open closed lids that her nails are too thick to tackle. The card comes in handy for opening things like eyeshadow palettes or the bottom part of her phone case. I know this struggle all too well.

One person I can always count on to have some pretty awesome nails is LaToya of the blog TheFatGirlofFashion. She says that she keeps a playing card with her so that she can use it to scoop things up.

I will add that trying to pick up coins with acrylics is no easy feat, so this trick is incredibly smart. She also tells me that when she has to use a keyboard repeatedly, she will use a pencil to hit the keys in order to prevent her nails from breaking.

One of the best acrylic maintenance tricks is just to be conscious that your nails are there. Toni tells me that she makes sure to always wear gloves when doing the dishes to prevent messing up her claws in any way, and that she avoids eating curry completely because it can stain the nails.

12. Use Gloves When Necessary

I have accidentally poked through things more times than I can count, and if there's one thing I definitely don't want to poke through, it's plus size tights — mostly because they are so often costly and one little poke can ruin an entire pair. A fellow blogger once recommended putting tights on while wearing gloves to dull the point of the nail, and my mind was immediately put at ease.

One acrylic nail hack is to simply grow your real nails out long enough and hone in on your shaping skills, so your actual nails look fake. That's what Canadian blogger Ama Scriver has done, anyway. She says she considers herself passionate about her nails and that she's worked hard to perfect her own maintenance routine so that she doesn't have to wear acrylics to achieve the look she desires. She uses cuticle oil regularly and is super careful not to break them. Scriver says she finds it both amazing and hilarious how often she gets asked if her nails are fake.

As with any part of your beauty routine, you just have to learn what works for you. What anyone else has to say about your nails (or any other part of your body) is really not their business. With that in mind, get ready to claw your way through life unapologetically.

More like this
42 Black Owned Fashion & Beauty Brands To Support Today & Always
By Mekita Rivas, Shea Simmons, Kui Mwai and Dominique Norman
Aura Nails Are The Coolest Mani Trend RN
By Jordan Murray
Beetles Gel Polish Is The Secret To At-Home Manicures That Last
By Olivia Rose Ferreiro
Most Comfortable Underwear For Big Butts
By Audrey Williams
Get Even More From Bustle — Sign Up For The Newsletter