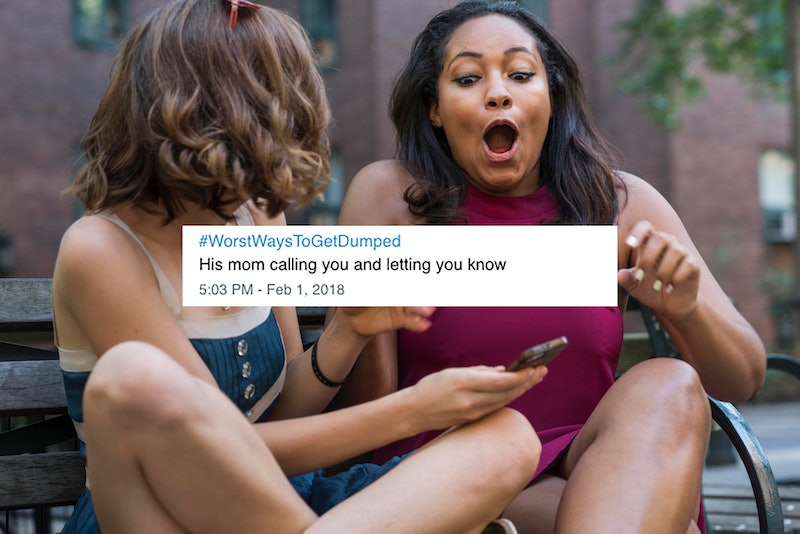 All breakups are not created equal: there's the cordial kind of farewell, and then there's the gut-wrenching, heart-shattering, awkward AF breakup that makes everybody cringe. Today, Twitter users are weighing in on the latter kind with the trending hashtag #WorstWaysToGetDumped.

As far as pop culture breakups go, the infamous Sex and the City Post-it note debacle reigns supreme as one of the worst ways to get broken up with. Unfortunately, the primacy of the digital realm has supplanted Post-its with even worse ways to get dumped, from texts to G-chats to DMs to breadcrumbing to straight-up ghosting. Letting down someone easy in a nice crowded restaurant seems to be a thing of the past — which it should be, because that is also terrible. Can you give a person in mourning some privacy, please?

Still, there are equally awkward ways to get dumped IRL that remain popular, like telling your significant other it's over during the holidays, when you're all hanging out with friends, or mid-romantic getaway (which is definitely a breakup that the Bachelor-franchise capitalizes on). Which is worse? It's all in the eye of the dumped beholder.

Here are just few of the terrible ways to be broken up with by someone you love:

3. During A Sexy Moment

4. By Someone Other Than Your Partner

6. In A Public Place

Although none of these breakups methods are very savory, we can all take comfort in the fact that no matter how awkward or painful you've had it, you're definitely not alone.