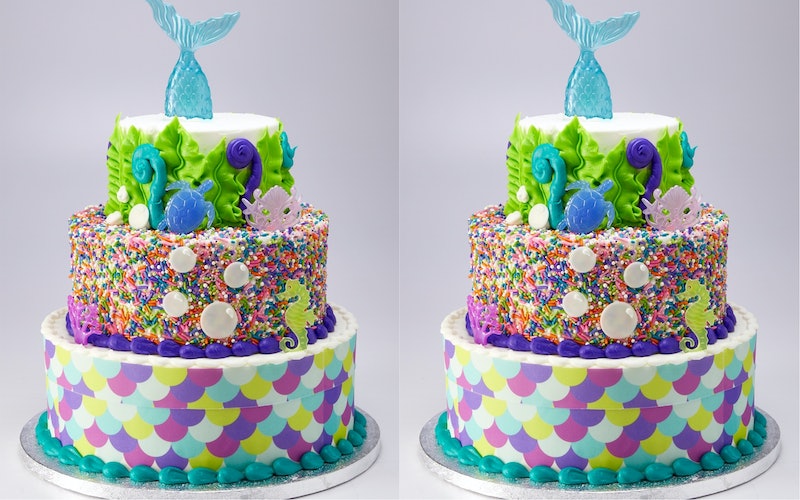 Courtesy of Sam's Club/Remixed by Bustle

People love outrageous food. The more colorful and unique the snack, the better it is. Log on to any social media platform and with a few short clicks you will discover a plethora of fairytale-quality cakes. Though to actually buy one of these cakes, often you need to visit a boutique specialty bakery. But thanks to a certain grocery store chain, you can have your cake and eat it, too. Sam's Club just introduced a 3-tier mermaid cake starting on July 20, perfect for your next summer shindig.

The Mermaid Cake is nothing short of a masterpiece. In fact, it resembles something that belongs in a museum far more than something to be eaten after dinner. The bottom tier is covered in a pattern of blue, green, and purple scales, reminiscent of a mermaid tail. The second layer is absolutely covered in rainbow sprinkles. Like, TOTALLY plastered in them. Consider the sprinkles you find on the typical ice cream cone a drizzling; this tier of cake was hit with a sprinkle blizzard. The top tier is outfitted in beautiful, precisely piped frosting decorations that look like algae, kelp, and other miscellaneous aquatic flora. Each tier has a piped border at its base that provides an extra layer of definition to the final product. Plastic seahorses and bubbles are affixed throughout, and a large, translucent, aqua-colored mermaid tail completes the edible underwater utopia.

The cake is available in either chocolate or vanilla. Sam's Club gives customers the option of two different sizes, as well, with a standard, three-tiered version, or a smaller, two-tiered version (for which the entire middle tier is removed). The former serves 46 and sells for $36.98, while the latter serves 66 and sells for $68.98. For both, that comes out to around a dollar per serving, which is an unbelievably low price to pay for a piece of such a magnificent sugary monstrosity.

This is not the first time Sam's Club has released a fantastical dessert. In fact, the mermaid cake is in some ways a follow-up to its unicorn cake released last spring.

Sam's Club Unicorn Cake is similar to its mermaid counterpart in a number of ways. Aside from being sold for the same price, both have three tiers and look like something out of a childhood dream (or child-at-heart). The base layer of Sam's Club's Unicorn Cake is decorated with a rainbow of pastel horizontal stripes. The middle tier is, like the mermaid cake, completely coated in florescent-colored sprinkles; no bubbles here, though. The top tier depicts golden unicorn eyelashes, snoozing comfortably. The whole thing is finished off with unicorn ears, an airy, delicate wisp of blue and hot pink icing-hair, and a golden plastic horn. It too is available in either chocolate or vanilla.

Mermaids and unicorns have gone hand-in-hand for ages. It is about time someone — something, rather — gives people the opportunity to celebrate both. Don't restrict your next party to exclusively being themed for one fairytale creature. Both these cakes channel creatures who have been known to possess magical powers. A unicorn's blood provides immortality, if you ask the wizarding world, and mermaid's have been depicted in art and prose as being alluring, with beautiful singing voices. Both are perfect for capturing that summer ~vibe~.

As summer slowly slips away, use the remaining time to channel your inner magical being. Throw a pool party. Swim at night, and embrace the way the water glistens on your human skin. Just because you don't have scales doesn't mean you can't channel your inner siren.

The Mermaid Cake will be available at Sam's Club locations nationwide beginning July 20, and it's made-to-order — so call ahead and make your mer-dreams come true.