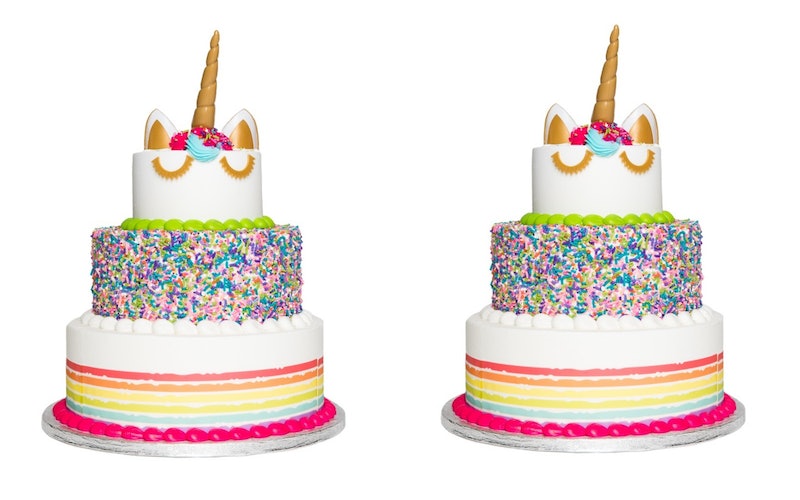 In the last few years, the millennial obsession with all things unicorn has, frankly, rivaled Voldemort's. While we're not on the prowl for mythical blood that will grant us immortality (well, most of us anyway), there is no doubt that the unicorn trend itself is becoming quite immortal — as recently as two weeks ago, the internet went so bonkers over a massive unicorn pool float that it may give the Instagrams still rolling in from last year's Unicorn Frappuccino a run for their money. Now, though, comes the true pièce de resistance: Sam's Club has a three tier unicorn cake, and it is a ridiculously adorable rainbow daydream come to life.

Full disclosure: I used to work in a wedding cake bakery, and by virtue of that I have had the exact cake that I want fully envisioned for a number of years — perhaps too many, considering the very little progress I have made in tricking Harry Styles into marriage. But all my plans just flew out the window at the sight of this cake — nay, maybe all of the plans I have made for my entire human existence. Truly, any excuse to party with this unicorn cake is excuse enough for me.

The bottom tier features vertical rainbow lines and adorable pink piping, the middle tier is coated in unicorn-esque sprinkles, and the top tier takes advantage of everyone's favorite Instagram trend, which is sleepy unicorn eyes on desserts. The top of the cake features a golden horn anchored with pink-sprinkled frosting, and two cute little ears that someone is definitely going to fight over for eating rights.

According to a Sam's Club spokesperson, the cake will be available in stores starting on April 1. The cakes are only available made-to-order, meaning you'll have to call in advance or head to a Sam's Club location to commission one. You can choose between chocolate and vanilla cake as your flavor options, but perhaps most importantly? This cake only costs $68.98, and it feeds approximately 66 people. That means you can throw a massive unicorn rave for the low, low price of $1 per person (assuming that you are the kind of person who throws unicorn raves; you clicked on this link, didn't you?).

And the time has, perhaps, never been more appropriate than right now, with National Unicorn Day coming up on April 9. It falls on a Monday this year, which means you can come in fresh from the weekend with your unicorn eyeliner, smelling of unicorn mist, and chugging your unicorn cereal straight from the box. LIVE YOUR BEST, SHINIEST LIVES, EVERYONE. And don't forget when you wrap up the day with your three-tier unicorn cake to wash it down with the Unicorn Magic ice cream that just hit Target; as the old adage goes, "You can never have too much glitter in your stomach." (Right?)

This is hardly Sam's Club's first rodeo when it comes to viral unicorn products; in fact, they are responsible for the aggressively Instagrammable unicorn pool float that went viral earlier this month. In case you missed it, these pool floats from Party Bird Island hold up to six people on them, measuring a massive ten by ten feet. Bonus: they also feature built-in coolers and cup holders, which I assume, in light of this cake news, will become cake plate holders instead.

Basically, if anyone needs me this summer, catch me out on the Hudson captaining one of these unicorn floats with a massive three-tier unicorn cake wedged between my hands. Life is too short not to live it to the most unicorn-filled and magical extreme.