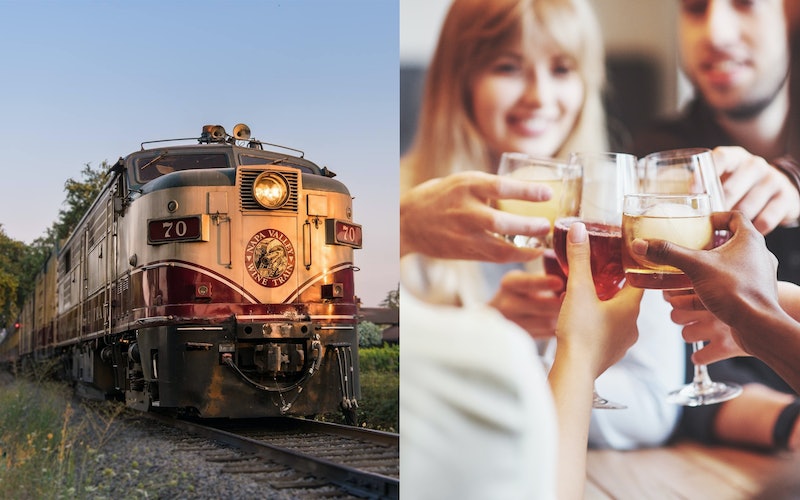 Interactive dinner theatre — particularly interactive murder mystery dinner theatre — has been a mainstay of popular culture for decades, but this fall, you’ll have your chance to experience it like you never have before: The Napa Valley Wine Train’s ‘80s-themed murder mystery dinner will be wending its way through California Wine Country on Sept. 26. Mounted in honor of the Napa Valley Wine Train’s 30th anniversary, the Totally ‘80s Totally Murder event, as it’s called, has… a lot going on. It’s not just a wine train. It’s not just a murder mystery dinner. And it’s not just an ‘80s-themed party. It is all of these things at once, complete with an elaborate, multi-course meal served aboard a vintage train.

I believe the phrase “Here For It” is what I’m looking for right now.

That’s when the route started to shrink. Southern Pacific stopped passenger service to Calistoga in 1929; then, as freight service declined throughout the 20th century, the line beyond St. Helena was abandoned, as well. But in 1987, the newly-formed company Napa Valley Wine Train, Inc. purchased what had once been the Napa Valley Railroad, and, well… clearly it all worked out for everyone. The Napa Valley Wine Train took its first passenger trip on Sept. 16, 1989, and it’s been running ever since.

These days, the Napa Valley Wine Train's route runs between Downtown Napa and St. Helena, passing 33 different wineries and vineyards, including big names like Beringer and Robert Mondavi, as it goes. The cars are vintage; built in 1915, they were once the first-class coaches for the Northern Pacific Railway’s fanciest trains and have been beautifully restored to the height of luxury. And many of the journeys the train takes are themed; indeed, murder mystery dinner theatre trips created in conjunction with the Murder Mystery Company — a nationwide theatre company which specializes in interactive dinner theatre — are actually a somewhat common occurrence.

What makes this murder mystery dinner trip special is the fact that it’s celebrating the Napa Valley Wine Train’s 30th birthday — and, as such, it’s an ‘80s murder mystery dinner theatre trip. The regular murder mystery wine train journey is set in the 1920s, giving it a Prohibition-era feel replete with bobbed hair, flapper dresses, and fedoras; the Totally ‘80s Totally Murder wine train journey, however, is set in 1989 — the year of the Napa Valley Wine Train’s inaugural journey — and therefore welcomes your best big hair, neon, and acid wash denim looks as you attempt to figure out what exactly went wrong at rock superstar “Poison Ratenstein’s” big concert. (Yes, really. That is the setup. Have fun, kids.)

The whole experience is just shy of three hours long, although the actual train trip portion of it only occupies about two hours of that time. Check-in begins at 6:15 p.m.; boarding starts at 6:30; and the show begins at 6:45. The train then leaves the station at 7 p.m. and returns at 9 p.m. — hopefully with the murderer revealed and getting their comeuppance. The journey also includes a four-course gourmet meal in addition to the murder and mayhem, though (it is dinner theatre, after all); menu highlights include prawn cocktail as the starter, a mixed green salad with goodies like goat cheese and toasted pecans, filet of beef as the main, and chocolate molten lava cake with raspberry coulis for dessert. Yum.

The one downside is that the Napa Valley Wine Train’s murder mysteries tend to sell out pretty quickly; indeed, the Totally ‘80s Totally Murder event may already be full up. But even if you miss this one, murder mystery dinner trips occur throughout the year — so as long as you don’t mind taking the regular 1920s-themed trip instead of the ‘80s one, you’ve still got a few options. Dates remaining for 2019 (besides Sept. 26, that is) include Oct. 5, Oct. 18, and Nov. 2.

Find out more at the Napa Valley Wine Train’s website. Now if you’ll excuse me, I have some Aqua Net to go dig up…