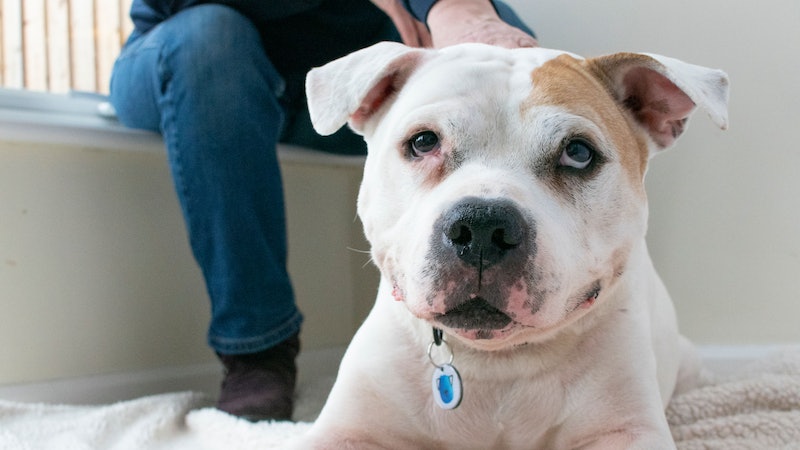 And now for a story that will leave you in floods of tears. Any tale involving an animal that needs a new home is heart-wrenching, but this one, although record-breaking, is particularly sad. Today, seven-year-old mongrel Aidan will have spent 600 days at Battersea Dogs & Cats Home; the longest amount of time that any animal currently in the centre's care has spent there.

In October 2017, Aidan was found wandering the streets of Woking alone. He found a home at Battersea's Old Windsor location, but this was only designed to be a temporary residence. Unfortunately, Aidan is still looking for a new owner.

“Aidan is such an affectionate, soppy boy who loves nothing more than a cuddle on the sofa under a fluffy blanket," Kaye Mughal, centre manager at Battersea Old Windsor, said in a statement sent to Bustle. "It’s heart-breaking that, while 3,714 of his doggy friends have found homes, he’s still waiting to find a family.”

Yes, you read that right. More than 3,700 canine pals have been rehomed during Aidan's time at Battersea. At 600 days, he has spent over 17 times longer than a typical dog would. The average period for a dog is 35 days versus 23 days for cats.

Although Aidan is in desperate need of a real home, he does have a few requirements. (What good boy doesn't?) He ideally needs an out-of-city home that has no other dogs or cats. He'd also prefer to live with teenagers, rather than young children.

Battersea has also noted that he can be extremely worried and insecure in new situations, so will need an owner who can help build his confidence. Potential families will also need to be okay with the fact that Aidan "loves the sound of his own voice, and becomes more vocal at times of stress or excitement." Apparently, this is a long-time habit, so don't expect to break it.

Aidan has found living in kennels particularly stressful, so is currently living in a foster home. There, he has learnt to be a little more independent. He can now be left alone for an hour or two and is beginning to "show his cheeky side."

"He's definitely a dog who knows what he likes and what he doesn't like — he’ll dig his heels in on walks sometimes!" writes Battersea, adding that Aidan likes to "keep himself to himself on walks" and will need to be kept on a lead around other dogs due to his anxieties.

As well as being insanely cute, Aidan comes with a bunch of other positives. Namely the fact that he can do several tricks. Battersea describes him as "a very clever dog", noting that the seven-year-old can sit, give both paws, and roll over. Plus, he "pulls a very comical wrinkly face when he is enjoying having his neck scratched."

Aidan already hit headlines in December 2018 when news that he would be spending his second Christmas at Battersea broke. I, and I'm sure many others, will be praying that he won't be spending a third one in the very same place.

If you or someone you know are interested in rehoming Aidan, contact Battersea Dog or register for rehoming here.