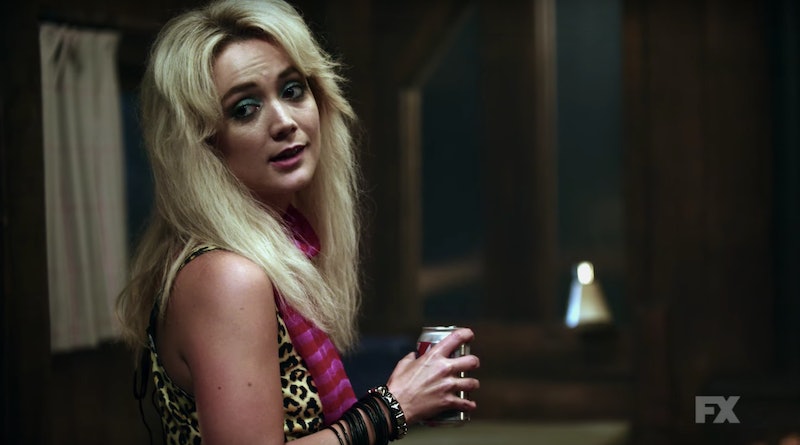 In the middle of American Horror Story Season 6, it was revealed that My Roanoke Nightmare was a fictional TV show within a show. Cameras cut, producers ran on screen, and the original main characters were revealed to be actors. If one early American Horror Story: 1984 theory proves true, showrunner Ryan Murphy may have used the same twist again.

According to the theory — posted on Twitter by user @buterasnapped — Brooke and the rest of the Redwood gang may not actually be camp counselors, but actors in an '80s slasher film. This would mean Mr. Jingles isn't a real killer either; he's also an actor. "y'all i've read so many ahs theories and now i actually believe the first five episodes is the movie and the rest of the season is the characters filming the movie and being famous actors and a serial killer is after them. because the actors irl are filming in LA," wrote the user.

AHS: 1984 is only a handful of episodes into the season, but there's actually already a lot of evidence supporting this theory. For one, the plot thus far has shared a number of similarities with I Know What You Did Last Summer. Much like in the 1997 film, 1984's first episode features a group of young friends who pile into a vehicle and accidentally hit a creepy hitchhiker on their drive (in this case, while on their way to Camp Redwood). In I Know What You Did Last Summer, the characters assume their victim is dead and dispose of the body in a nearby lake. In 1984, the soon-to-be-camp-counselors bring him to Redwood to get him help, but he ends up dead.

If you watch the show and movie's trailers side-by-side, you'll notice that both groups end up stationed around a campfire, telling stories about an escaped serial killer. On his way to his victims, the I Know What You Did Last Summer fisherman killer dangles a hook from his sleeve. For 1984's Mr. Jingles, it's a set of clinking keys and a blade.

Further supporting the this-is-actually-a-movie theory is the fact that, as some Reddit users have noted, 1984's special effects have been noticeably low-budget. Namely, the Episode 2 scene in which Richard Ramirez (aka the Night Stalker) sliced open the hiker's stomach and his guts spilled out. If this really were a movie within a show, this could just be AHS paying homage to the '80s slasher films that inspired it, which would have had less high-tech effects. Also, upon first encountering the Night Stalker, the hiker said "you're not supposed to be here" and "wait, I don't die here," which certainly sounds like he's an actor telling another actor he's off-script. This would explain why he keeps coming back to life, too: he's not really dying, it's just fake blood and guts courtesy of the prop department.

Finally, Cosmopolitan writer Hannah Chambers pointed out the opening credits for 1984 look like they're playing on a vintage television, which could be a sneaky nod to the fact that what we're watching is a show/movie.

It seems odd that AHS would repeat a plot twist it's already used before, but maybe that's precisely why the writers chose it: it's not something we'd be expecting.

More like this
‘Squid Game’ Creator Hwang Dong-Hyuk Just Dropped A Major Season 2 Tease
By Brian Anthony Hernandez and Bustle Editors
Everything To Know About 'Evil' Season 4
By Meguire Hennes
'The Sandman’s Ending Is A Departure From Neil Gaiman’s Comic Book Series
By Kadin Burnett
Does 'Locke & Key’s Ending Mean There Could Be A Season 4?
By Sophia Moore
Get Even More From Bustle — Sign Up For The Newsletter

This article was originally published on Oct. 2, 2019