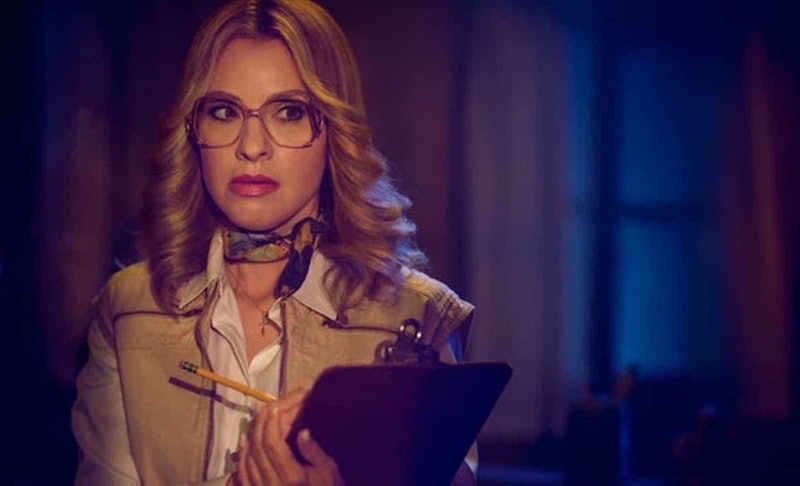 Spoilers ahead for Episode 2 of American Horror Story: 1984. True to its name, American Horror Story's Camp Redwood has already seen quite a bit of bloodshed. And while that's to be expected when you have two different serial killers skulking around, there may actually be a third villain hiding in plain sight. According to a new AHS: 1984 theory about Margaret, it could have been her, not Mr. Jingles, who killed all those campers in the 1970 massacre.

So far, viewers are divided about what would have driven Margaret to kill. Twitter user @Emz_2184 thinks she could have been seeking revenge for getting teased at camp for having an ear deformity, while user @Keep_it_franta thinks she went so far as to cut off her own ear to give more credibility to her story. However, those who ascribe to this theory can all agree on one thing: there's more to Margaret's story than she's letting on, and she's not as innocent as she claims to be.

Another thing fans are split on is whether Mr. Jingles is working with Margaret, or if he's just a scapegoat. Maybe the reason he's so obsessed with tracking her down is not because she was the "one who got away," but rather the person who ruined his life by framing him for murder. Keep in mind that the flashbacks viewers have been shown thus far are from Margaret's memories, which means they may not be reliable. However, it's worth noting that if that is the case, Mr. Jingles still isn't completely innocent: we've seen him kill a few people, so he's definitely capable of murder. What's unclear is if he began doing so on his own accord, or because his life was ruined and he's now returned for revenge.

Whatever the case, there's definitely something fishy about Margaret. For one, it's odd that she's so hellbent on re-opening the camp. Why would she want to revisit a place that supposedly caused her so much pain and trauma? She said she wants to replace the bad memories with happy ones, but then why did she seem so unbothered by the fact that Mr Jingles had escaped and could be targeting her, or the rest of the incoming campers, for that matter? Perhaps it's because she was the one who attacked everyone, and is now looking to have history repeat itself.

Another suspicious thing about Margaret is how curious she was to know what exactly her (dead) former campmate Jonas saw before he died. Was she worried he knew about her involvement in the whole thing? And then there's her conversation with the Night Stalker, which felt quite telling. "You know what’s great about God?" she told him. "You can use him to explain why something happened. But you can also use him to explain why you did something horrible. All you need to have the freedom to do what you want is two things: God and trauma.”

Margaret appears to have both of those things in her life, so it's only a matter of time before we find out what horrible thing she's covering up.