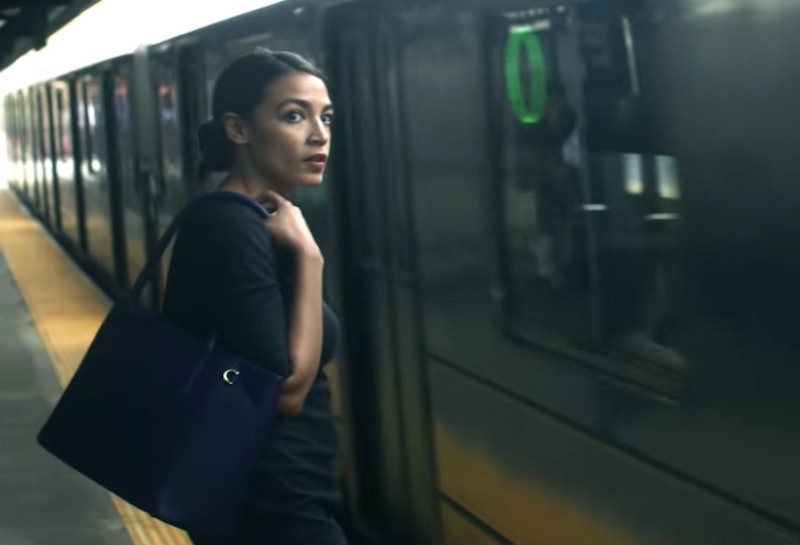 New York is now four months away from potentially electing the youngest woman to Congress ever. And she's a democratic socialist Latina from the Bronx who upset the fourth-ranking House Democrat in the primary. In a campaign video, Alexandria Ocasio-Cortez made one thing clear: "Women like me aren't supposed to run for office." But she did anyway — and won.

After that iconic first line, which is voiced over a video of her putting her hair into a ponytail, the video continues with more about what made her who she is today. "I wasn't born to a wealthy or powerful family. Mother from Puerto Rico, dad from the South Bronx. I was born in a place where your zip code determines your destiny," she says. "My name is Alexandria Ocasio-Cortez. I'm an educator, an organizer, a working class New Yorker."

The video was released last month, but now that Ocasio-Cortez is closer than ever to joining the House of Representatives, it's worth the watch. It outlines her background, her platform, and her thoughts on the future of the Democratic party.

"I've worked with expectant mothers. I've waited tables and led classrooms, and going into politics wasn't in the plan," Ocasio-Cortez says. "But after 20 years of the same representation, we have to ask, who has New York been changing for? Every day gets harder for working families like mine to get by. The rent gets higher, health care covers less, and our income stays the same."

It's clear that these changes haven't been for us, and we deserve a champion.

"It's time to fight for a New York that working families can afford," she says. "That's why I'm running for Congress. This race is about people vs. money. We've got people, they've got money."

And that's where she goes into her sell on why she thinks she's a better fit for New York than her primary opponent, Rep. Joseph Crowley, who has been in the House for 19 years. "It's time we acknowledge that not all Democrats are the same," she says, pointing out that Crowley had taken donations from corporations and alleging that he doesn't live in the district he represents. Crowley reportedly has homes in both Queens and Washington, D.C., where his children go to school.

Over scenes of Ocasio-Cortez in New York — riding the train, talking with families, walking on sidewalks — she lays out her platform of Medicare for all, tuition-free college, a federal jobs guarantee, and criminal justice reform.

"We can do it now," she says. "It doesn't take a hundred years to do this. It takes political courage. A New York for the many is possible. It's time for one of us."

Ocasio-Cortez would make history if she wins the general election. And it certainly seems like she will. According toThe New York Times, the 14th district, where she's running, is mostly Democrat. She has good odds against Republican Anthony Pappas, a St. John's University economics and finance professor.

After her win Tuesday night, she spoke to her supporters and told them it's not an "end" because of Crowley's loss but a "beginning."