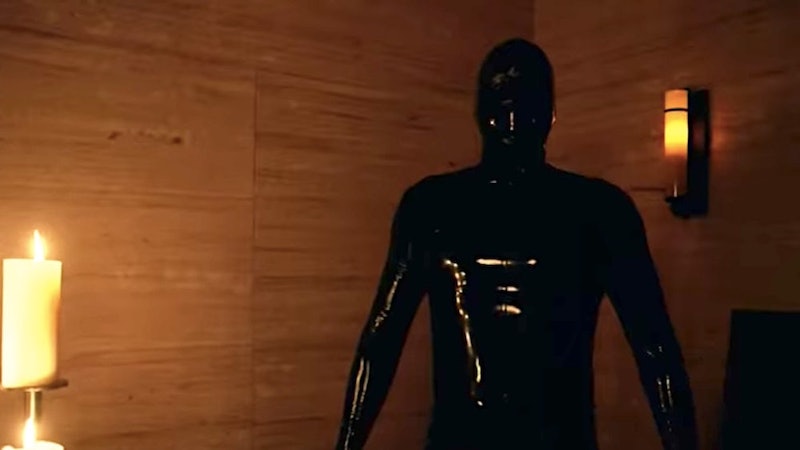 American Horror Story's original villain may being gearing up to make a comeback in a big way. On Sunday, April 26, series creator Ryan Murphy took to Instagram to reveal a possible clue about the upcoming season, suggesting that Murder House's Rubber Man will return for AHS Season 10 and don his infamous rubber suit for another reign of terror. The post itself is fairly cryptic and doesn't offer up any specifics of what exactly Murphy is trying to tell fans. It simply features a photo of Rubber Man alongside the caption, "Coming soon..."

Though he's never spoken a single word, this character has become an integral part of the AHS universe right from the very beginning. Evan Peters, Dylan McDermott, and Zachary Quinto all wore the suit in Murder House, while Cody Fern resurrected the outfit years later in Apocalypse. So who is it that could be hiding under this creepy ensemble for the upcoming installment? The mystery has yet to be revealed, though it is worth mentioning that Peters is slated to return for Season 10 after taking a hiatus from the series last year. Could his comeback include suiting up in this rubbery ensemble? Only time will tell...

However, speculation over the photo doesn't just end there. Murphy's post has also prompted some fans to speculate that Ariana Grande could be involved in the upcoming season. Fans who flocked to Murphy's Instagram page to see the Rubber Man noticed that the creator had followed Grande on the platform. Normally, this wouldn't be seen as that big of a deal — they did, after all, work together on Scream Queens a few years back. However, the only other person Murphy is currently following on the social media platform is his husband, David Miller. Why start following Grande at the same time he drops an AHS teaser unless he's trying to subtly tell us something — perhaps that she'll be the Rubber Man's latest victim or, even more intriguing, his latest iteration.

Then again, maybe it has nothing to do with AHS at all and everything to do with another Murphy-related project titled The Prom, which Grande was originally slated to be apart of. Unfortunately, due to scheduling conflicts, the singer was forced to drop out, but perhaps this is Murphy's way of hinting that she will be able to make an appearance after all. Or it all means absolutely nothing and Murphy is just messing with our minds for no reason, which seems par for the course at this point.

With the Season 10 theme still being kept under wraps, it's difficult to deduce much else about how Rubber Man could play a role in all of this, though, it does track with Murphy's promise that the new season will reunite several familiar faces. "It’s about reuniting fan-favorite actors to come back — because it might be our last season," Murphy told Deadline back in November 2019. And what better way to do just that than by bringing back the rubber-hooded figure that started it all?