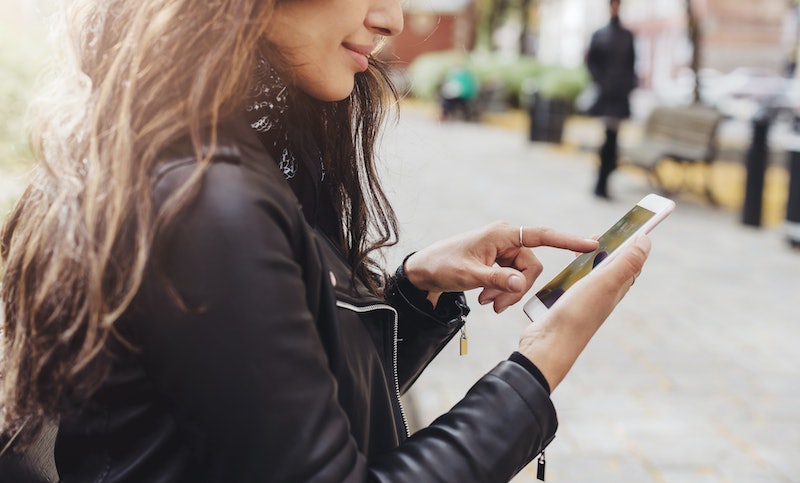 With the January blahs in full effect, and your motivation for your New Year's resolutions dwindling (because a whopping 92 percent of New Year's resolutions are broken), it can be hard to stay positive during the post-holiday slump. Springpop, a new app that gives users a positive place to explore their interests, can help keep your mind on the sunny side of the street this winter and beyond. (Since Blue Monday is Monday, Jan. 16, you might want to download this app now.)

Founded by Alex Pierson (an identical twin) while she was a student at the University of Pennsylvania (UPenn), the app supplies users with motivational quotes and positive articles each morning based on their interests, making it a great platform to help you develop a more positive mindset for the new year.

"I founded the app after seeing the negative effects of stress on [students'] mental health on campus," Alex tells Bustle in an email. "My goal with Springpop is to give people a bit of daily positivity and motivation."

With the daily onslaught of negative news hitting us from all sides, Springpop makes sure you start your day with a positive advantage.

"We provide five motivational articles and quotes at the top of the feed every morning so that our users can wake up to daily inspiration," Pierson says.

Follow up to 50 posters of the Springpop community at once, turn on your notifications and receive a daily does of curated, upbeat news each day. Community members can also become contributors, allowing them to post their own positive items (up to five day to to reduce newsfeed clutter) to empower others in one of the app's categories such as health, lifestyle, fitness, fashion, beauty, and business.

According to an article in The Huffington Post, Pierson's idea is on the mark because as little as just three minutes of negative news can make you 27 percent more likely to have a bad day. CBS News Journalist Michelle Gielan thought that statistic was troubling.

"I basically got tired of telling negative news stories,” Gielan explained to The Huffington Post in an interview with Senior Media Editor Gabriel Arana. “I wanted to see if there was a way to tell news stories, negative or positive, in a more effective way that would not only engage the public, but it would also create a long-term, quantifiable, sustainable positive change.”

Gielan enrolled at UPenn to study positive psychology and published her findings in a book, Broadcasting Happiness, that explores solutions-oriented storytelling, aka, “transformative journalism."

According to The Huffington Post article, people who watched or read transformative stories reported having a good day 88 percent of the time, which makes at least trying this method of news consumption totally worth it, because, who doesn't want to have a better day?