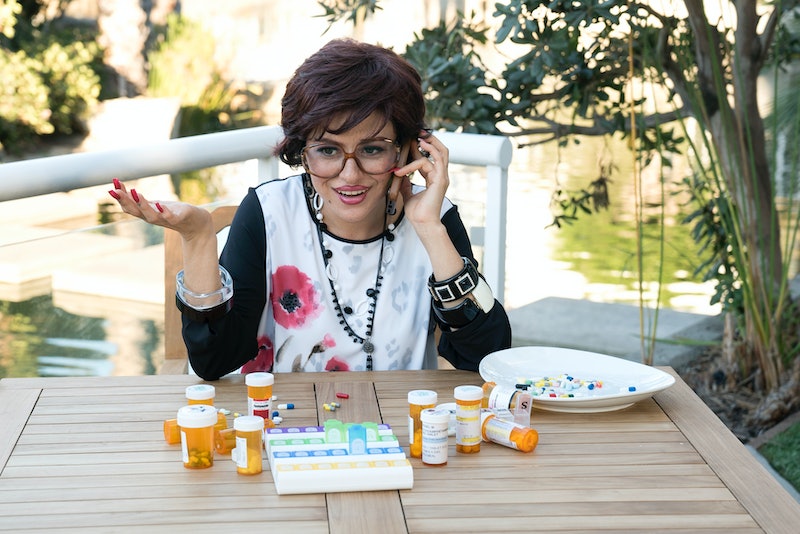 True to its name, Arrested Development has had a pretty stunted TV journey. It started out with three seasons at Fox before being canceled in 2006. Eight years later, Netflix revived it but changed the format, dedicating an episode to each individual character rather than letting things unfold ensemble-style. Afterward, the team released a Season 4 "remix" that re-cut the story into a unified narrative. And finally, Season 5 returned to a traditional format — except the season was split into two parts. Part 1 premiered on May 29, 2018, while Part 2 comes out March 15. But between all this back and forth, how much time has passed since the first half of the season, and all the bizarre antics that take place on this show anyway, you might be in need of an Arrested Development Season 5 Part 1 recap to help you understand what the heck is going on with the Bluths before diving into Part 2.

Part 1 picks up just after the events of Cinco de Quatro, and just about everyone is heading south of the border.

Michael tries to leave his family behind once and for all, running away in a satellite mapping car. He's caught, though, and taken back to California to work for the company that owned the car.

George-Michael and Maeby also head to Mexico in Lucille 2's car. George-Michael joins up with a group of exchange students from UC Irvine trying to immerse themselves in Mexican culture. Maeby joins a group of volunteers for a while, but eventually decides it's time to head back to California.

Soon, everyone packs up and goes home.

Lindsay decides to run for Stan Sitwell's former office, since she'd be running unopposed. Lucille fixes it so that the family will receive the Family of the Year Award in order to make Lindsay look good for her campaign. The award ceremony is supposed to take place at the frozen banana stand, although the frozen banana stand is still gone. That's not the only thing that goes wrong, however, and Lindsay ends up walking out after she realizes her mother doesn't really care about her.

Throughout the season, Tobias and his illegitimate son Murphy Brown practice dressing up and playing different members of the family, in case they need to stand in for them in public appearances. After Lindsay disappears, they go looking for Lindsay, but when they can't find her, Tobias recruits his ex-girlfriend DeBrie to pose as Lindsay's stand-in on the Bluths' Second of July parade float. DeBrie gets shy, however, hides under a sheet, and all the onlookers believe that it is Lindsay being anti-Muslim, and her chances of winning are shattered.

Gob becomes president of the Austero-Bluth company in Lucille 2's absence, which he is, of course, terrible at.

He tries to rekindle his romance with Tony Wonder, but at the Second of July Parade, just as he's about to confess his feelings to Tony, Tony winds up sealing himself into a cement case and Gob never gets the chance.

After her long-con from Season 4 of pretending to be a film studio exec went up in smoke, Maeby returns to her old tricks. Upon coming back from Mexico, she decides to serve as Lindsay's campaign manager and try to sabotage the campaign, but no matter what she does, it only seems to make Lindsay's followers like her more.

About half-way through the season, Maeby starts squatting in the abandoned retirement community apartment of Lucille 2. In order not to attract suspicion, she poses as an elderly woman nicknamed "Buttons." She feigns ignorance about technology, fends off the sexual advances of Stan Sitwell, and tearfully says goodbye to Fox & Friends when she finally moves out.

In Season 4, Michael and George-Michael started dating the same woman: Ron Howard's daughter, actor Rebel Ally. George-Michael punched his father in the face when he found out that Michael knew all along, and their relationship is super tense throughout Season 5 Part 1.

George-Michael also wants to break up with Rebel, and hasn't been seeing her very often. At Maeby's suggestion, he shows up at her house with a bag of sex toys, planning to offend her so that she'll break up with him. But it backfires, and she calls him the perfect boyfriend.

She invites him to a family barbecue, and he asks Maeby to dye his hair pink to make a bad impression. Of course, that also backfires: his hair turns out to be "Howard red," and everyone likes him even more.

Tobias suggests that Michael goes to visit his family's beach house, the place where his wife, Tracy, died of ovarian cancer. The family supposedly sold it after they died, which Michael says was one of the nicest things they ever did for him.

When he shows up at the house, though, Lucille answers the door. It turns out they never sold the house, and have been keeping it a secret from Michael for 20 years.

Lucille went there when Tobias broke her out of austerity, and has been carrying on an affair with her slightly younger neighbor.

Toward the end of the season, George-Michael finds a picture which he believes is of Oscar and Lucille 2 running away to Mexico. He shows the picture to district attorney Lottie Dottie as evidence that his family had nothing to do with Lucille 2's disappearance.

In reality, though, George-Michael and Maeby know that the picture is actually of them, meaning it would never hold up in court.

At the start of the season, Officer Toddler shows up at the Bluth family's penthouse trying to gather intel on the whereabouts of Lucille 2. She runs into Michael, who is being particularly suspicious.

Buster goes into hiding after Lucille goes missing, and Michael asks Toddler what he would need to do to declare someone a missing person. He tries to get his brother declared a missing person, but ultimately only succeeds in getting him arrested. Buster is let out on furlough to attend the Second of July Parade. He winds up running away from the parade with Oscar, which is going to prove a problem since he was supposed to be back in prison to serve the remaining week of his sentence.

Lucille Austero has been missing since Cinco de Quatro, although by the end of Season 5 Part 1, it turns out that Lucille Bluth actually knew where she was the whole time and sent her away on purpose so that she could use funds from the Bluth-Austero company to finance Lindsay's campaign.

So, much like Season 4, Part 1 ends with the Bluths taking a nonsensical made-up holiday and turning into even more nonsense and mayhem. And that is where Part 2 should pick up when it hits Netflix on Friday.