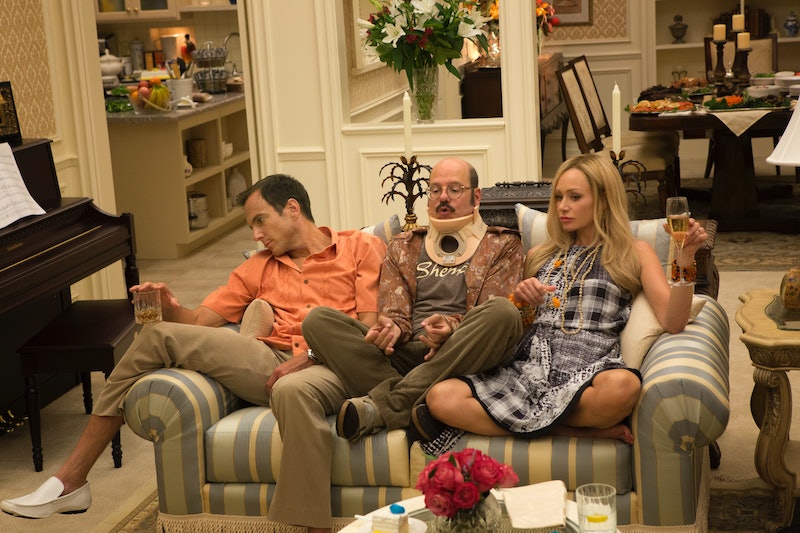 Season 4's timeline is convoluted, to say the least. Because of the cast's busy schedules ("logistics issues," according to The Hollywood Reporter), Arrested Development's fourth season originally focused on one character per episode, as opposed to the ensemble scenes of the previous three seasons. However, the 2018 "Fateful Consequences" remix, which stretched the original 15 episodes into 22 and included new voiceovers from Ron Howard, took those storylines and put them in chronological order. For that reason, the remix is much easier to follow, and while the re-cut wasn't really necessary, it was an unexpected blessing for many viewers. Still, as these episodes are premiering five years after Season 4 first aired, you may need a refresher on where we last left each member of the Bluth family.

More like this
'Shadow And Bone' Season 2 Pics Show Mal & Alina Starting A New Journey
By Bustle and Bustle UK
Everything To Know About 'Money Heist: Korea' Part 3
By Gretchen Smail
Jenna Ortega Was Worried About Her 'Wednesday' Love Triangle
By Grace Wehniainen
The 'Let The Right One In' Creator Says The Show “Requires” Several More Seasons
By Brad Witter
Get Even More From Bustle — Sign Up For The Newsletter