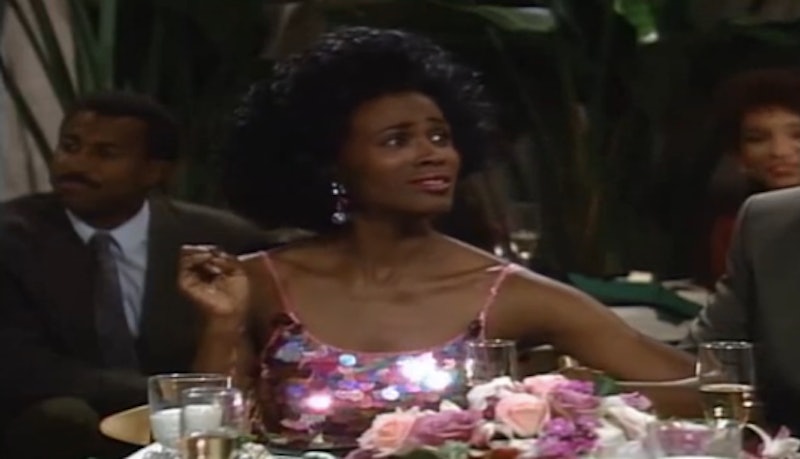 Every Fresh Prince fan knows about Aunt Viv's dance audition. In the years since the show went off the air, the clip has made its way to YouTube where anyone can relive Viv strolling into that class and dancing her butt off with a group of younger women. But, what you might not remember is the rest of the Fresh Prince of Bel-Air episode that scene comes from. And if you watch it now, it might make you feel about 1,000 years old.

The episode is titled "The Big Four-Oh" (Season 2, Episode 7), and it's all about Aunt Viv's 40th birthday. If you were a kid or teen in the '90s (or whenever you first watched Fresh Prince), the episode probably didn't seem that odd. Forty was pretty old, right? Well, looking back at it, Viv is treated as if turning 40 puts her one foot in the grave. Re-watching this episode involves both going, "What are they talking about? Forty's not old!" and confronting your mortality while evaluating the state of your joints.

There are a lot of jokes about turning 40 in the episode that are meant to be ridiculous, like the kids poking fun at Viv during the speech they give at her birthday party. Will says, "A lot of people make jokes about being 40, but we’re not living like that here, because 40 ain't old…. if you're a giant sequoia." Hillary adds, "After all, life begins at 40. Oops, did I say life? I meant gum disease." Naturally, there's also a birthday cake with so many candles that it sets off the smoke alarm and sprinklers.

But the entire episode isn't based on solely on jokes that 40 is old; it's based on the idea that 40 really is a turning point — which can be true. At the very beginning of the episode, Vivian examines herself in the mirror and notes, "That didn't use to be there!" Moments like that, when you feel like you're really noticing how your body is changing over time, seem both silly and real. The episode also confronts the idea that, at a certain age, there are a lot of people younger than you who see you as "old". It's quite the experience to re-watch the episode decades after it's debut and see it from a totally different perspective.

As the episode goes on, Vivian decides to return to dancing and is met with rude comments about her age from her classmates. When one says, "You haven't been to any classes", another adds, "Unless you count Lamaze." Dancing makes Viv's body hurt, but after she takes private lessons, she shows up at an audition and totally kills it. She decides, though, to stick to being a college professor, and not only because there's "not a part of [her] body that isn't aching for Bengay."

It's clear that Viv is going through a bit of a crisis and questioning what she did and didn't do with her life, which totally makes sense, but seeing the episode now just reinforces how the way we look at age changes as we ourselves get older. It also reinforces how much of a badass Aunt Viv is, especially when she tells off her classmates. "Is this advanced jazz?" she asks one who questions her arrival. "Then I'm in the right place."