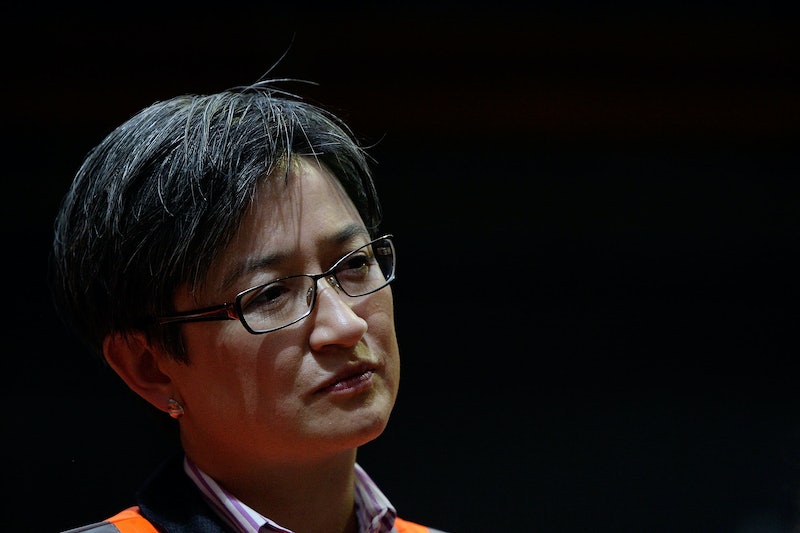 And today in How To Shut Down Manterrupting Like A Boss, we have this: Australian politician Penny Wong’s response to being interrupted repeatedly during a Senate meeting is everything. It is the perfect representation of everything I have ever wanted to be. I want to be Penny Wong when I grow up. (I realize that I am currently a 30-something woman and am therefore ostensibly already grown up… but the point still stands.)

That's Penny Wong up top; this is Ian Macdonald:

Macdonald is well known for his habit of interrupting others; it’s been reported on again and again. He also tends to be dismissive of those who call out his remarks as offensive. Indeed, the Sydney Morning Herald asked in October of 2016, “Ian Macdonald and Barry O’Sullivan: Are These Coalition Senators the Rudest Men in Australia?” (Barry O’Sullivan is also a Liberal National representative in the Senate for Queensland.)

It’s therefore perhaps unsurprising that during a Senate meeting on Wednesday, BuzzFeed reports, Macdonald repeatedly interrupted Wong while she was on the floor speaking. Wong, however, was having none of it. What appears to have happened directly prior to the zinger you’re about to hear Wong issue forth is that Macdonald was called out for interrupting Wong, to which Wong replied, “Thank you, Mr. President. …Senator Macdonald really does have an unhealthy obsession with me.” She continued, “But I digress. Coming back to the question at hand…” — at which point a comment coming from offscreen interrupted Wong yet again. The comment isn’t audible to folks watching the video, but judging from her response, Wong could clearly hear it — and her reply was gold: Without skipping a beat, she glanced over at the offscreen speaker and just said, “You’re not my type, either, mate, don’t worry about it.”

Wong is gay; she came out shortly after she became a Senator. She has two children with her partner, Sophie Allouache. So, when Wong says to a man that he’s not her type, she really means it. But as this Twitter user points out, her response would be applicable to any comment that might inspire it:

Now, bear in mind that there’s a lot we don’t know about the situation (I haven’t been able to find a full video of the session yet); we don’t know exactly who Wong was responding to with her “You’re not my type, either,” comment. It may have been Macdonald; however, it may not have been. Either way, though, it’s likely the comment was inappropriate — and boy, did Wong shut. It. Down.

For what it’s worth, I wouldn’t be surprised if the comment Wong was responding to did come from Macdonald, as the two politicians seem to have a rather adversarial relationship. The Sydney Morning Herald piece I mentioned earlier reported on Macdonald’s and O’Sullivan’s behavior during a Parliament estimates hearing towards professor and Human Rights Commission president Gillian Triggs, who was acting as a witness; when Macdonald repeatedly called Triggs “Senator,” rather than by her actual title of “Professor” because, he said, she was “ill-informed,” Wong stepped in, asking Macdonald to withdraw the remark. Macdonald refused to do so; he later said in response to the question of whether he was badgering the witness, “It’s typical of the left that when you’re trying to question somebody, they object at every opportunity.” Wong, meanwhile, said that she had “called it as she saw it,” according to the Sydney Morning Herald — she reportedly said that the reality is that Macdonald is a bully.

Regardless as to whether the interruption during this particular Senate meeting came from Macdonald or someone else, though, the bottom line is that the interruption itself is far from an uncommon occurrence.Indeed, study after study has confirmed that women are interrupted far more often than men are — and although women do interrupt other women (that is, when women are interrupted, it’s not just men who are doing the interrupting), men do tend to interrupt other people much more frequently than women do. Two studies published in 2014, for example, found that men interrupt other people twice as often as women do; what’s more, they’re almost three times as likely to interrupt women than they are to interrupt men. How Wong was treated on the Senate floor underlines what we already know: That, in our society, women are regularly viewed as less valuable than men, less deserve of time, of space, and often of respect.

But we can change that. In our culture, women are socialized not to make waves; if something someone does bothers us, we’re taught to keep quiet because saying something might upset the other person. We’re taught to put other people’s comfort over our own in virtually every situation. Wong’s response, however? That’s a reminder that we don’t have to do what society has taught us. We don’t have to shut up, and we don’t have to play nice if someone else is behaving poorly. We may not be experts at the sort of witty, cutting remarks that inspire in us the kind of admiration so many of us feel towards Penny Wong right now — but we don’t need to be witty in order to call out something unfair, unjust, or just plain rude.

Also, I’m definitely adopting “What Would Penny Wong Do?” as my new life motto. Just sayin’.