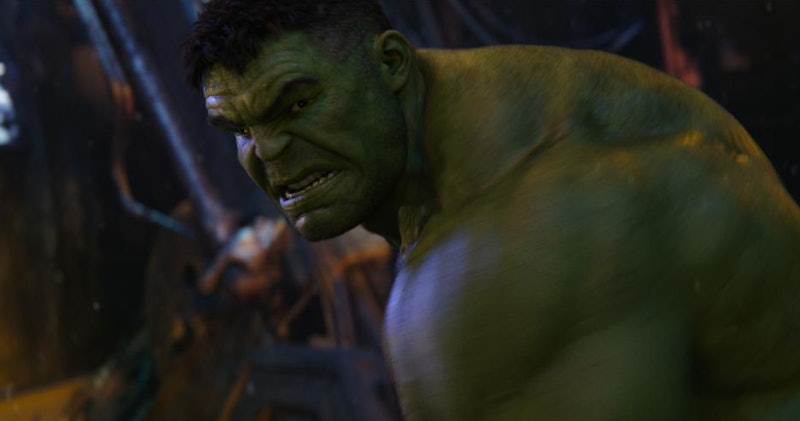 Spoilers ahead for Avengers: Infinity War. The latest movie in the MCU brings together all of our favorite superheroes, plus loads more from other Marvel films, and the resulting adventure features a whopping number of characters. But in a surprising turn of events, one of the oldest MCU characters, and an original Avengers member, isn't actually in the movie all that much. The Hulk has merely one scene in the opening moments of Infinity War and thereafter isn't seen again. Sure, Bruce Banner is in the movie a lot, but he's frequently unable to call forth the great green beast within him. And it seems indicative of a larger problem — can Hulk live without Bruce, and can Bruce survive without Hulk? And could that conflict mean that only Bruce or Hulk will survive Avengers 4?

The Hulk's only scene in Avengers: Infinity War happens in the first 10 minutes or so of the movie. After leaving a destroyed Asgard, Thor, Loki, Hulk, and the rest of the Asgardians are traveling to Earth. In a sequence reminiscent of the mid-credits scene after Thor: Ragnarok, the ship is intercepted by that of Thanos, and it's here where Bruce tries his hand at using Hulk to defeat the big, purple, Titan. But Hulk is no match for Thanos, and in a final act of desperation, Thor sends Hulk back to Earth via Heimdall's bifrost to warn the others. He lands in Doctor Strange's Sanctum Santorum as he transforms back into Bruce Banner, and that's the last we see of Hulk for the entire movie. No, he's not in that climactic battle scene on Wakanda, as shown in the Infinity War trailer; a nice work of trailer trickery, as it turns out.

There are moments throughout the movie when Bruce tries to get Hulk to appear, that giant battle at the end being one of them. But the big green guy refuses to emerge, at one point even shouting, "No!" when Bruce is yelling at him to come help the Avengers' cause. It's unclear whether Hulk is scared of Thanos after his defeat on the Asgardian ship, or if there's something else going on. Either way, Bruce's invocation of the Hulk is a departure from how the transformation was approached in previous movies. At first, in movies like The Incredible Hulk and The Avengers, Hulk came out on his own when Bruce got mad, out of the scientist's control. Recall during the Battle of New York how Bruce told Captain America, "That's my secret, Captain. I'm always angry."

There's always been an unclear method surrounding how Hulk appears. At first, it seemed like Hulk and Bruce acted independently of one another. In Avengers: Age of Ultron, Hulk needed Black Widow to calm him down and bring him out of Hulk mode. But when he flew away at the end, even Nat's pleas didn't have an effect on him, suggesting that Hulk doesn't have control over how long he stays, and when he transforms back to Bruce. This became a bigger issue in Thor: Ragnarok when Bruce discovered that he had been acting as Hulk for a whopping two years before a replay of Nat's message brought him whimpering back into Bruce. But even then, Bruce didn't realize for how long he had been gone, and was shocked at how long Hulk was able to remain in control of their shared body.

Hulk's domination of Banner during Ragnarok and his refusal to emerge during Infinity War suggests that their shared existence isn't going as harmoniously as planned, if it ever was supposed to be. But it is reflective of Marvel's plan for Bruce/Hulk to have a character arc without getting his own additional solo film. Though Ruffalo's Hulk has been embraced way more that Edward Norton's of the initial Hulk movie, there are no plans for Ruffalo to get his own standalone film as of yet. But, as Ruffalo told IGN in 2017, Ragnarok, Infinity War, and Avengers 4 are a trio of films that feature a definitive Hulk storyline. Said the actor,

"Kevin [Feige] brought me in and he said, 'What would you do if you could do a standalone Hulk movie?' I said, 'I think it should be this, this, this, and this, and it should end like this,'" Ruffalo recalled. "And he said, 'How about if we do that -- love that -- let's do that starting with Thor 3 and end in Avengers [4], and we'll use those three movies to basically do a standalone Hulk movie. How about that?' I was like, 'That sounds great.'"

As Ruffalo goes on to explain, the previously known rules no longer apply, and Hulk doesn't need be angry to appear anymore, which is what frightens Bruce so much. But could this also mean that only one of them is destined to survive in the end? Would the two turn on one another? It's possible that Hulk cannot survive without his host body, but if he's choosing to sit out the fight with Thanos, what use does Bruce have for him any longer? Can he "cure" himself of Hulk with some new research?

If Hulk can take over Bruce's body for years without his knowledge, that doesn't sound like something the Avenger would be willing to put up with. But is Hulk too strong for Bruce to battle? The idea that either Hulk or Bruce may not survive Avengers 4 is still just a theory, but the conflict between the two is definitely growing. No matter what happens, the end of this three-movie arc will be interesting to see play out, and it'll probably make some fans very angry.