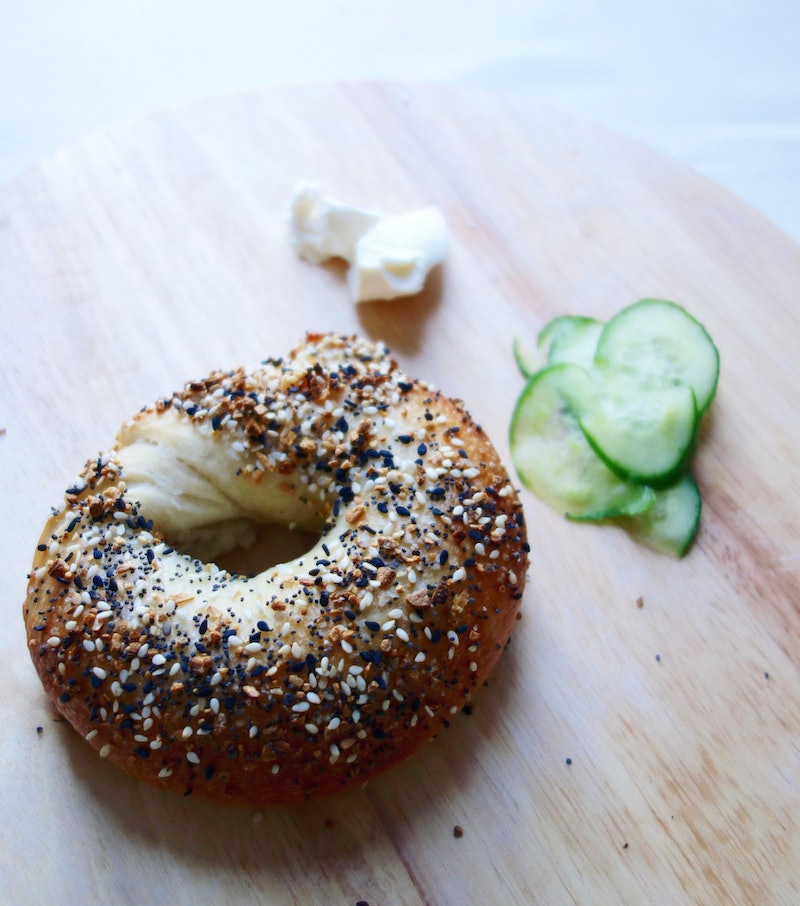 Joyous news from the kitchen: It's actually not that difficult to make a single bagel for yourself at home. You don't even need to be good at baking to achieve this bagel recipe for one person — all you need is your appetite, a few ingredients, and a lot of time. Of course, a lot of time doesn't mean you have to be shackled to the kitchen for the entirety of a day — the process of baking this breakfast favorite is not synonymous with a ball and chain. It just takes a few hours for the bagel dough to rise before it's ready to bake, but if you prepare the dough the night before you make your bagel, those hours will pass really quickly while you're sleeping.

You might be thinking, "but, Brittany, why would I make a bagel when I can just buy from the bakery next door?" I'd counter that baking for yourself counts as a meditation and self-care. Kneading dough for eight to 10 minutes helps rid you of stress that ails you just as well as an hour long guided ASMR meditation could, and that's because dough can act as an alternative sort of stress ball. Also, taking this time for yourself will result in ~achieving~ something: Namely, a satisfying and edible work of art that you can be so proud of, it makes it to your Instagram grid.

Baking a single bagel is a great way to acquaint yourself with the wonderful world of making bread at home. It's possible. It's fulfilling. It's a great way to continue the construction on your kitchen confidence. Why put on pants to leave the house for the been-sitting-here-for-a-while bakery bagel when you can enjoy a ~hot off the presses~ bagel of your own creation — at your leisure? Try making this classic bagel for one before ordering anything at the counter again. Wearing pants while doing so is optional.

For the poaching liquid

1. Stir the honey into the water. Combine the active dry yeast with the water and allow it to sit until it's frothy, about 10 minutes. If the yeast doesn't froth, it could be expired.

2. Combine the bread flour and the salt in a mixing bowl. Once the yeast has frothed, pour it into the flour and mix with a wooden spoon until a shaggy dough forms.

3. Turn the dough out onto a clean work surface and knead until it's smooth and tacky, about 10 minutes. It should not be sticky. You're kneading to develop and strengthen the gluten so that your bagel can get that classic ~texture~. Don't skimp on time. If you've kneaded the dough to perfection, it should slowly rise and fill back in when pressed with your finger.

4. Lightly oil another bowl for mixing. Place the dough in the bowl and cover with cling wrap until it rises, doubling in size, about one to one and a half hours (depending on your kitchen's environment). You want to make sure that the dough isn't resting in a drafty location. A warmer place, such as the top of your refrigerator, is a good location for your dough rise.

5. Turn the dough out onto a clean work surface and roll it into a log. Wrap the log around your fingers — thumb excluded — so that the two ends meet in the middle. Roll the two ends together on the work surface until they've morphed together. Make sure they're combined, or else the bagel will unravel when you poach it!

6. Once the bagel has been shaped, place it on a parchment paper lined baking sheet, cover with cling wrap, and place in the refrigerator for eight to 12 hours. It's a good idea to prepare the bagels before bed so that they can rise in the refrigerator overnight. (Just looking out for the logistics of your schedule!)

7. Ah, yes, baking day. On this glorious morning, pre-heat the oven to 450 degrees Fahrenheit, then remove the bagel from the refrigerator 30 minutes before you plan on poaching and baking it. Overnight, it should have puffed up.

9. It's time to conduct a little experiment called the "FLOAT TEST." Now, it's important that your bagel passes this one. (Don't worry, it will pass.) Fill a mixing bowl with water, then place the bagel in the bowl. It should rise to the surface in a matter of seconds. If the bagel floats, it's ready for baking. If it doesn't, allow the bagel to rest in the fridge for 10 minutes more before trying again.

10. Prepare your poaching bath. Fill a medium saucepan with water and season it with a pinch of salt — really, just a pinch is fine. Once the water comes to a boil, stir in the honey and baking soda. Poach the bagel on one side for 45 seconds to one minute. Using a slotted spoon, flip the bagel and poach the other side for 45 seconds more. Transfer the bagel back to the baking sheet.

11. If using any seeds to top the bagel, sprinkle them on now. As little or as much as you desire. You are the captain of your bagel fate now.

13. Allow the bagel to cool slightly before devouring it.

Now that is what I'd call perfection. *chef's kiss*