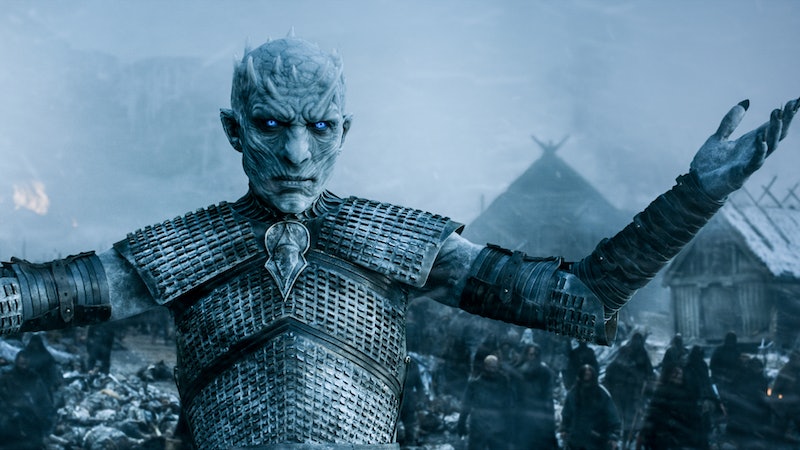 Game of Thrones has delivered some truly epic battle scenes over the course of the last seven seasons, but nothing compares to the anticipation surrounding the inevitable showdown between the living and the dead, which is set to take place next Sunday. Winterfell is about to be swarmed by an army of White Walkers and wights, but will they do it with or without their leader? Will the Night King be at the Battle of Winterfell? You'd think this would be an opportunity too good for him to miss, but one theory currently making its way around the internet suggests that he may have a much more strategic plan in mind.

The last we saw of the Night King was at the end of Season 7 when he was leading his army south of the now-crumbled Wall on the back of his brand new ice dragon, Viserion 2.0. Naturally, one would assume that he'd remain with his icy comrades and assist in their takedown of Winterfell. But what if that's not the case? What if, throughout the highly anticipated battle, the Night King is completely MIA? What would cause him to skip out on such a pivotal moment? Reddit user qp0n believes that the Night King plans to overtake King's Landing while the rest of his army takes on the North.

The theory points out that the Night King is a lot smarter than any of us are giving him credit for. He knows that two dragons are better than one, so it would be silly to risk his greatest asset at Winterfell, where Drogon and Rhaegal are currently residing. But if he took his ice dragon to King's Landing, the city's residents would be like sitting ducks and completely unprepared for his arrival. After all, Cersei figures she'll fight whichever side is left standing after the Winterfell battle. What better way to throw a wrench in her plans than by having the Night King land on her doorstep?

Additionally, qp0n goes on to say that this plot twist would also help to explain some of Bran's former visions that have yet to come to pass. Back in Season 4, Bran saw the throne room destroyed and a dragon shadow passing over King's Landing. At the time, it seemed to indicate Daenerys' inevitable return to Westeros, but the fact that it was only one dragon in the vision could indicate that it was Viserion under the Night King's control? We only see a shadow of the dragon, not the dragon itself (or its rider), so it's very possible.

The theory also goes on to remind fans of the visions Dany herself saw while visiting the House of the Undying back in Season 2. She walked into the King's Landing throne room, which was reduced to rubble and covered in snow and ash. Was this also a sign that the Night King would conquer the South instead of the North?

"Most people have come to assume that the living will lose The Battle of Winterfell and fall back to Moat Cailin," qp0n explained on Reddit. "I predict they actually win the battle... only to find out soon after that there is a new army of the dead much bigger and much further south... the population of King's Landing."

It has been mentioned before that King's Landing has a population of 1 million people. They'd be very useful for the Night King to have at his disposal. Not to mention it's sure to add fuel to the fire about Cersei becoming the Night Queen. The only flaw in this theory is the fact that Bran can see into the future, so wouldn't he already know the Night King's plan? Bran's about to serve as bait to lure the Night King out into the open in order to find him. So either Bran isn't able to get a clear read on the Night King's mind or he's purposefully lying for some reason and wants everyone to think the Night King will be there.

Either way, it's an interesting idea to mull over before next Sunday's episode. So if you don't see the Night King right away, at least now you have a sense of what he could be up to instead.