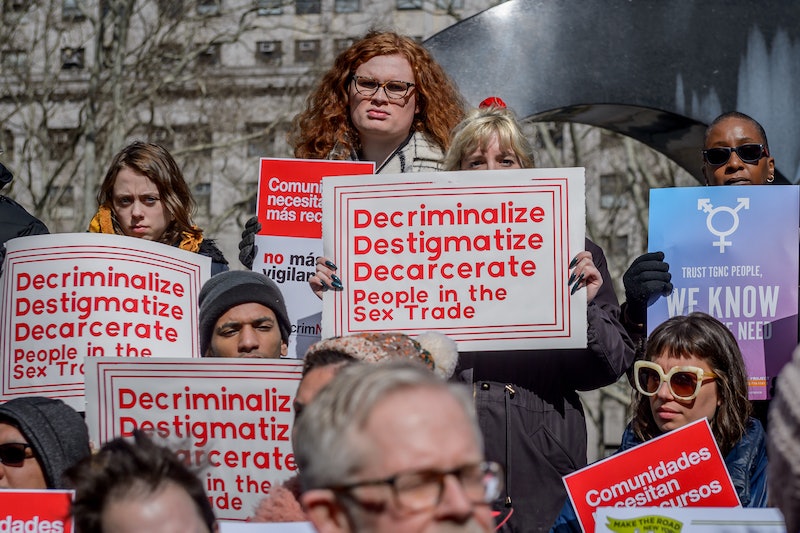 A group of activists and state legislators are fighting to make New York state a safer space for sex workers. A bill decriminalizing sex work was introduced in the state legislature on Monday, and advocates say it would make it easier and safer for those involved in the business to do their jobs. If passed, New York would be the first state to decriminalize sex work in the United States.

The bill — formally called the Stop Violence in the Sex Trades Act — is being championed by Decrim NY, a coalition of more than two dozen organizations fighting to decriminalize, decarcerate, and destigmatize the sex work industry in New York. Audacia Ray, who is the director of community organizing at the New York City Anti-Violence Project, a Decrim NY steering committee member, and a former sex worker, tells Bustle the bill is comprehensive.

"[The bill] looks at a lot of different ways that people are criminalized around prostitution code in New York State," Ray says. "And it's starting to dismantle that to be able to support workers to have rights and to be free from violence."

The bill would repeal sections of New York law that both criminalize buying and selling sex among consenting adults. Laws banning human trafficking, rape, sexual harassment, as well as the solicitation of sex from a minor will all remain on the books, Decrim NY says in a press release.

In keeping with Decrim NY's core goals, the bill would also provide a chance for sex workers and human trafficking survivors to request criminal record relief if they were convicted of a crime that the bill ultimately repeals. Ray says this is particularly important because having a criminal record makes it harder for current and former sex workers to find new jobs, and also, she says, opens them up for harassment.

"If we want people to have the full breadth of economic options, they need to have their records cleared," she says.

It's unclear when the bill will actually be debated and/or voted on, since the state's current legislative session ends next week. That being said, the initiative is currently supported by a swath of state legislators, per a Decrim NY press release.

Sex work decriminalization has also been popping up in the conversation around the 2020 Democratic presidential nomination. Back in February, Decrim NY released a statement calling on all presidential candidates to advocate for sex workers' rights, in order to promote their "safety, wellbeing, and health."

Momentum for the New York bill stemmed in part from last year's FOSTA/SESTA law package, Ray says. Signed into federal law last year, FOSTA/SESTA makes web publishers accountable for users who use their sites to advertise sex work. Opponents of the law argue that such rules effectively scare publishers into cracking down on posts that look like advertisements for sex work, whether or not they actually are. While the lawmakers who supported FOSTA/SESTA framed it as a way to combat human trafficking, opponents say the bill makes it harder for sex workers to screen potential clients, forcing them to take their work to the streets.

The New York decriminalization bill would not repeal FOSTA/SESTA, but it could ease some of the dangers associated with how the industry functions in New York. Ray believes that's where a lot of the energy behind the bill is coming from.

"I think it's really this upfall response to FOSTA/SESTA," Ray says. "And to, you know, to the overall political climate. Folks are really rising up and want to be able to protect our communities."