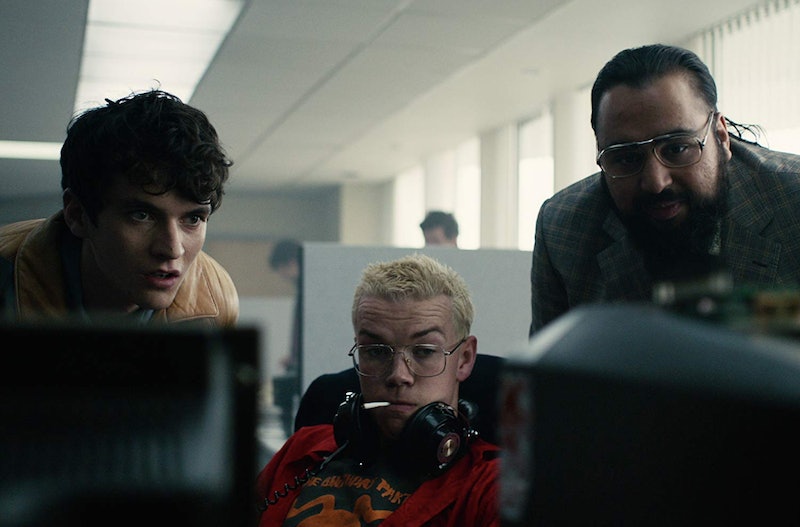 The fifth season of Black Mirror hasn't arrived yet, but in the meantime, Netflix gave fans the next best thing: Bandersnatch. This stand-alone episode is quickly becoming one of the most talked-about outings to date, and it's also riddled with tons of Easter eggs for fans of the show. Now Twitter user @zoeyduatch has posited a theory that Bandersnatch and Black Mirror's "White Bear" are connected.

Spoilers for all of Black Mirror ahead. On Twitter, @zoeyduatch points out that the "White Bear" symbol is the same one that appears in Bandersnatch, and that Stefan's experience might just be a punishment for his actions — although, what he could be being punished for is up for debate. The tweet reads:

"Me realizing the sign that appeared in white bear probably appears in bandersnatch multiple time because bandersnatch is stefan's punishment but this time we are the crowd seeing his torture as entertainment... goodbye i'm logging out and never coming back"

The theory was then shared on Reddit, where others elaborated further on their own perspectives, particularly why creator Charlie Brooker would bring the "White Bear" narrative back. Reddit user ratbastid wrote: "This is a standard Charlie Brooker move. Watching "White Bear," it becomes nauseatingly clear that the "watchers," running around filming the torture porn, are meant to be us. He implicates the viewer in the horror every chance he gets. This is the same story he told all last season, with the endless parade of cookie torture. We're button pushing our devices for entertainment, unconcerned with what it means in terms of human interactions. In this case, he literally embedded our button pushing as part of the narrative."

But a user named Anim4L53 noted that in "White Bear," the symbol was shown everywhere to Victoria (Lenora Crichlow) because her fiancé had a tattoo of it. It was meant to jog her memory of the horrific crime she committed with him, where they killed and tortured a little girl. And, according to them, it would hold no purpose in Stefan's world unless he was actually involved in the "White Bear" crime. But another Redditor, Circle45, said there's still a way the symbol could hold a deeper meaning without being directly tied to those crimes.

"I feel like they have gone further in time than White Bear, maybe not as far as Black Museum, and have created a franchise of punishment systems for different criminals based on the original white bear one, Stefan being another criminal they punish this way," they wrote in the thread. "It has become the justice park's symbol for delinquency and revenge, I think."

They also note that there are plenty of other similarities between Victoria and Stefan, showing that there might be more to the theory. "The way he wakes up is also similar to the way Victoria Skillane wakes up in White Bear. The gasps and the pills are the same in both episodes. No one ever questions how he is also able to just wake up and reset what was done the day before while remembering snippets of information he collected," they explained.

The theory actually makes perfect sense, considering Black Mirror often contains cross-references in episodes. But if this theory is correct, that means that viewers play a larger, meta role in the story than they thought, becoming Stefan's torturers despite trying so hard to give him a happy ending.