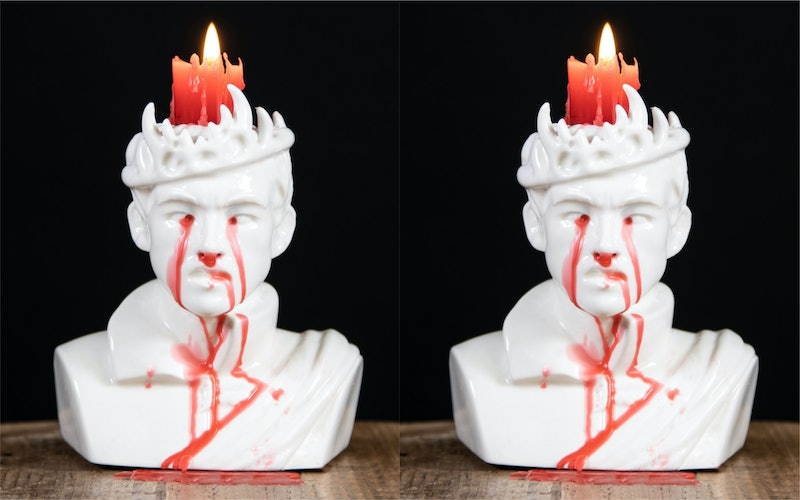 Choosing a candle isn't easy work — considering it will be burning in your space for hours, choosing the color, the shape, and the scent really is a commitment to a certain ~aesthetic~. But if you've had enough of Lavender Unicorn Woods and Mango Sea Salt Banana Hammock and the usual scents of yore, then you might want to consider this, uh, tasteful tribute to the Game of Thrones character you most love to hate: a bleeding Joffrey candle that leaks red hot wax of out its eyes and nose. (Cute!!)

The candle comes to your unsuspecting eyes by way of Firebox, which is selling the exclusive new product to "[c]elebrate the dramatic demise of a sneering little brat" and let you "[r]elive one of the most satisfying moments in Game of Thrones."

The white ceramic festering Joffrey comes complete with two red candles, plus a nose-picking tool so that you, the unrepentant monster of a human that you are, can unblock the wax from Joffrey's orifices, re-light your candle, and watch him choke on his blood all over again. Here's a lil preview of what it'll look like when you do.

"We can all look back fondly at the glorious moment he finally met his end. Those trembling bloodshot eyes, that frothing mouth, his snivelling purple face looking like it's about to pop. Never has something so traumatic elicited such a joyous reaction," Firebox says on its website. "It's arguably one of the most satisfying moments in the entire series. What a f*cking relief."

The candle retails for $26.99 on Firebox right now, which is truly a small price to pay to be able to usher your fellow Game of Thrones-watching guests into your home and display this on the coffee table while you watch the other 99% of the cast meet their similarly brutal ends. The hard truth is that no matter how many people Game of Thrones kills in this final season, none will be quite as cathartic as this was.

And since you will already be on Firebox's site, undoubtedly purchasing this candle for all your schadenfreuding needs immediately, the good news is that it has plenty of other ways to celebrate the last six episodes of Game of Thrones. For instance, when the show inevitably murders all of your faves, you will be able to numb the pain with Dragon Tears whiskey (which is a cinnamon whiskey that essentially is like, "Fireball, but make it geeky").

And if you have fallen so far into the depths of your GoT-related despair that the only way to crawl back out is by turning off the television and living in a world where they aren't all dead (yet), there is a Game of Thrones monopoly board here to help you live your lie.

Anyway, just remember no matter what happens in Game of Thrones, in some alternate fan fiction-fueled universe Sansa Stark is meditating in a room filled wall-to-wall with this bleeding Joffrey candles and living her fullest life, and that should bring comfort to us all.