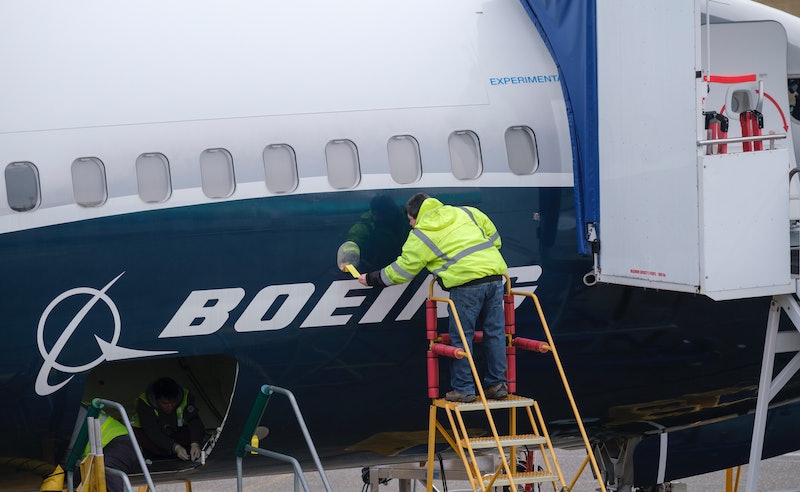 After the same plane model experienced two devastating crashes in five months, Boeing will update the 737 Max 8's safety features. The company has already announced that it will release improvements to its automated flight control system, known as the Maneuvering Characteristics Augmentation System (MCAS); but on Thursday, The New York Times reported that Boeing will also begin requiring a device that was missing from both of the crashed aircrafts.

The feature in question is called a "disagree light." Unlike some of Boeing's other safety devices, this one is not currently required on all 737 Max 8 crafts. The company charges extra for the light, and some cheaper airlines — including the Indonesian budget line Lion Air, which experienced the October crash — have opted to forgo it. Airlines such as Southwest, American, flydubai, and Canada's WestJet have paid to install the warning device.

The light can alert pilots to a potential problem with the MCAS system. "On every commercial airliner that's out there, a lot of the flying has gone on autopilot," aviation expert David Fill tells Bustle. For example, MCAS will automatically push an 737 MAX 8's nose downward if it believes that the plane is pointing dangerously high.

Some analysts suspect that the downed Boeing planes' angle of attack sensors malfunctioned and wrongly told the plane that it needed to adjust the nose down, The Times reported.

When a situation like this occurs, the pilot is "basically fighting the computer system," Fill says. Although the plane is dangerously veering toward the ground, "the computer system is still commanding the aircraft to dive or to descend."

Boeing's disagree light may help prevent these incidents. The light goes on when a plane's angle of attack sensors are conflicting, which could indicate that there's a malfunction and that MCAS is receiving inaccurate information.

Neither of the Boeing planes that went down had installed the light, and no 737 Max with the feature has experienced a crash, technologist Trevor Sumner noted on Twitter. Bustle has reached out to Boeing for comment.

The Lion Air and Ethiopian Airlines flights also lacked an angle of attack indicator that provides readings of the angle of attack sensors, according to The New York Times. This will continue to be an optional device. Many commentators are criticizing the fact that the company doesn't include its full range of safety features on every craft; Esquire's Charles Pierce called Boeing's system "a monument to corporate greed."

"There are so many things that should not be optional," aviation attorney Mark H. Goodrich told The Times. "Many airlines want the cheapest airplane you can get." The upgrades are often expensive, even though they can be cheap for Boeing to install, as in the case of the disagree light. Goodrich argued that the system is designed to help the company avoid culpability: "Boeing is able to say, 'Hey, it was available.'"

Every new 737 Max craft that is manufactured will now be required to have a disagree light, according to The New York Times. This may be a step toward better safety guarantees for airline customers.