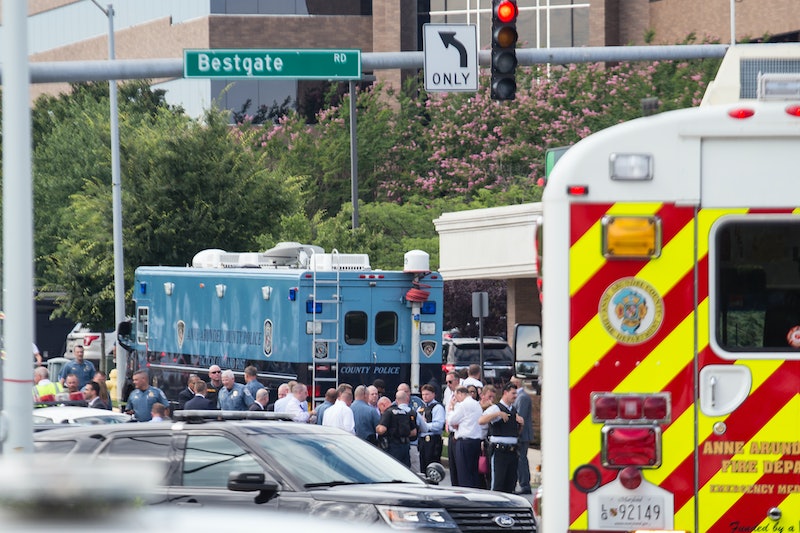 Annapolis officials confirmed that at least five people died in a shooting at the Capital Gazette newsroom in Maryland on Thursday. Although the investigation is still ongoing and little is known about what happened, a first-hand account of the Capital Gazette shooting from Phil Davis, one of the journalists at the newspaper, sheds some light on what unfolded on Thursday afternoon.

Davis, a Capital Gazette crime reporter, was in the building during the shooting. He recounted his harrowing experience first in several tweets and later in an interview with his Capital Gazette colleagues. He says that the gunman fired through the glass door to the office and shot several of his coworkers, and described hearing the shooter reload as he was hiding under his desk.

"Gunman shot through the glass door to the office and opened fire on multiple employees. Can’t say much more and don’t want to declare anyone dead, but it’s bad," Davis tweeted while waiting to be questioned by police. “There is nothing more terrifying than hearing multiple people get shot while you’re under your desk and then hear the gunman reload.”

In a subsequent interview with the Capital Gazette, Davis characterized the scene as "a war zone" and said it would be "hard to describe for a while."

“I’m a police reporter. I write about this stuff — not necessarily to this extent, but shootings and death — all the time," Davis told the Capital Gazette. "But as much as I’m going to try to articulate how traumatizing it is to be hiding under your desk, you don’t know until you’re there and you feel helpless.” He said that eventually the gunfire ceased, but added that "I don’t know why he stopped" shooting.

Little is known about the shooting at the Capital Gazette. Police have said that a white adult male suspect is in custody , and that they believe a long gun was used in the shooting. No motive has been reported.

Initially, Acting Chief of Anne Arundel County Police William Krampf said that five people were killed in the shooting. Later in the day, however, NBC News reporter Hans Nichols reported on Twitter that police at the scene said that number is "no longer accurate," although they didn't say if it's too high or too low.

ABC 7 reported that, in light of the Capital Gazette shooting, the New York City Police Department is moving its officers to the headquarters of major New York-based publications as a precautionary measure. The Anne Arundel Medical Center, which is near the Capital Gazette offices, said in a tweet that its campus has been placed on lockdown.

Lt. Ryan Frashure, a spokesman for the Anne Arundel County Police Department, said at a press conference that authorities arrived on the scene within 60 seconds of the shooting being reported. He added that law enforcement officers from Annapolis, Howard County and the Maryland State Police were all responding to the shooting. The Bureau of Alcohol, Firearms and Tobacco is also on the scene, according to a tweet from the agency.

At the same presser, Annapolis Mayor Gavin Buckley said that the shooting "could have been a lot worse" if law enforcement hadn't arrived as quickly as it did.

Trump tweeted after the shooting that he is sending his "thoughts and prayers" to the victims and their families.

"Prior to departing Wisconsin, I was briefed on the shooting at Capital Gazette in Annapolis, Maryland," Trump wrote. "My thoughts and prayers are with the victims and their families. Thank you to all of the First Responders who are currently on the scene."