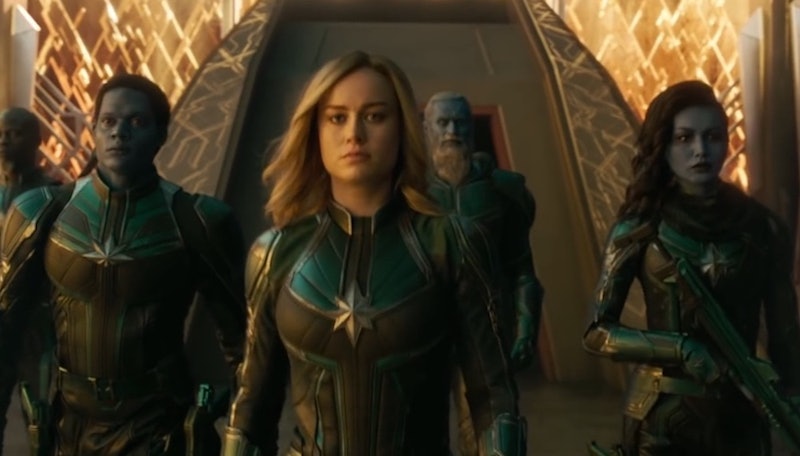 Sometimes an action-packed video speaks louder than words. Brie Larson shared the first Captain Marvel clip, and, in it, her titular half-Kree character (AKA Carol Danvers) is kicking some major Skrull butt. "I’ll just leave this here. #Captain Marvel," the actor tweeted, along with the video, in the early morning hours of Saturday, Feb. 2 (or late on Feb. 1, depending on your time zone). And she didn't disappoint. In just 45 seconds — most focusing on a fight atop a speeding train — the teaser was enough to get any Marvel Cinematic Universe fan's heart racing.

First thing's first, though: For those who aren't fluent in MCU language, actor Samuel L. Jackson's Nick Fury has you covered with the basics. "Skrulls are the bad guys, and you're a Kree, a race of noble warriors," he explained to Larson's Danvers in a previously released Captain Marvel trailer. ("Heroes. Noble warrior heroes," she interjected in the scene.)

Now that that's out of the way... Jackson's Agent Fury, along with Agent Coulson (played by Clark Gregg), actually also appears in the clip Larson posted, tailing the train where Captain Marvel is going toe to toe (or superpower to superpower) with the shape-shifting alien earth invader. Clad in her green Starforce uniform, the hero may struggle but still more than holds her own, even unleashing a double blast of energy at her foe. If this preview is any indication, When Captain Marvel hits theaters on March 8, moviegoers will undoubtedly be on the edge of their seats.

During a Feb. 1 appearance on The Ellen DeGeneres Show, Larson explained her "badass" Captain Marvel character. "She was an Air Force pilot and was breaking crazy records, and then this insane thing happens to her which gives her powers," she told DeGeneres. "And this film is about her learning about her past, figuring out who she is and owning herself, which is my favorite part."

As evidenced by the physicality shown in the Captain Marvel clip, Larson also shared the rigorous training she went through with fitness pro Jason Walsh to get superhero-level strong. (Fun fact: Walsh is also DeGeneres' trainer, though the daytime host joked she hasn't seen him in months.)

"This is like, a new thing. I was super not athletic. I was like a, "Can you open this water for me?" person," Larson said during the sit-down. "And then like a year ago I just ... got really beefy. I trained for 9 months and then was able to do crazy things. I could deadlift 225 pounds by the end of it."

What's more, Larson said that before training's end, she was even able to push Walsh's jeep uphill: “Captain Marvel can move planets, so I was like, I just want to be able to push your car. If I could push your jeep, then I’ll feel like I was ready. So it happened. There was a day where I did it."

As DeGeneres played a clip of Larson accomplishing said feat of strength, the actress noted that the vehicle also had "a full tank of gas" and "a person in it.”

Villains should definitely think twice before messing with Larson — both on and off screen.