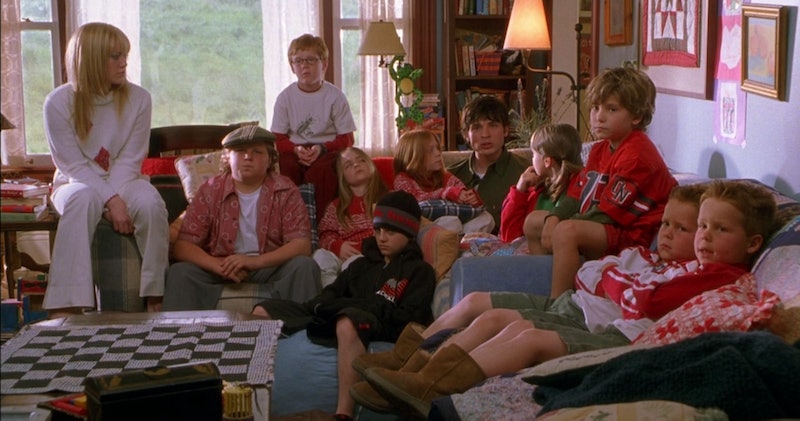 The Baker kids are back — well, most of them are. The Cheaper by the Dozen cast reunited and served up a much-needed dose of nostalgia all to raise money for charity. Actors from the 2003 family comedy, including Piper Perabo (Nora) and Hilary Duff (Lorraine) shared the reunion video on May 27. In it, the now-grown-up actors who played the Baker kids — Alyson Stoner (Sarah), twins Brent and Shane Kinsman (Nigel and Kyle), Blake Woodruff (Mike), Kevin G. Schmidt (Henry), Morgan York (Kim), Forrest Landis (Mark), and Jacob Smith (Jake) — recreated iconic scenes from the movie. Even Bonnie Hunt, who played mom Kate, got in on the fun.

The reunion was inspired by the "I'm Just a Kid" trend on TikTok, in which people recreate moments from their childhood — set to the song "I'm Just a Kid" by Simple Plan, of course. And as exciting as the reunion is, fans were quick to notice that not everyone from the remake was present. And there was one particular absence that really hurt: fan favorite Tom Welling, who played Charlie.

In his defense, Welling isn't the Baker family member missing. Steve Martin (dad Tom Baker) and Liliana Mumy (Jessica, another one of the Baker kids) are also absent in the video.

Fans are noticeably upset about the former Smallville star, with many wondering what he was up to in quarantine. Apparently, Charlie Baker was busy.

Apparently, Cheaper by the Dozen just isn't as important as the Arrowverse crossover, "Crisis on Infinite Earths."

It's unclear why Welling, Martin, and Mumy, didn't participate. But, despite them not joining their on-screen family, at least a lot of good is coming out of the reunion. Not only do fans get to see the cast reunite (and feel old in the process), but the actors are also trying to help raise money for No Kid Hungry.