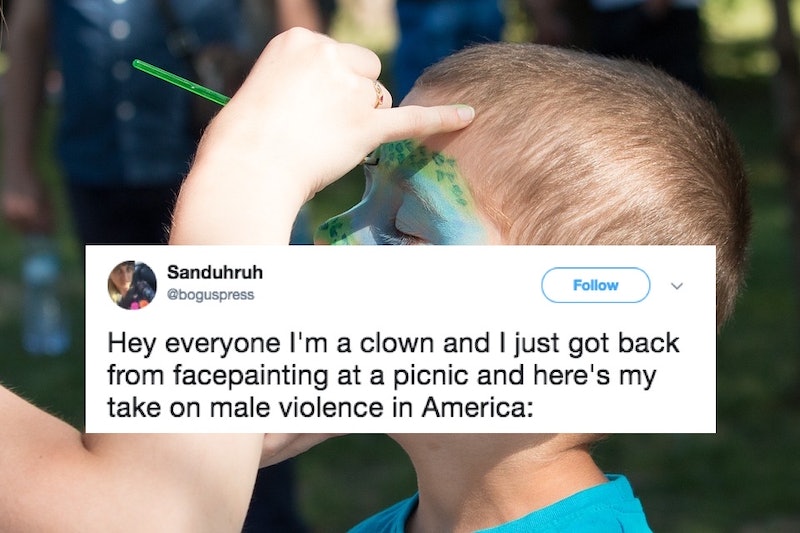 The patriarchy sucks. And not just in the way it polices women's sexuality, promotes rape culture, and continues to erases WOC's experiences. It also pushes men and women to continue the cycle of learned toxic masculinity. It means that from the time you're born, you're placed in a box based on your gender. And if you dare color outside of the lines, there are repercussions. Sometimes it's as blatant physical violence acted out against those who refuse to bend to gender roles; other times, it's as subtle and simple as a "no" from parents at a picnic when their son requests butterfly face paint from a clown.

When entertainer and Twitter user S.S Markarian, or @boguspress, addressed the idea of gender violence after the incident, it shows how even the small moments can have a greater impact. Just like Markarian points out, it's our inability to understand the toxic ways that we construct masculinity in childhood that leads to . Until we confront the unhealthy ways we enforce gender, there will be plenty of children who will become adults that continue that pattern as a result. And fragile masculinity will continue to promote the wrong conversations online as if we haven't already seen the ugly side to cyberbullying.

The story begins as a debrief after the picnic event mentioned, chronicling the reactions of parents whose son asked for a butterfly painted on his face.

And with the right preface, we get context about why this kind of conversation should continue on and off social media.

With stories like this, we understand how toxic masculinity takes root. The moments that children remember and shape their experience of the world for the rest of their lives.

The part that is both disturbing and moving about this moment is that both parents reinforce this problematic attitudes about gender.

But it gets even more troubling about how the parent responds even after saying "no." A solid everyday example of why masculinity is so fragile.

Instead of letting children decide how to express themselves, adults project their own ideas of what gender means.

To this user's credit, this seems like a non-confrontational way to intervene. But the gender roles be like...

What's frustrating is that while you understand what Markarian is doing and why, the insistence on gender norms sometimes makes a solid intervention look like intrusion — particularly when these ideas are already so rooted in the parents that they aren't likely to change their perspectives regardless.

While you can't help everyone see the error in their ways, it's just as important to recognize the subtle instances of aggression and calling it out the best you can. It gets frustrating, but it's stories like this that remind us exactly how the toxic narratives surrounding gender begin — early and repeatedly, and enforced by someone else.

More like this
25 Quotes About Love To Share During Pride Month 2022
By Madeleine Aggeler and Emma Garza
Is TikTok’s “Villain Era” Trend Just An Excuse For Bad Behaviour?
By Chanté Joseph
What The History Of Pride Month Means For Celebrations Today
By Jay Polish
TikTok's Favorite Bartender Thinks Mimosas & Bloody Marys Are Out For Brunch
By Alexis Morillo
Get Even More From Bustle — Sign Up For The Newsletter