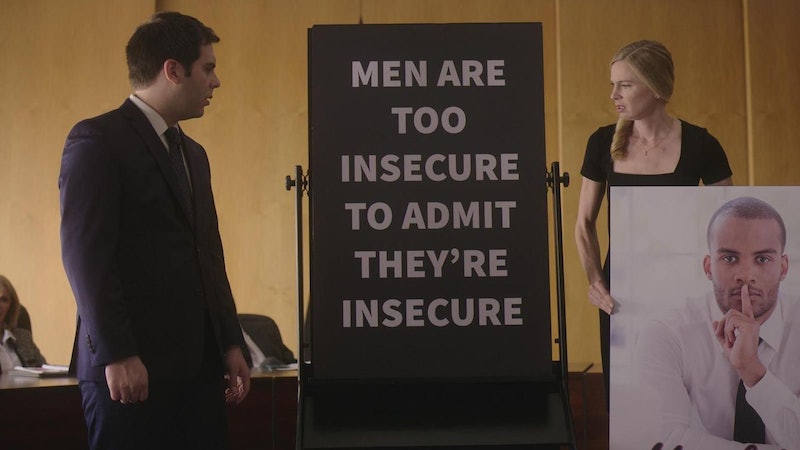 Coming from an all-male showrunner team, you wouldn't expect Comedy Central's Corporate, which brilliantly satirizes office culture, to deliver one of the sharpest takes on how women are often disadvantaged in the workplace. And yet this week the show takes on sexism in the workplace and beauty industry in a way that is so real that it hurts. It's a gut punch, but you'll laugh through it all.

The episode tackles all the injustices working women are dealt, from how the way they speak in an office setting can be unfairly judged, to how time consuming and expensive it is to sport a business casual look every morning, to how offices are always set to freezing temperatures to make men who wear suits and run hotter more comfortable, leaving women in skirts to shiver throughout the entire work day. (See an exclusive look at the episode below.)

It's refreshing to see a show created by men focus so clearly on the often unseen plight of working women, and Corporate creators and executive producers Matt Ingebretson, Jake Weisman, and Pat Bishop knew that in order to make this episode as real and relatable as possible, they needed to step back and let women tell the story.

"We've had female friends discuss with us tone policing and that happening to them, where the way they talk in the office is negative in some way," Ingebretson, who also stars in the series with Weisman, tells Bustle. "The writers in our writers room, a lot of them are women and they had a lot to say about what hell it is to be a woman in the office. We were really leaning on their expertise."

Sitting in Comedy Central's LA offices, Weisman is the first to admit that as "three dudes," they've had "seemingly way easier lives" than women, so they strived to have a gender-balanced writers room where women would be free to share their stories and input.

"It just allows you to learn things that didn't happen to you that are still going on for half the population," Weisman adds. "We just said, 'Please tell us what it's like. We have no idea.' [The women] in the writers room were able to tell us, 'This stuff is real. It sounds insane but it's real.'"

The biggest issue the showrunners wanted to skewer with Corporate's unapologetic and brutal honesty is how men are always criticizing women's tone of speaking in the office.

"We never want to be preachy or didactic, but with this episode, hopefully men can become more self-aware of what they might be inadvertently doing to women," Ingebretson says. "If the way women are talking to them is hitting them the wrong way, that might have more to do with them than it does with the woman who is talking to them. I've learned that specific thing just in the last few years when it happened to my girlfriend, and I wasn't aware of the extent of how crazy and alienating that makes you feel as a woman."

Weisman adds that their goal for this episode was to create empathy and understanding. "When you’re making an absurdist comedy, you're trying to be so ridiculous and so funny that it actually comes off as incredibly real, which ideally creates empathy," he says. "What we're trying to do is be as funny as possible while encouraging empathy. That's the only thing that will ever help anyone."

It's tricky line to walk to make the episode funny but empathetic, and credit goes to actor Anne Dudek for bringing each scene to life. Watching her get berated for her "aggressive and confrontational" tone when she's actually just speaking normally, only to then learn how to use her tone of voice to manipulate her male coworkers into getting what she wants will have you howling with laughter and screaming at the injustice of it at the same time. "In a way I wasn't asked to do anything untruthful or absurd," she says of bringing this episode to life. "I was asked to do something that is so typical and common."

"I hope men gain a better understanding of the hoops that women jump through constantly to try and be effective in this world."

Dudek has faced many situations in her life like the one her onscreen character Kate is forced to deal with in this episode, so she's excited for people see her performance. "I hope men gain a better understanding of the hoops that women jump through constantly to try and be effective in this world," she says. "It's such a simple thing, and yet it's so pervasive."

And that goes hand-in-hand with the episode's storyline in which Corporate's fake corporation Hampton Deville realizes that there is more money to be made in the beauty industry. Women spend billions of dollars on makeup, so why not figure out a way to market male makeup and cash in on making men feel insecure about their appearance in the same way women are made to feel unworthy by pop culture and advertising?

"Makeup is so weird," Weisman says with a laugh. "Half the population is taught that if they don't paint their faces, then they're ghouls. That's bizarre! Our show can be pretty dark, so just the idea that you should capitalize on shame is just funny to us. We wanted to talk about it because we don't fully get why it's happening, but it is."

Throughout the episode, Ingebretson's character Matt is the guinea pig for the male makeup, and the more he wears it the more obsessed he is with using more and more until he's become enslaved to spending tons of money and time on wearing makeup every day. Having to go full glam for filming was "honestly wonderful" for the showrunner/actor.

"I have three sisters, so I've worn some makeup in my life, but being glammed out was a new experience and jaws dropped on set," Ingebretson says with a laugh. "People would not stop talking about it. On a number of nights I told the makeup artist to not take it off of me and I just went out like that and I turned a few heads."

"That's the funny thing, it's really crappy that half the population is forced to wear it, but man, do you look good sometimes!" Weisman interjects with a shrug.

"And I'm a dumb man talking about makeup but the conundrum of it is this is a trap, but also I do look better with makeup on!" Ingebretson finishes, shaking his head and smiling.

"And everyone on TV is wearing it!" Weisman adds. "If I tried to be on our show without makeup, corporate would stop me. Literally they would tell me, 'You gotta wear makeup.' Everyone on TV looks so much better than they actually look. I think the best things to talk about and write about are the things that don't have an answer, so we just wanted to make you think about this."

For Dudek, these are issues she's never not thinking about. "I really relate on a personal level to how I present myself as a woman. There's the aspect of makeup and looking really good that is fun and there's an aspect that is pathologically stressful," she says. "This episode does an amazing job of clearly articulating the conflicting demands upon women to be effective and intelligent and taken seriously and really hot, especially when it's hyper-focused in an environment where you're technically only supposed to be judged on your work performance. What we expect women to be is ridiculous and impossible and you can actually make a lot of money off of getting people to do something that's impossible."

While the issues explored in this episode of Corporate affect women in all aspects of their lives, not just at their jobs, telling these stories in an office setting showcases the importance of equality in the workplace.

"My hope is that the comedy that comes specifically from my character is pointing out how ridiculous it is and the everyday struggle. It's laser focused on the idea that in a corporation, ideally we're all just brains and capability, right? You're hired to do a job and your value should be in how well you do your job," Dudek says. "And yet we're human beings that come from a f*cked up history of what we find valuable in each other; specifically for women, it's what your physical appearance is. This episode really clearly highlights the comedy in how deeply entrenched women's value is tied to their appearance... and the fact that people make money off this ridiculousness and it's still happening today is the cherry on top."

So get ready to laugh (and maybe cry). Whether you relate to it or learn something from it, it's clear that everyone can get something out of this episode.