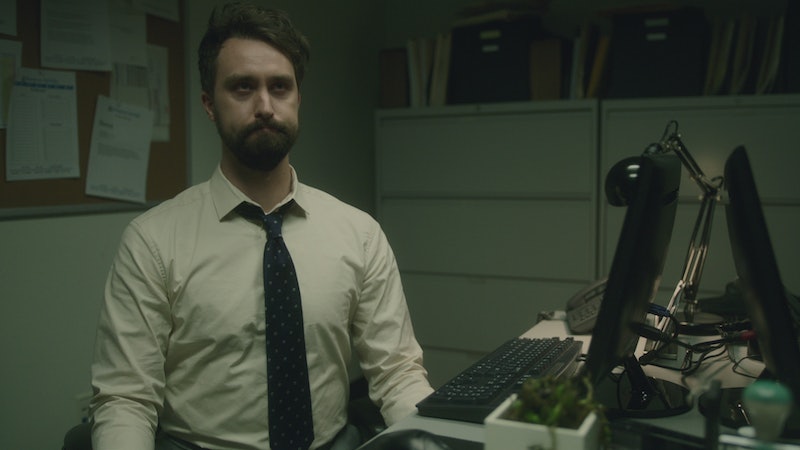 Despite the fact that I've never worked a meaningless job at a giant corporation, wearing a suit to work and sitting in a cubicle, I found myself relating to Comedy Central's new dark comedy Corporate (consulting producer: Amelie Gillette) in a way that I've never felt before while watching a TV show. The edgy series brilliantly and unapologetically skewers life in an office environment, whether you're a junior executive-in-training at a soulless multinational corporation like series stars and creators Matt Ingebretson and Jake Weisman (who named their characters after themselves), or a lowly intern at some nameless small company in anytown, USA.

Everyone will find something they've experienced in real life while working any kind of job in both the small throwaway moments and big plot lines on Corporate, and that's because, according to the creators and stars, the show is "more than just about corporate jobs."

"It's about jobs in general," Weisman tells Bustle while sitting down for lunch after his 2018 Winter Television Critics Association press tour panel just ended. "When you're young, you're promised that you can achieve your dreams, but your dream job, there are still parts of it that suck. [Corporate] is more about being an adult and how you deal with doing these soul-crushing things that come with that, that desperation you feel screaming into the void."

He then adds with a sharp laugh, "We think that's funny!"

To make Corporate feel brutally realistic, both Weisman and Ingebretson pulled from their real-life experiences working entry-level jobs. They also did a lot of research, and spoke to people who work at big-name corporations like Amazon and Google about what office culture is truly like, not for the top dogs who reap the rewards but rather for the people at the bottom of the totem pole.

"We found that sh*t flows downhill, people yell at the people below them," Weisman says. "Everyone is trying to survive and they're all terrified." But the new series manages to capture a feeling even greater than what just office workers feel. "Honestly, at its core, this show is about what it's like to be alive right now," Ingebretson adds. "It's crazy to be alive right now because the world is burning around us and yet we still have to show up looking nice and pretending that everything is fine and that this social media campaign matters."

He tugs at his work-appropriate blazer to accentuate his point. "It definitely doesn't," he says with laugh.

Of course, Corporate isn't the first dark comedy to skewer office culture. Office Space (casting: Nancy Klopper), the 1999 cult classic film from Mike Judge, satirized the life of cubicle dwellers fed up with their greedy boss to the point of fantasizing about what could be done to exact glorious revenge. But according to Ingebretson and Weisman, they didn't have Office Space in mind when creating Corporate.

Ingebretson adds that Corporate "digs into bigger societal issues and how those are tied into the day-to-day of working in an office," and acknowledges that their show is definitely "more brutal" than many other office comedies. Creator and director Pat Bishop, who is responsible for Corporate's bleak overarching tone and cinematic style, is shocked that more people haven't made shows or movies comparable to Office Space. "It's actually kind of surprising," he says with a laugh. "Or at least if we're ripping it off, then we're original in that we're the first people to rip it off."

Having worked eight jobs in the first three years after he first moved to L.A., Ingebretson had a treasure trove of his biggest office pet peeves to feature on Corporate. "A lot of this show's tone and feel came from my experiences and just this feeling of constantly being watched," he says. "I had this boss at this one company, I would be working in my cubicle and I would often just sense that someone was there and would look up and she was peering at me over the wall of my cubicle. That was the feeling I felt working at jobs like this, that I was being monitored and caged in. It was horrible."

For Weisman, it's small talk that is "the absolute worst."

"When someone asks me how I am, I reply, 'Not good!'" he says. "I'm ready to dig into it and the office environment is so dehumanized where someone asks you, 'How are you?' And you're supposed to go, 'Good, how are you?' 'Good, how was your weekend?' Every time you ask someone how their weekend was, you don't care. The fact that you have to talk to other human beings and pretend that you're friends, when there are actually laws in place that prohibit you actually being friends, that is a nightmare to me."

Even a simple human matter such as going to the bathroom in an office is fair game for Corporate. "I always hated working at jobs like this because there would always be somebody in a cubicle near the restroom in the office that you had to pass constantly," Ingebretson says. "So this guy just knows my entire life right now, way too much information about me."

And everyone knows that feeling of second-guessing the use of punctuation in emails. "I hate how you have to use exclamation points in emails in a way that never feels natural," Ingebretson says. "Because when someone uses 'thanks' in an email and puts a period at the end of it, it feels like an attack. You're forced into this fake optimism just for the sake of it."

The fact that you have to talk to other human beings and pretend that you're friends, when there are actually laws in place that prohibit you actually being friends, that is a nightmare to me.

Aside from stars Ingebretson and Weisman, the other cast members of Corporate were well-prepared to take on office culture despite being working actors in Hollywood. Lance Reddick, who plays Hampton Deville's tyrannical CEO Christian DeVille, worked at a public defender's office in Baltimore when he was 19, which taught him all the ins, outs and headaches of working within the bureaucracy of the justice system. Adam Lustick, who plays one of Christian's top lieutenants at Hampton Deville, has "been fired from basically every job [he] had."

"I worked at a grocery store, was fired pretty quickly. I worked for a catering company in New York and was fired twice," Lustick says with a laugh. "Really the only job I had that I was ever good at was a singing telegram, so I do know what it's like to be humiliated at work."

Anne Dudek, who plays Christian's other go-to sycophant Kate, had to put up with her fair share of overreaching bosses in the past. "The boundary of what you have to put up with is crazy just because you're being paid," she says. "I had a boss once who decided that sugar was evil so there was no sugar available for anyone to eat all day so we would all perform better. This is my diet, are you really going to control that part of my life just because you're paying me? How far does that go?"

Lustick agrees, adding that "there is something so dehumanizing about tiny acts of micromanaging."

"It's almost like you're having psychological experiments run against you," he says of every day office culture. "You can't have any sense of individuality, it's squashed even when you try to just write a simple email. I can relate to that. It's so mind-numbing."

As for Aparna Nancherla, she brings an added layer to her already genius performance of overstressed HR rep Grace in that she hates "other people." That's her biggest office pet peeve. Just simply "other people." And honestly, I've never heard anything more relatable than that.