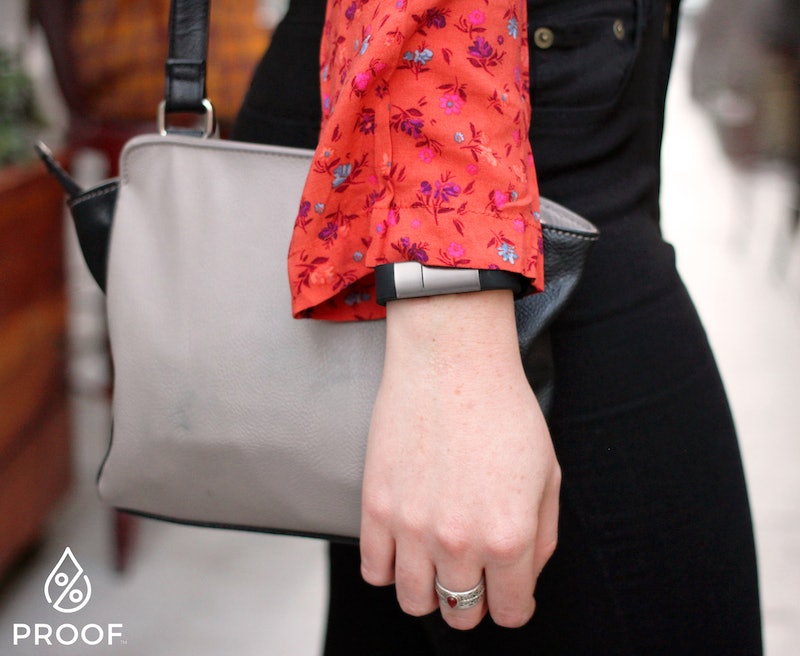 There are few things worse than waking up feeling hungover, and, as I (unfortunately) know all too well, we aren't always the best judges of when we've had too much to drink. How many times have you had "one more" when you know you're going to pay for it the next day? You might lie in bed in the morning after a rollicking night out bemoaning that last shot of the evening, or wishing you'd had had more to eat before drinking so much wine.

Obviously, the trick to feeling better in the morning is stopping the hangover before it starts, but just how do you do that? In the very near future, a new wearable technology called Proof will help stop you from getting too drunk. Think of it as your digital wing woman, like C-3PO for the modern gal.

While it isn't yet available for sale, you can sign up to get on the list to pre-order Proof. The technology, which touts itself as "the perfect pairing for any drink," looks like a FitBit and works by reading alcohol molecules and analyzing enzymes on the skin, but instead of alerting you when you've conquered your 10,000 steps, it let's you know when you should stop drinking alcohol and switch to water.

According to a recent article in Mashable, Proof not only tracks your current alcohol levels, the wristband and app work together to predict how drunk you'll be later in the night if you keep going. If that's not already cool enough, the technology can also predict when you'll be sober, and you can set it to alert you when you reach a specific blood alcohol level.

An invite-only friends feature allows friends and loved ones to track and monitor each other as well, kind of like a modern buddy system with a price tag of between $100-$150. Well worth it, I think.

The best thing about Proof is that it puts you in real control of your consumption without anyone else being the wiser. Checking our smartphones is an accepted social norm, as is wearing a FitBit, so no one will know that you're actually monitoring your alcohol intake and not tweeting or texting, giving you an edge and the reassurance that you won't be spending the next day hunched over the toilet.