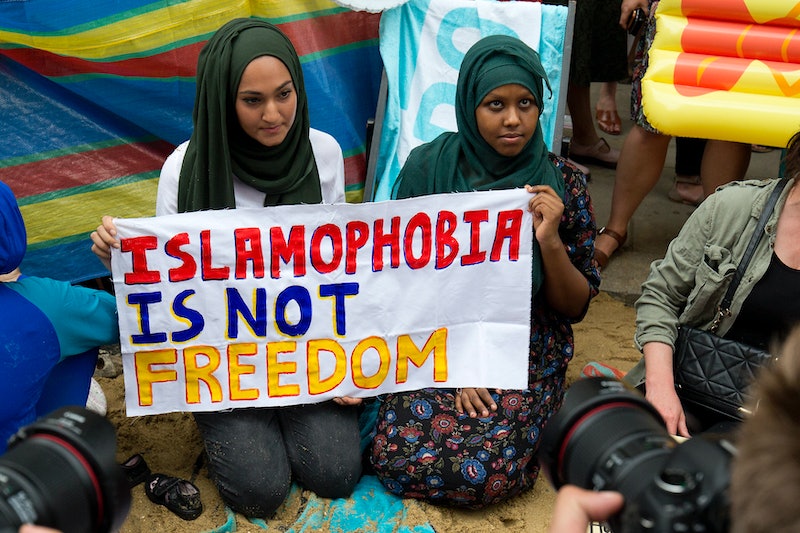 Because attacks on Muslims and people of Middle Eastern descent are on the rise throughout the western world, this "Counter Islamophobia Through Stories" initiative from KitaabWorld is just what we need right now. The diversity-in-publishing campaign wants to promote positive children's books written by and about Muslims. I've highlighted five of their choices below.

Islamophobia in the U.S. is worse today than it was on 9/11, aided in part by Donald Trump's anti-Muslim rhetoric, and further boosted by his election. In the U.K., the anti-Islamophobia watchdog group Tell MAMA reported a sharp uptick in anti-Muslim hate crimes in the days and weeks that followed the Brexit vote. Tell MAMA Chair Shahid Malik says "[t]he statistics paint a profoundly bleak picture of the explosion of anti-Muslim hate both online and on our streets, with visibly Muslim women being disproportionately targeted by cowardly hatemongers."

Founded by Gauri Manglik and Sadaf Siddiqui, the online bookstore KitaabWorld aims to promote "the discovery and distribution of South Asian children’s books, toys and games [sic]." The founders tell The Huffington Post that their Counter Islamophobia Through Stories campaign is designed "to get more books representing Muslim children in homes, schools and libraries," adding that, when kids read diverse books, they "do not feel any sense of 'weirdness' about other children who may not look like them, or eat or dress like them."

Counter Islamophobia Through Stories has four themes it plans to promote through curated book lists. They are:

1. Muslim kids as heroes: stories that have Muslims as main characters, as positive models, rather than villains.

3. An introduction to Islam: books that teach the positive aspects of the Islamic faith, and remove negative stereotypes and misinformation popular in the media.

4. Folktales from Islamic traditions: old favorites that are sure to delight readers of any culture.

So far, only the list of books with Muslim kids as heroes is live on KitaabWorld, but Manglik and Siddiqui have already selected 45 titles for their newest initiative. Until Feb. 28, shoppers can use the code "KITAABWORLD20" to get 20 percent off the purchase of these books.

Here are five you should consider buying for the kids in your life.

More like this
Ling Ma Is Back — This Time, With Yetis
By Kate Dwyer
Romance Authors Are Mobilizing For Reproductive Rights
By Natalia Perez-Gonzalez
What Is A "Hot Girl Book" & Why Is Everyone Talking About Them?
By Samantha Leach
10 Must-Read New Books Out This Week
By K.W. Colyard
Get Even More From Bustle — Sign Up For The Newsletter