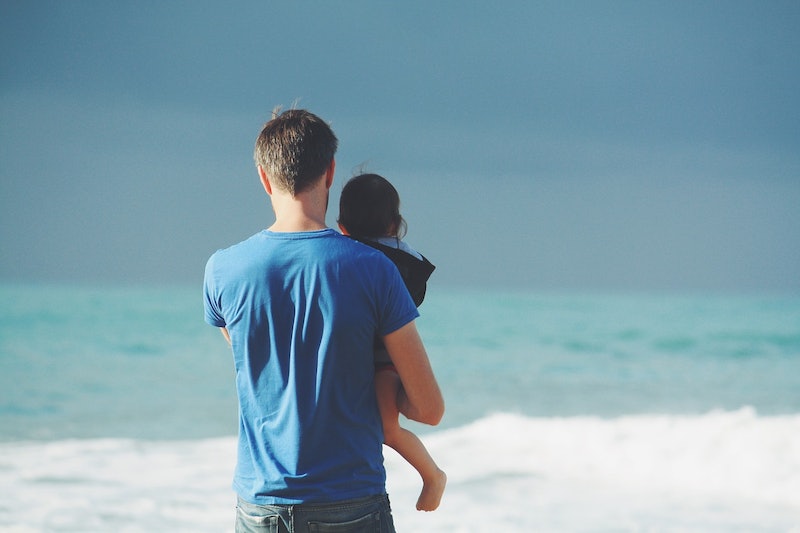 It's not every day that a social media post about changing diapers really captures your attention, but one man's post recently went vital for one precious reason. This dad posted about the changing table in his church bathroom — which was previously non-existent — and it's sending an important message to parents (and the places they frequent) everywhere.

Clint Edwards is the brain behind the blog No Idea What I'm Doing: A Daddy Blog. He likes to take his two children to a local church in Oregon. The men's restroom there didn't have a changing table, so he instead relied on a bench that was mounted to a wall. But then, one day, that went missing as well. With even more limited options, Edwards spoke to some of the people in his church, expressing his frustration and asking for change — and he got it: he showed up one Sunday to a brand new changing table in the men's restroom.

It might seem like a small victory, but it's got a big message. By providing changing tables only in women's bathrooms, we continue to put the responsibility solely on them. Men change diapers too, you know — a point that Edwards clearly gets across in his Facebook post.

Limiting men's options for changing their children's diapers sends the message that they're not supposed to be changing them. How can we expect moms and dads to have an equal part in parenting if resources are only provided to the mother?

Furthermore, one might consider the dad that is out with his child alone — whether the mother is not present, or there's no mother in the picture at all. What's a man to do, change his baby's diaper on the floor of the bathroom? No thank you! What kind of gender expectations are we setting when we tell that dad, "Sorry, you're not supposed to be changing diapers"?

While we know of a handful of superstar moms who aren't afraid to get online and tell it like it is — such as Gylisa Jayne — it's not often we see a dad take the spotlight and discuss the ups and downs of parenting. Edwards is no beginner, though, and more than one of his posts have really resonated with his followers. Take, for instance, a post from March 4, where he described a stressful night out with his toddler, and why we need to cut noisy kids (and their parents) a little more slack:

I think that because we still have these stereotypical expectations that women handle the children while men work, we completely forget that even though the genders aren't yet equal, there are men out there doing "the woman's job." Our culture doesn't yet acknowledge them as one half of the parenting equation, making their voices all the more crucial. Keep up the good work, Clint! Thanks for speaking up for dads (and moms) everywhere.