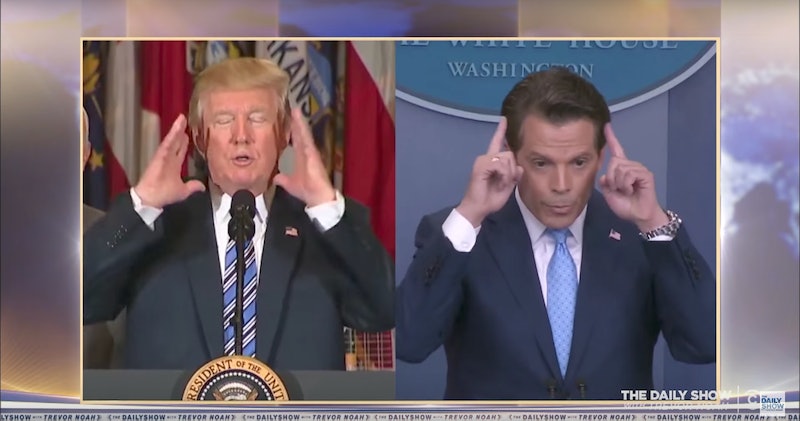 For someone who is relatively new to sucking up to President Trump, Anthony Scaramucci sure has gotten it down to a science. The former Wall Street financier must be a quick study. He was just hired on Friday, but he is already not just on the Trump train but steering too. And The Daily Show has done a mashup to prove just how on board "The Mooch" truly is. Watch Trump and Scaramucci's creepy Daily Show mashup to truly understand the political dynamic between the two.

The clip shows the two on a split screen using the exact same hand gestures. Really, though, they are exactly the same. In order to make their points, both Trump and Scaramucci gesture nearly identically. They wave their hands back and forth, point at their own heads, draw circles in the air, and show their visual limits all in synchronicity thanks to the brilliant Daily Show editors. Background music drowns out what the two are actually saying, but you almost have to assume it lines up too.

Seriously, the new White House communications director is using the same body language as his boss, and there must be a reason. Perhaps it's to convince President Trump that the two are actually on the same page — despite all the evidence from the primaries that they're not. Scaramucci deleted tweets in which he positioned himself as pro-choice, pro-gun control, and a believer in climate change.

Amy Davidson Sorkin tried to figure out exactly when Scaramucci became so enamored by President Trump for The New Yorker. Evidently as recently as last year Scaramucci was criticizing the Republicans for giving space to populism, "caused by the reckless behavior of a man who knows a thing or two about bankruptcy." Sounds like a criticism of the current boss, for sure. Now, though, he's going along with whatever Trump says and even more interestingly praising him:

The President has really good karma, O.K.? And the world turns back to him. He’s genuinely a wonderful human being, and I think, as the members of Congress get to know him better and get comfortable with him, they’re going to let him lead them to the right things for the American people.

Now maybe Scaramucci has always gestured this way. Who knows. But if he did it to support the president, that wouldn't surprise me one bit. Their gestures are just too similar to be a coincidence.