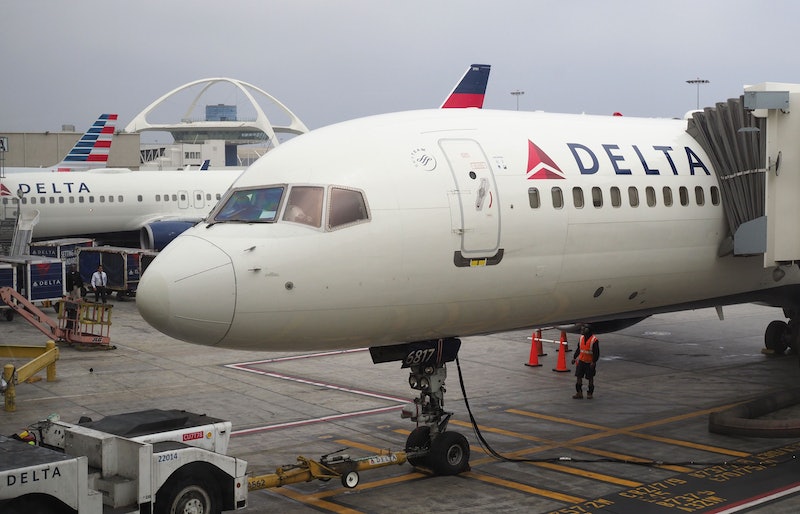 For all you anxious fliers out there, this may not be the post for you. As Hurricane Irma closed in on Puerto Rico on Wednesday, all of the commercial flights coming into San Juan turned around and diverted to other airports, not wanting to risk flying into one of the strongest hurricanes ever recorded. All except one. One pilot decided to take up the challenge, and the Delta flight flew directly into Irma. Not only did it land safely, but it re-boarded and took off back to New York, escaping the swirling 185 mph winds somehow unscathed.

Self-proclaimed aviation geek Jason Rabinowitz documented the harrowing series of events on Twitter and brought the story to light by live tweeting the plane's movements while he tracked the flight on radar. Flight 431 caught his attention when it was the only flight on the radar headed for Puerto Rico that didn't turn back. Rabinowitz posted an image of two JetBlue flights and one American Airlines flight turning around off the coast of the island, and then addressed the rogue flight in his next tweet, saying "You really want to fly into SJU during a category 5 hurricane, DL431? Everyone else has turned around."

At the point where the other flights had turned back, it soldiered on. When the flight landed in San Juan, the crew knew a quick turnaround was key to getting out before the storm grounded them, and they absolutely crushed it. Only 40 minutes transpired between arrival and departure, and the flight took off 25 minutes ahead of schedule.

The flight out took impressive maneuvering, as much is clear even to someone with zero aviation knowledge when you look at the radar images Rabinowitz posted. The plane was able to fly out of Puerto Rico in a small gap between Irma's outer band and the core of the storm.

“Our meteorology team is the best in the business,” Erik Snell, vice president for Delta operations and customer center told The Washington Post. “They took a hard look at the weather data and the track of the storm and worked with the flight crew and dispatcher to agree it was safe to operate the flight. And our flight and ground crews were incredible in their effort to turn the aircraft quickly and safely so the flight could depart well before the hurricane threat.”

The flight was reportedly the last one in and out of San Juan. Conditions worsened after it departed, and air traffic control ceased operations. People following the story were in awe of the pilots, air traffic control, and all others that had a hand in this incredible operation, and rightfully so. Though going up against a historically catastrophic hurricane is probably not something the crew wants to go through every day, everyone on that plane now has a great story for where they were during Hurricane Irma.