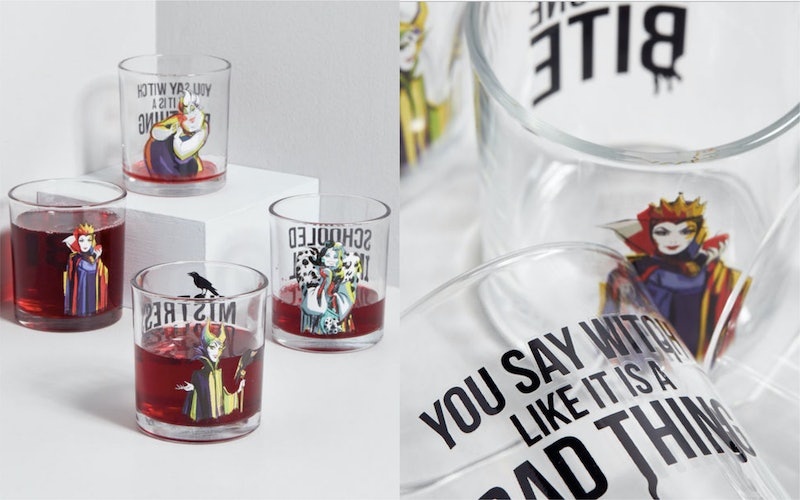 Furnishing your bar cart is a vital, but not often talked about aspect of having your own place. While you might have put extra thought into what duvet to get for your bed, maybe you should have thought a little more thought into what you'll serve guests with during your next soiree. Glasses are the rare kitchen accessory you likely use every day. With this in mind, it pays to get some that you actually enjoy looking at. Luckily, ModCloth has something extra special in store that is bound to become your favorite piece of homeware: a Disney Villains Glass Set.

The Evil Does It Disney Villains Glass Set is a set of four highball glasses, each with different villain-inspired art decorating the exterior. Showing off your Disney love during adulthood can be a difficult line to walk, but the designs on these are so posh, you might even forget the fact they were inspired by a kids' movie. Plus, you know, they're intended for cocktails and liquor drinks, so that is itself makes the glasses definitively not for kids. Really, highball glasses can be used to hold almost anything you want to sip on, so there's basically no way these won't become your favorite kitchen staple.

The four villains depicted on the glasses are Cruella de Vil from 101 Dalmatians, Ursula from The Little Mermaid, Maleficent from Sleeping Beauty, and The Evil Queen from Snow White (seen holding an apple). Opposite each image on the other side of the glass is a cheeky saying to complement the character. The Cruella de Vil one reads "Schooled in Cruel'; the Ursula one reads "You Say Witch Like Its A Bad Thing"; the Maleficent one reads "Mistress of All Evil"; and the Evil Queen one reads "Just One Bite." True Disneyheads will notice the text on each complements the villain with which it is paired. If your guests don't get the reference, you can explain it to them. See? These glasses aren't just cute, they're a conversation starter!

If you want to really go all out, consider making the Disney princesses and villains the central theme in your kitchen. There are countless kitchen accessories modeled after the ladies of Disney. For instance, in September Shop Disney dropped The Princess Baking Set. The set, which comes with two mixing bowls and two whisks, sport a design with basically every princess to grace the screens on a Disney film. Ariel, Aurora, Cinderella, Jasmine, Merida, Mulan, Rapunzel, Snow White, Tiana, and Pocahontas adorn the exterior of the bowls. Not to mention, the metal part of the whisks are pink and purple.

The Disney ladies, whether good or evil, are icons. There is no better way to spice up your kitchen than serve ware honoring the most recognizable animated femme fatales..

More like this
How To Incorporate Goblincore Into Your Home Decor This Fall
By Alexis Morillo
The 5 Best Sheets For Your Purple Mattress, According To Reviewers & The Brand
By Vanessa Spilios
The Industrial Home Decor Aesthetic, Explained
By Emma Carey
6 'Game Of Thrones' Halloween Costumes That Aren't Overdone
By Nina Kahn
Get Even More From Bustle — Sign Up For The Newsletter