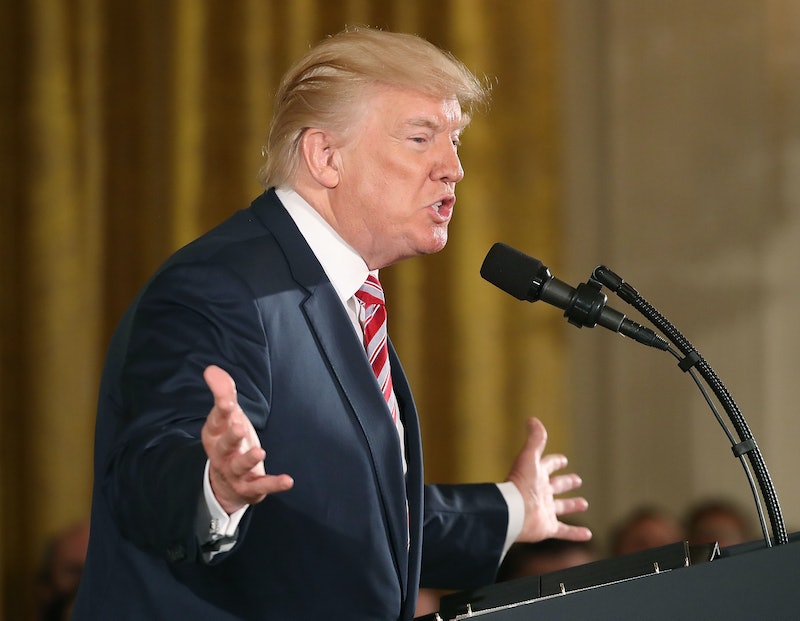 There's an unwritten law of the Internet that there are just some things that, once you look at them, can't be unseen — and this drawing of Donald Duck that looks like Donald Trump is one example. It simply cannot be unseen.

At first, this disturbing optical illusion might seem like another thing for parents to share between Minion memes on Facebook. You might blink a few times, make sure your eyes adjust just right, and think about that creepy young girl/old woman illusion — but then you see him (them?): Donald squared.

The dazed, stoned-looking eyes, classic beak, and wispy feathers of this Donald Duck become the other Donald with just a flip of the frame— the eyes become tired and squinty, the little feather in the middle of his face becomes a tiny pouty mouth, and the beak becomes the iconic-if-unnatural arrangement of brassy blonde hair.

Maybe our threshold for what we find hilarious and captivating is off-kilter in the whiplash-y, shared fever dream of Trump's America — or maybe this is exactly as duckin' hilarious and mesmerizing as it seems.

Naturally, Weird Twitter and the masses on Facebook were not only ready to receive this revelation with enthusiasm but to LVL up — taking the meme to greater, manic heights throughout the next few days.

This Is Like Lindsey Lohan In The Parent Trap, Right?

Some Other Theories Got Even #Darker

Others Took Some Shots At POTUS 45 & Donald Duck

And Some Came To Donald's Defense

I suppose a nostalgia-driven optical illusion/cutesy observation like this one is just about the most gentle follow-up one can imagine coming off the delirious, fever dream-y energy of those 3 a.m. "covfefe" jokes. I'd go as far to argue that duck, duck, Donald is by far the most benign, uncharacteristically calm meme to slink out of 2017. People are excited about it, but it doesn't have that whole "Gretchen Wieners had cracked" vibe about it.

But just the same: Maybe everyone should still go take five and come back to the Internet once they can get a few consecutive hours of sleep?