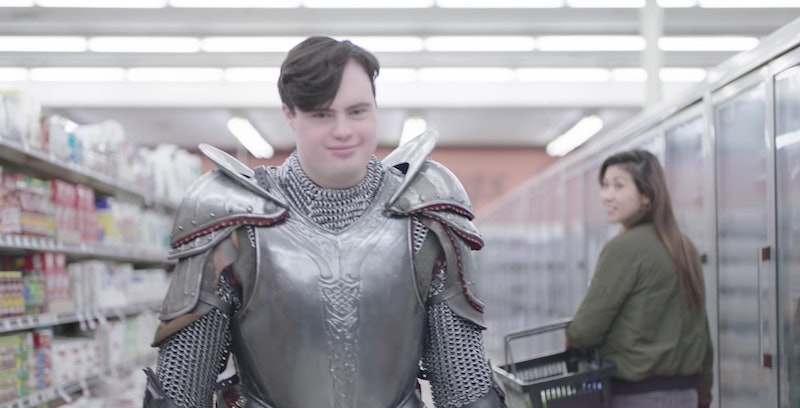 The video was part of the #NotSpecialNeeds campaign for World Down Syndrome Day, which was this past Tuesday. It features actors with Down syndrome like Lauren Potter, who you may know as Becky on Glee, as well as Sam Suchmann and Mattie Zufelt, two friends who created the zombie action movie Spring Break Zombie Massacre. The video for World Down Syndrome Day shows scenarios that would actually be categorized as special needs, like requiring cat massages or having to wear a suit of armor. It emphasizes that what many people with Down syndrome need are education, jobs, and opportunities, asking, “Are these needs special?”

Celebrating World Down Syndrome Day on March 21 is significant. It’s a reference to the third copy on the 21st chromosome, which causes Down syndrome. Categorized as a genetic disorder, Down syndrome is often associated with certain facial features (like eyes with an upward slant) as well as physical and cognitive development delays. According to the National Down Syndrome Society, about one out of every 700 babies in the US is born with Down syndrome. As one of the most common chromosomal conditions, there are currently more than 400,000 people with Down syndrome in the US.

Disability rights journalist David M. Perry wrote about this year’s video for The Establishment. It’s well worth the five minutes Medium says it will take you to read. Perry’s decoding of the term ‘special needs,' using his experiences with his son, is the summation of what the Not Special Needs video is about.

My son, who has Down syndrome, is 10. By the time he was 3 (thanks in part to spending his first few years reading everything I could get my hands on), it was pretty clear to me that while he had particular needs, they weren’t all that special. He needs an education, safe housing, independence, meaningful community, health care, and basically all the other stuff that everyone else needs. Our means to get him there might vary and require specific techniques, tools, and resources, but it’s not because his needs are so ‘special.’

Perry goes on to talk about how the word ‘special’ has become an insult in its own right. Calling someone or something ‘special’ has become the ‘r-word’ in disguise. When a word associated with disabled people is co-opted as an insult, it takes the language used to advocate for disabled rights and makes it negative.

As Perry also points out, phrases like "special needs" are often used for the comfort of others. There is the notion that we need to "look past" our differences. But in the same way that being "color blind" doesn’t address the fact that racism still exists, ignoring a person’s disabilities doesn’t work to help them.

The campaign is not arguing semantics. It’s emphasizing the fact that words matter, especially when talking about communities who don’t often get to speak for themselves. Not Special Needs opens a conversation that needs to be happening and amplifies the voices we need to hear the loudest.