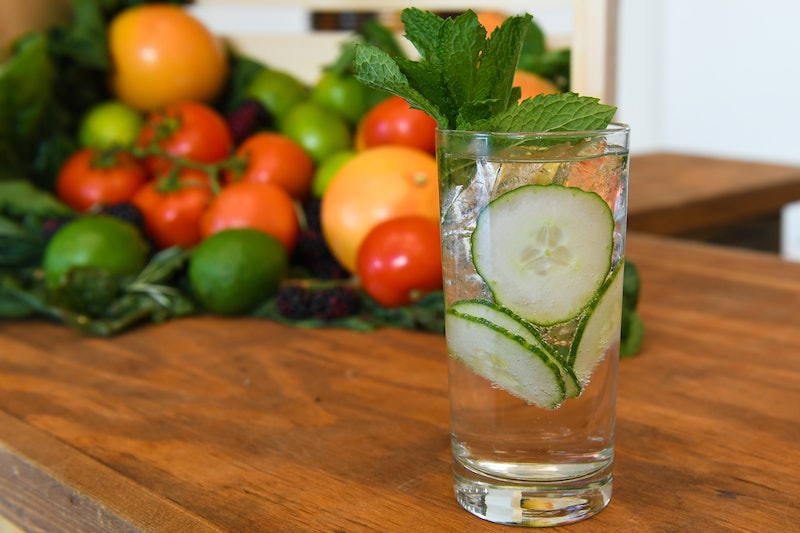 Ah, the holiday season. A time to feel warm and fuzzy and wonder if that’s from the holiday spirit or the holiday spirits you’ve been downing in Grandma’s liquor cabinet. No one wants to wake up Christmas morning bleary-eyed and unable to move. Thus, the internet is full of weird ways to get rid of your hangover, from downing pickle juice to eating honey on toast to the old wives’ tale of having another drink in the morning. However, if you’re looking to prevent the throbbing headache, nausea, general feelings of “omg what have I done,” there is one drink that will keep your holiday season relatively hangover free.

Actually, there are two drinks. The first one is water. For the love of White Claw, please remember to drink regular, alcohol-free water when you’re imbibing. Mayo Clinic’s general rule is to have one glass of water after every alcoholic beverage. Not only will this keep you hydrated — dehydration is both a symptom and cause of hangovers — but it’s likely to reduce the amount of alcohol you’re drinking. And drinking alcohol in excess is — if you can believe it — the primary cause of a hangover.

Of course, you came here for a magical alcoholic elixir that will make your extended family tolerable the following morning hangover-free. And so I say unto you: Vodka soda. Vodka sodas will bring you holiday cheer and help you avoid that less-than-cheerful morning after.

Gimme Some Science And Another Vodka Soda

In general, sticking to clear liquor is a good rule of thumb when it comes to preventing hangover. Clear liquors like vodka and gin have “fewer toxins and impurities than dark ones like whiskey and rum,” Elizabeth Kovacs, PhD, director of the alcohol research program at Loyola University, told Cosmopolitan. Those “toxins” Kovacs is likely referring to are congeners, which are substances other than ethanol found in your liquor that are produced during fermentation. According to Mayo Clinic, “Beverages with fewer congeners are slightly less likely to cause hangovers than beverages with more congeners, but remember that all types of alcohol can result in a hangover.”

You’ve likely heard of tannins, which are found in wine and are an example of said congeners. “When alcohol breaks down, our bodies recognize that those congeners are toxic, and the kidney tries to flush them out, so it's pulling water from our bodies to dispose of them,” Chaun Cox, M.D., a physician with Mayo Clinic Health System told Food 52. “We lose things like sodium, potassium, and other essential elements in the process. Then, we feel miserable: muscle aches, headaches, etc.” In other words, more congeners can mean more things our body reads as “toxic” means a worse hangover.

What If College Ruined Vodka For Me?

If you’re not that into vodka, there is hangover-free hope for you yet. Gin, another clear liquor, is said to be less likely to give you hangovers the next day. Try opting for a martini, which is made with gin, vermouth, and often an olive which, if you think about it, is basically a fruit.

Still want to dabble in something other than gin or vodka? As a mixer, club soda is the way to go if you’re looking for something sugar-free, which may help reduce your chance of a hangover. However, there is some debate on whether sugar hinders or helps hangovers. One 2013 study on diet soda and alcohol found that using diet soda a mixer can actually make you drunker. However, researchers clarified that diet soda doesn’t actually accelerate intoxication. Instead, the sugar in non-diet sodas helps slow down the rate of alcohol absorption in your body.

Additionally, too much carbonation might be making you feel worse the morning after. “Fizzy alcohol will make you feel the effects of alcohol more quickly as the bubbles increase the pressure in your stomach,” according to BBC, “forcing alcohol into your bloodstream faster.” So, you might want to avoid sipping solely on sparkling wine.

Unfortunately, congeners and clear alcohol may still leave you with a hangover. “High levels of alcohol in the brain have fairly recently been shown to cause neuro-inflammation, basically, inflammation in the brain,” researcher Boris Tabakoff at the University of Colorado, Boulder told NPR. In other words, water and aspirin may still be your ticket to a hangover-free holiday.