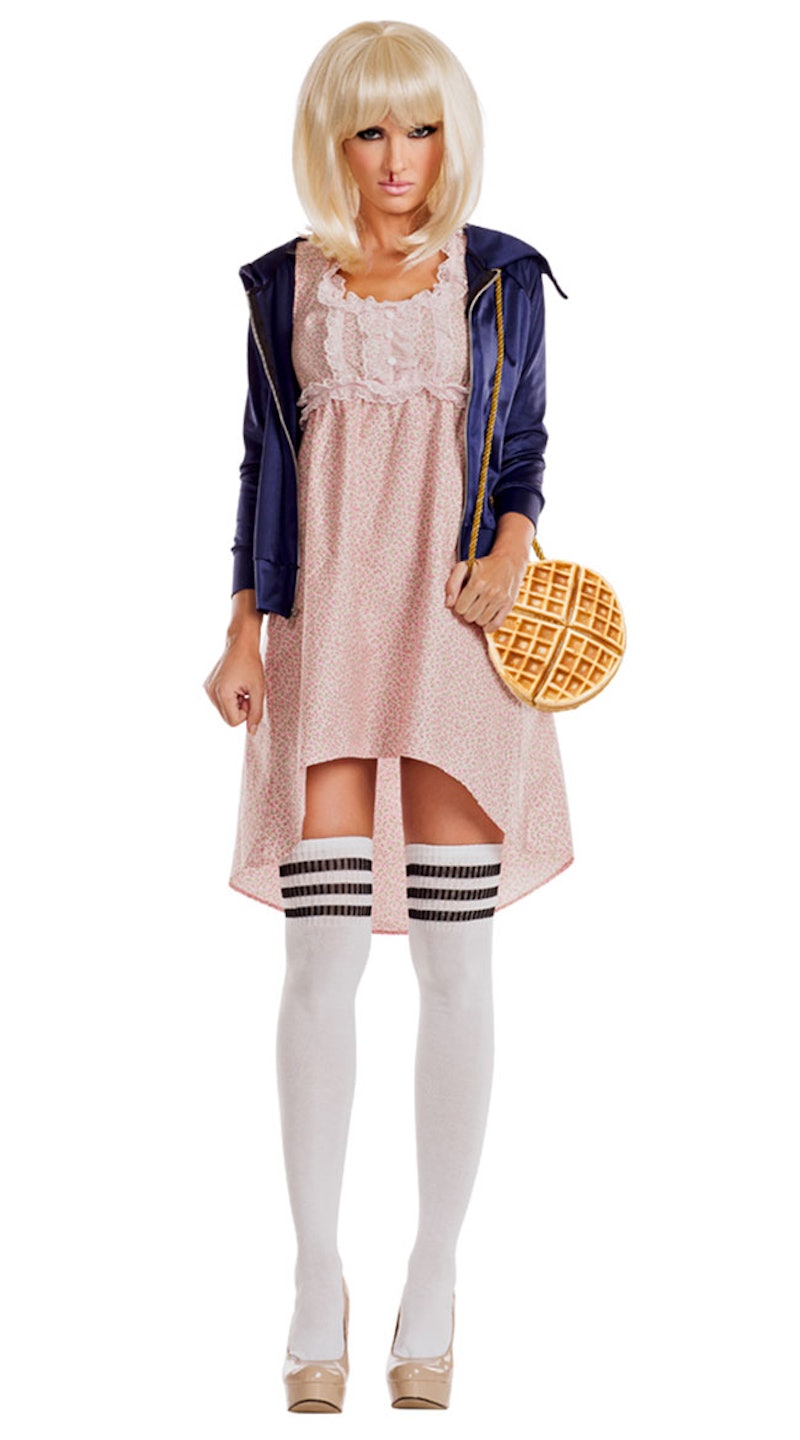 Halloween costumes are supposed to be creepy. The fake blood and ghoulish alter egos are meant to make people cringe in horror. The spooky holiday is founded on the notion of "the creepier, the better." But this Halloween costume inspired by Stranger Things' Eleven is creepy in all the wrong ways. In fact, it is downright disturbing.

E-tailer Yandy.com sells a variety of sexy specialty and cosplay apparel for women, including sultry adult Halloween costumes which take inspo from the likes of Cher in Clueless, Pennywise from It, and Wonder Woman. Now, they are selling this Eleven-modeled costume. Sexy Halloween attire is all well and good, provided that it is empowering to the wearer. But that is only when the inspiration for the costume is a character or pop culture icon of an appropriate age. That's hardly the case here.

The costume modeled after Eleven clearly has elements meant to up the sex appeal of the outfit. But on the TV show, Eleven, who portrayed by 13-year-old powerhouse actor Millie Bobby Brown, is just a young girl. For Yandy to [sell a costume] that sexualizes a character played by the barely teenage Brown is plain disgusting and problematic.

Bustle reached out to Yandy for comment on the costume. The brand had no comment, other than to note that it is not a Yandy exclusive.

The tone-deaf "Upside Down Honey" costume will leave you shaking your head in disbelief. Yandy isn't masking the inspo, though the name of the costume doesn't directly reference Stranger Things assumingely to prevent copyright infringement. This costume clearly depicts Eleven, from her beloved Eggos to her pink frock.

The costume is described as "featuring a powder pink babydoll dress with a ruffled bust, white buttons accents, a navy bomber jacket with long sleeves, white thigh high socks with striped tops, and a waffle purse. (Wig not included)."

The high-low hemline of the dress creeps up to show more skin than Eleven's knee-length dress. Pair that hem with thigh high socks instead of child-like ankle socks, and you have a purposeful nod to sexy knee-high stockings. The neckline of this outfit also comes down further than Elven's Peter Pan neck-high collar. And finally, the costume is styled with a pair of stilettos, which is definitely not what Eleven would wear while in the forrest.

While wanting to bring the sexiness at a costume party is completely fine, it's inarguable that pulling inspiration from Eleven to do so is troubling. That should be especially clear when altering her girlish look to sneak in nods to sex appeal.

Sure, you could argue that this costume certainly isn't even the most inappropriate costume we've ever seen. We have cultural appropriation to thank for that. But it does beg us to question which "sexy Halloween costumes" are truly OK.

Through this costume, the brand was not trying to make a radical statement by empowering women through sexiness. The company clearly wants to capitalize on the popularity of Eleven costumes, which were all the rage in 2016. But creating a costume that ups a hemline and lowers a neckline to favor the male gaze isn't a viable way to honor a young girl's look — or to empower any woman.

When you think about the costume critically, you realize it's not just a simple, sexy, and harmless Halloween costume. This is a young girl who deserves respect, and costume creators would do well to remember that.