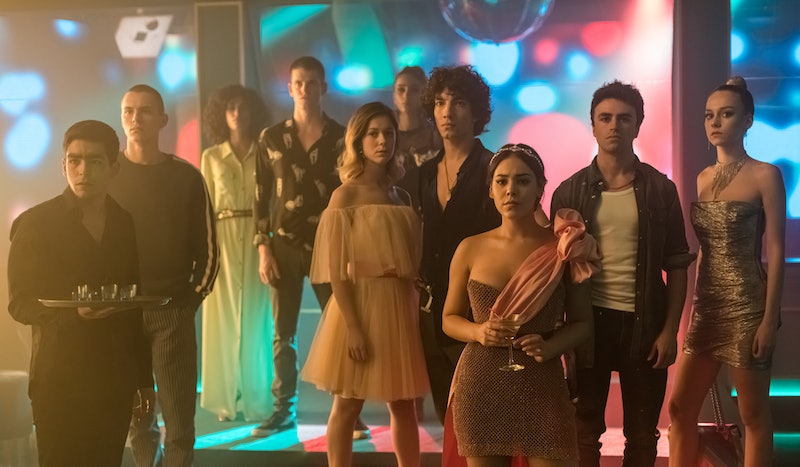 The lives of Las Encinas' students are so messy, keeping up with them can be like homework… very sexy, entertaining homework, that is. Fortunately, this Elite Season 2 recap is exactly the crash course you need before the show's third season returns with more murder, mayhem, and threesomes.

In order to fully understand the events of Season 2, it's important to remember where things left off in Season 1. That season introduced new scholarship students Samuel, Nadia, and Christian to the elite hallways of Las Encinas, where they were quickly embroiled in the petty games, rivalries, and backstabbing of the school's spoiled rich kids. This ultimately led to the death of Samuel's rebellious crush Marina. Samuel's bad boy older brother, Nano, was arrested for the crime, but it was actually classmate Polo who did the deed. He killed Marina in a struggle over an expensive watch that Nano had stolen from his girlfriend Carla's father in order to fund his new life with Marina, who was pregnant with Nano's child...only it turned out that the watch was hiding a USB drive containing incriminating evidence against Carla's father, which is why she tasked Polo with recovering it.

Got it? Good, because things only spiraled more out of control in Season 2. Here's a refresher.

Season 2 immediately made its increased stakes clear by swiftly and shockingly cutting out fan favorite character Christian. After spending a guilt-ridden summer in his thruple with Carla and Polo, who he'd helped cover up Marina's murder, he finally decided to go to the police. However, after Carla tipped off her dad, Christian was run off the road and nearly killed; Carla's dad "generously" offered to fund Christian's recovery… in Switzerland… and Christian was never seen again. (For now, at least.)

After Christian's attempted murder, Samuel became suspicious of Carla's involvement in Marina's death. He concocted a scheme to get close to her, which of course involved seducing her — and which of course ended with Samuel and Carla actually falling for each other. Carla was horrified when her new lover suddenly went missing, and suspected her father took out another Las Encinas student in his continued efforts to cover up Season 1's crimes.

While Marina's murder served as the Season 1 mystery, Season 2 revolved around Samuel's disappearance. Was he kidnapped? Murdered? Did Carla's father do it? Or someone else? Turns out that Samuel faked his own disappearance with the help of Marina's brother, Guzmán, in order to draw a confession out of Carla. Fearing for Samuel's safety, she confessed everything to the police. When she then found out that Samuel was alive and had manipulated her, she was understandably furious.

In order to fill Christian's absence, Elite introduced three new students. One of them was Rebeca, who grew up poor and therefore has a chip on her shoulder amidst her rich classmates. She claimed she could afford to attend Las Encinas because her family won the lottery, but the truth is that their money comes from Rebeca's mom's drug empire. Rebeca developed a crush on Samuel and offered him a job running drugs for her mom in order to help him raise bail money for Nano, but she was upset when he fell for Carla instead of her.

Another one of the new students is Lucrecia's half-brother Valerio (they share a father but have different mothers), who returned to Las Encinas after having spent some time at a boarding school. It turns out that he and Lu have a long-running forbidden romantic relationship. So, Valerio struck up a friendship with Nadia and conspired to split up Lu and Guzmán so Nadia could be with Guzmán and he with Lu. Unfortunately, their father walked in on Valerio and Lu in a compromising situation in the Season 2 finale.

In their ongoing war over Guzmán, Lu tried to blackmail Nadia, ordering her to fail an important exam or else she'd tell Nadia's conservative parents about her relationship with Guzmán. However, Valerio gave Nadia the intel she needed to blackmail Lu right back: she threatened to out the two's incestuous relationship to the whole school.

While Lu and Nadia fought over him, Guzmán was more concerned with vengeance for his dead sister. Believing that Nano was truly responsible for Marina's murder, he was hostile towards Samuel for much of the season. He was horrified to finally learn that his sister's real murderer was Polo, his own best friend, and conspired with Samuel to entrap Carla into confessing.

After befriending new girl Rebeca, Nadia started letting her down hair — literally — and finally consummated her flirtation with Guzmán. Unfortunately, a video that Valerio took of them hooking up was spread around the school by a vindictive Lu. An ashamed Nadia eventually confessed everything to her parents, who surprisingly comforted her.

After getting out from under his father's oppressive influence and moving in with Ander and his supportive mom, Omar began to flower, going out more and dressing more flamboyantly. This put a strain on his relationship with Ander, who wasn't sure he liked all the changes Omar was making.

Omar's new style wasn't the only thing putting stress on Ander; after Polo told him the truth about killing Marina, the guilt and stress of keeping such a massive secret slowly ate away at Ander from the inside out. He started drinking more and pushing Omar away — and after Guzmán learned the truth about Polo and that Ander knew, he lost his best friend as well. Fortunately, Ander and Omar were able to reconcile in the finale.

The third and final new student is Cayetana, a wealthy socialite and social media influencer… at least, that's what she wanted everyone to believe. In reality, her mother is a maid and she's on scholarship; she was posing as a rich girl by "borrowing" clothes from the homes of her mother's clients and throwing lavish house parties while they were away. She tried to throw a fake charity dinner to raise money for herself and her mother, but when Lu got involved, it spiraled into a massive event. When Lu learned the truth, she unmasked Cayetana as a fraud in front of everyone.

In the wake of murdering Marina, a depressed and suicidal Polo found himself drawn to Cayetana. After her fake fundraiser backfired, he gave her the money she needed to cover expenses — and then some — telling her that everyone deserves a second chance. When the truth finally came out about Marina's death, Cayetana returned the favor: she recovered the murder weapon from the lake where Polo threw it and hid it in her locker, helping to cast doubt on Polo's confession. Polo then returned to Las Encinas, much to the surprise of his classmates, who assumed he would be locked up and gone for good.

What will they do now that they know the truth and Polo is still roaming free? The halls of Las Encinas are a veritable powder keg ready to explode in Season 3.