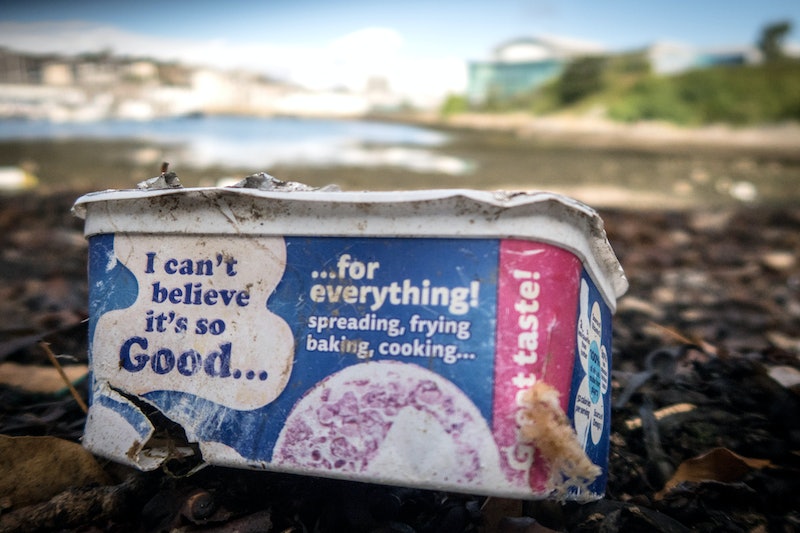 Sometimes great discoveries happen by complete accident. Penicillin was discovered by Alexander Fleming when he accidentally left a petri dish out in his laboratory in 1928, for instance. And now an unintended discovery by English scientists who were trying to solve the world's trash problem might make it a lot easier to dispose of plastic waste. How? By feeding it to a hungry enzyme that evolved in a dump and was accidentally improved in a laboratory. No, this isn't Little Shop Of Horrors, 21st-century style; this is real life.

The story begins in Japan in 2016, when flabbergasted researchers found that, in various bottle-trash sites around the town of Sakai, there was a flourishing bacterium that was happily "eating" the plastic, according to the BBC. The bacterium, it turned out, produced an enzyme that was an expert at "degrading and assimilating" PET, a type of plastic that's often used in bottles and is meant to be recyclable — up to a point. The Japanese bacterium, technically called Ideonella sakaiensis, ate up the plastic and made it into biodegradable material, effectively recycling it. It was a thoroughly bizarre phenomenon, and scientists nicknamed it PETase and took it off for a lot of study.

Fast forward to now, when scientists at the University of Portsmouth and the National Renewable Energy Laboratory announced that, not only had they figured out the internal structure of PETase, they'd accidentally made it better. The process of accidentally inventing a new enzyme is a pretty complex one, but it seems that the scientists wanted to figure out how the bacterium worked. They noticed, when they were poking around it, that it looked quite similar to a kind of enzyme called a cutinase, which is found in fungi like mushrooms and mold.

Was PETase some kind of weird evolved fungus that had developed the ability to eat Evian bottles? To find out, they made a new version of the enzyme — and found, to their astonishment, that their new creation was actually better at eating plastic. Ten points for proving a theory, and about four hundred more for accidentally improving a trash-monster. “Serendipity often plays a significant role in fundamental scientific research and our discovery here is no exception,” one of the lead scientists said in a press statement.

This sort of thing doesn't happen all that much. But the plastic-eater is presenting a hopeful answer to a really, really big problem. The scale of plastic pollution is unprecedented. The BBC reported in 2017 that the world is dealing with 6.3 billion tons of plastic waste right now, and that number's growing every year. Plastic will likely outweigh fish in the sea by 2050, there are vast floating "trash islands" in the oceans that are largely made up of plastics, and things like diapers and bottles will take up to 450 years to biodegrade naturally. This bacterium may be a way to make some of the world's most difficult trash disappear in a healthy way.

Before you get over-excited and start trying to feed your plastic bottles to your mushroom patch, though, the bacterium isn't going to be put into trash piles to start pulling a Pac-Man just yet. We don't yet know how it would affect things like plant life, ocean ecosystems or fish health out in the wild. And we still don't know exactly how it works or how it came about — though it's a pretty good guess that some bacteria inside the Japanese trash dump evolved to survive on a plentiful food source. It's a big hope for the future of plastics pollution. But it doesn't mean you can stop putting your apple juice bottle in the recycling bin.