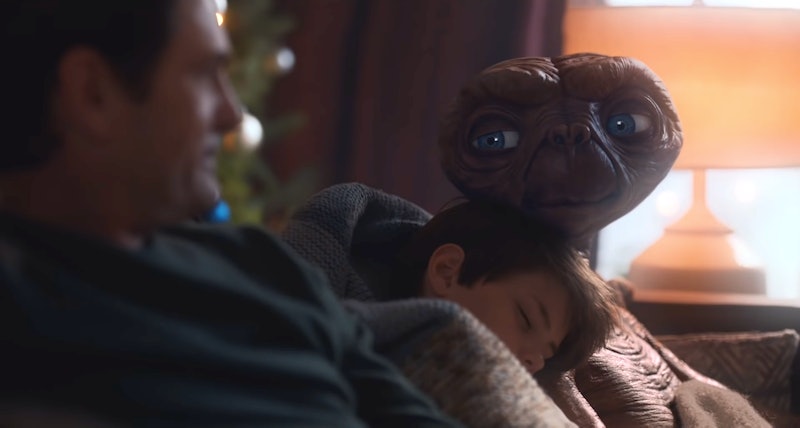 E.T. phoned himself home at the end of the 1982 movie, but 37 years later, he has returned to Earth. In Xfinity's holiday commercial, the extraterrestrial learns about the new technology that's been developed on the planet since he left, but he also gets a sweet reunion with Elliott that doubles as a mini E.T. sequel. Just like in the original movie, E.T. arrives outside of Elliott's house, except this time around, it's Elliott's son and daughter who discover the alien. Initially, E.T. mistakes Elliott's son for Elliott himself, but then adult Elliott (reprised by Henry Thomas) comes out to explain that he has a family of his own now. While in Elliott's home, E.T. shows off his ability to revive flowers and his enduring love for Reese's Pieces. He even gives Elliott's kids the ride of their lives as they fly on their bikes past the full moon — something E.T. and their dad did decades before.

However, watching Elliott with his family as they go sledding, E.T. starts to miss his family as well. As it turns out, E.T. also has a wife and child now, who he shows off with some alien tech that's reminiscent of the hologram projections in Star Wars. He decides to head back to his planet and family, but not before telling Elliott's son, "I'll be right here." He uses his glowing finger to point to the child's heart; in the movie, E.T. said this exact line as he pointed to Elliott's head.

E.T.'s heart glows as he says his goodbyes to Elliott's family, but in a change from the film, Elliott's son's heart glows, too. The radiating light comes from the alien technology E.T. left behind so that they can connect with him from galaxies away.

Thomas, who has more recently delved into the horror genre with The Haunting of Hill House and Doctor Sleep, told Deadline he decided to do the commercial because, "The audience is going to get everything they want out of a sequel without the messy bits that could destroy the beauty of the original and the special place it has in people's minds and hearts."

And though the ad wasn't directed by Steven Spielberg, according to Deadline, the filmmaker was consulted and approved of the concept. So with his Thomas' involvement, this is about the closest thing to an E.T. sequel that fans can expect to get. Still, the commercial makes one thing abundantly clear: E.T. and Elliott's loving bond can transcend time, space, and format.

More like this
Alicia Silverstone Revives Her 'Clueless' Character In This Super Bowl Commercial
By Jake Viswanath
James Cameron May Come To Regret His 'Titanic' Door Experiment
By Stephanie Topacio Long
Taylor Lautner Copped To Finding Jacob "A Little Annoying" In Twilight
By Stephanie Topacio Long
Reese Witherspoon Confirms This Fan Favorite Will Return For 'Legally Blonde 3'
By Jake Viswanath
Get Even More From Bustle — Sign Up For The Newsletter
From hair trends to relationship advice, our daily newsletter has everything you need to sound like a person who’s on TikTok, even if you aren’t.