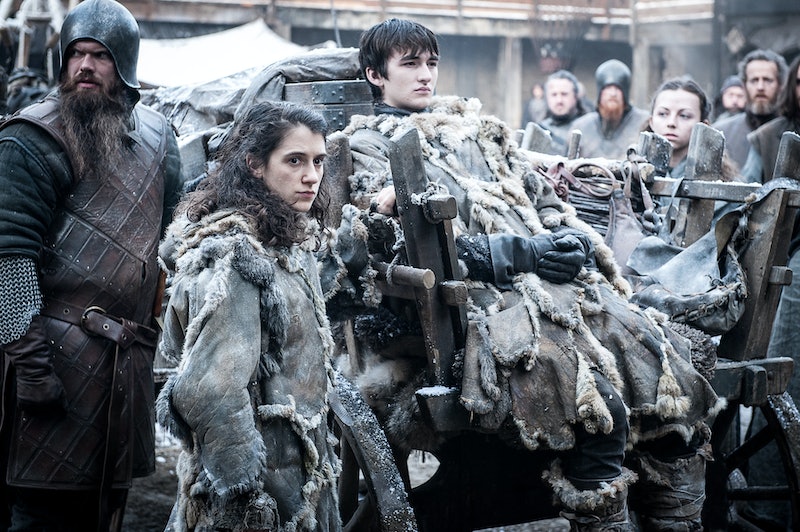 Game of Thrones fan theories often feel more like a fun bit of guesswork used to distract viewers during the painful weeklong separations between new episodes than something that could actually plausibly occur on the show. Yet, quite a few of them have actually come to pass— case in point, the recent death of Viserion and the creation of an ice dragon. This lends credibility to the idea that another popular fan theory might actually be true, and some eagle-eyed fans found some further proof that Bran Stark is the Night King during "Beyond the Wall".

If for some strange reason you don't spend all your time combing Reddit for GoT fan theories, let me catch you up to speed. Basically, the idea is that after two failed attempts to go back in time to stop the White Walkers (once by whispering "burn them all" to the Mad King and making him go mad, and once by warging into Bran the Builder and constructing The Wall) Bran decides to travel all the way back to when the Children of the Forest first created the White Walkers, in the hopes of stopping it from ever happening. But the plan backfires, and the human he wargs into is stabbed in the heart with dragonglass and becomes the Night King, trapping Bran inside.

If this sounds far-fetched to you, there was a clue during an episode that might give more weight to this theory. It seems like Bran and the Night King might be wearing matching outfits. #Twinning!

When the Night King emerges to throw an ice spear at Viserion (RIP reptilian friend), you can see that he's wearing an outfit almost identical to the one that Bran favors. And before you @ me, costuming has had very symbolic meaning on Game of Thrones in the past. Think of all the times Sansa's looks have changed to reflect her influences.

Some other fans even think that the Night King's appearance in recent seasons has been altered to further resemble Bran. They do seem to have similar face shapes and noses.

If this theory is true, that means that Jon Snow's greatest enemy has been his younger brother all along. And in the end, Jon might be faced with a moral dilemma— does he kill the Night King, if it means killing his brother? We know how much family means to Jon, so surely this would be a really difficult choice for him to make.

Maybe that's why the writers have made Bran so dang unlikeable since he became the Three-Eyed-Raven: So when Jon has to slay him, we're kinda secretly happy about it. Sorry Bran/Night King, that's what happens when you can't even fake happiness at a family reunion.