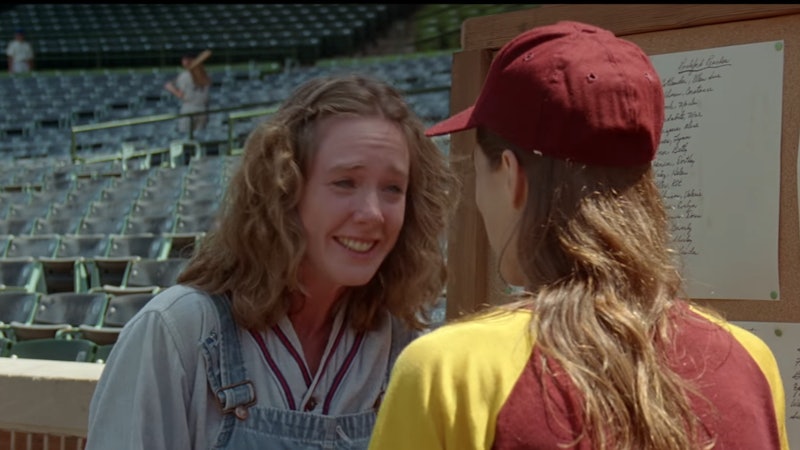 Marshall's daughter Tracy Reiner was cast in the landmark movie before her mother came aboard as the director, and it was her involvement that brought the movie to the Big director's attention. In the clip, Reiner reveals the movie was going to be sold when the original director left, but then her mother stepped in to direct the film. Interestingly, the first director was a man, and I think everyone can agree that the idea of A League of Their Own not being directed by a woman feels wrong on every level. Marshall was without a doubt the right person for the job.

According to actor Anne Ramsay, it was Marshall's passion for the real life All-American Girls Professional Baseball League that ensured the film was made, and Ramsay is still thanking the director to this day. In the clip, Ramsay says,

"We actually got to do this thing thanks to Penny Marshall being so passionate about these women from the World war II era. I thank Penny all the time for that experience, and what she did, and what she did for me."

With care and an eye toward historical accuracy, Marshall brought every one of the film's female baseball players to life with warmth, humor, and grit.

A League of Their Own is such an iconic film that it doesn't feel like it was made 25 years ago. Marshall did an amazing job of making the story feel timeless, and it's clear from the interviews that the actors still feel honored to have been part of bringing the uniquely feminist sports story to life. The movie that taught the world there's no crying in baseball also taught a generation of women they should always follow their dreams, even if it meant breaking into the boy's club to make them happen.

Thanks to Marshall, A League of Their Own not only got made, it became a modern classic and an ode to the real life women who took the field when war called the men away. With the 25th anniversary being celebrated this year, now is the perfect time to revisit the Rockford Peaches, and delve deeper into the fascinating backstory of one of the best sports movies of all-time.

A League of Their Own's 25th Anniversary Blu-Ray edition will be available on April 18.